I spent a lot of time this year on the Greek Islands and was always flying out of Athens or Corfu to travel around, and the logical choice was to use one of my favourite airlines in Europe. Aegean! Over the last 12 months, the airline has been investing in new lounges, and introduced a new business class service called Gastronomics. Economy class hasn’t changed that much, but they’re still handing out delicious Greek-inspired dishes for free in economy class, which is a bit of rarity these days when flying around Europe.

In this review/rundown of Aegean, I will cover the domestic economy/business service, international economy and business class offerings plus the new lounges in Athens. I hope you enjoy it!


I visited Newrest the airline’s caterer in Athens in the summer of 2017 for the Inflight Food Trip documentary, here I was able to get a look and some of the menus that they created for Aegean.

Depending on where you are flying to/from Aegean will serve your meal on a tray or on shorter flights you will receive a boxed meal concept.

In business class on international services, it’s always a tray service concept, but the meals will vary depending on flight duration.

Domestic flights in Greece are very short, sometimes as short as 35mins, so to keep it easy for the crew the following concepts are served.


On Greek domestic services Aegean are still offering a range of drinks and snacks for free (Note that on International flights from Kalamata, Heraklion, Rhodes and Corfu you can purchase a limited variety of alcoholic beverages for a fee). You’ll get a typically Greek snack/sweet product plus a choice of drinks.

Flying on International services? Expect a small snack box or meal tray service consisting of typically Greek traditional items. Local ingredients where possible with authentic Greek recipes, yes even in economy class the meals can be fantastic on Aegean. 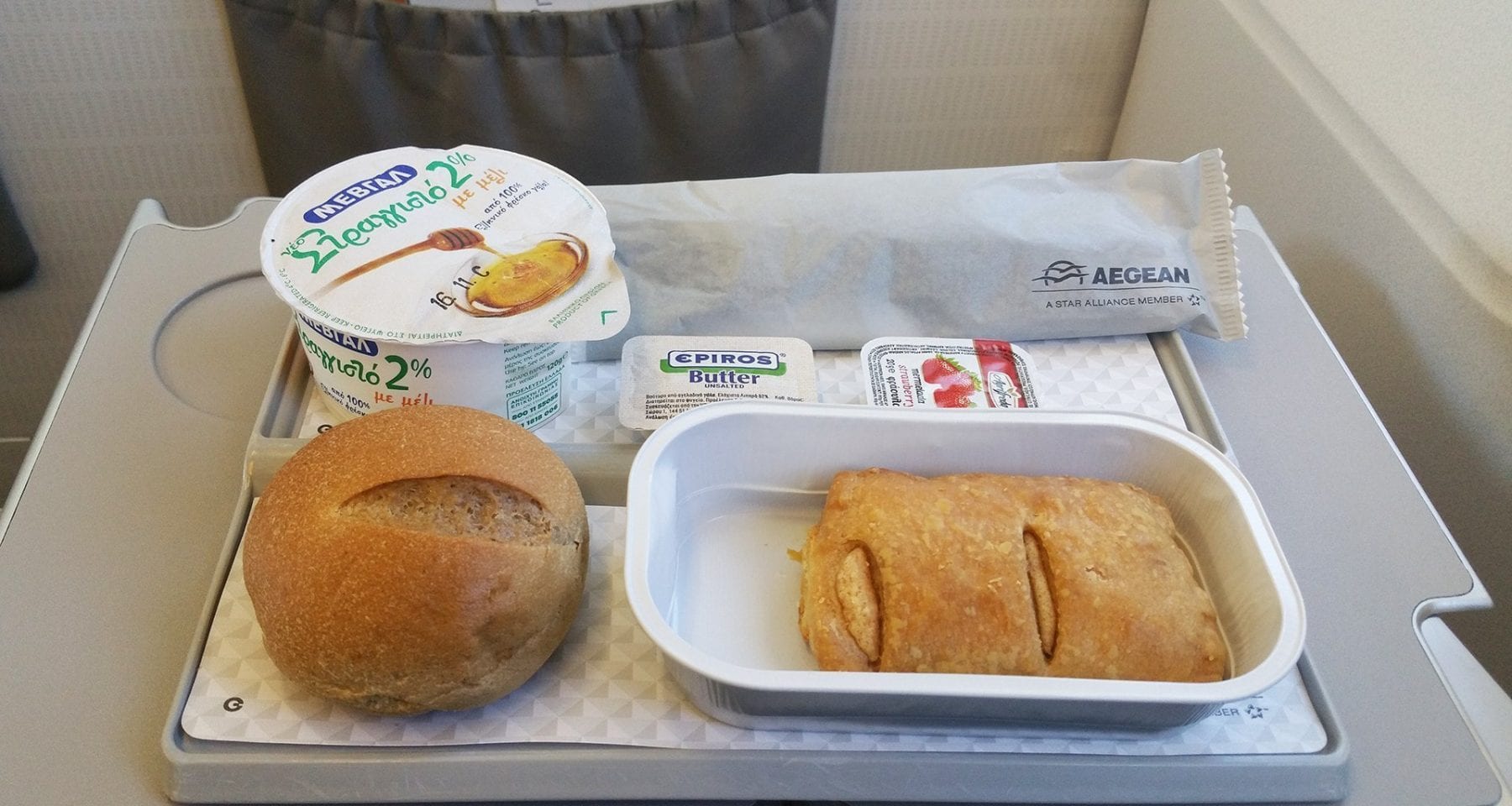 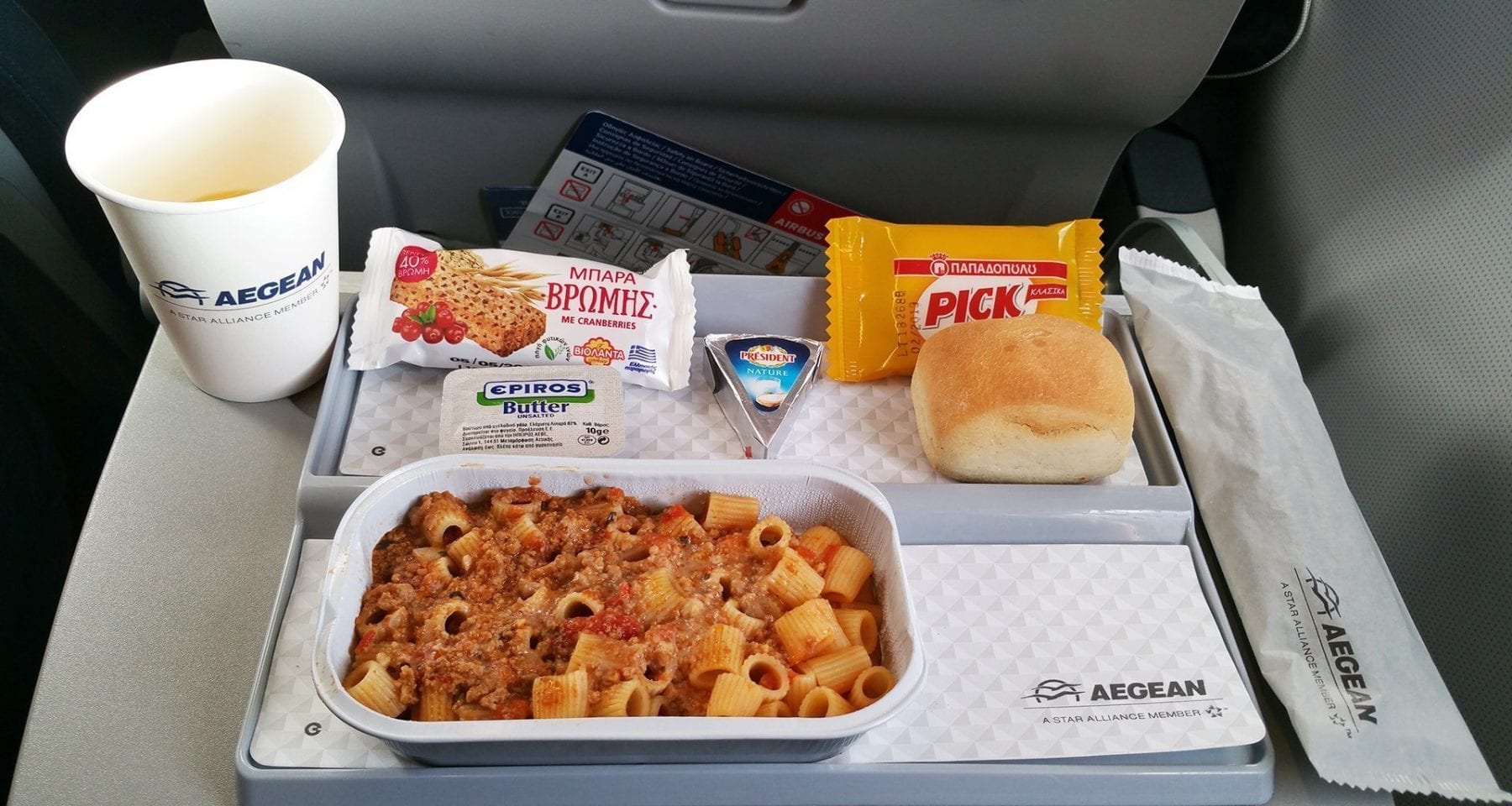 I’ve flown Aegean business many times, and the food is just fantastic. Here are some of my favourite meals I’ve enjoyed on Aegean over the last 12 months. The airline is now working with three esteemed chefs from Greece until the end of 2018, and those chefs are Lefteris Lazarou, Stelios Parliaros and Konstantinos Lazarakis. 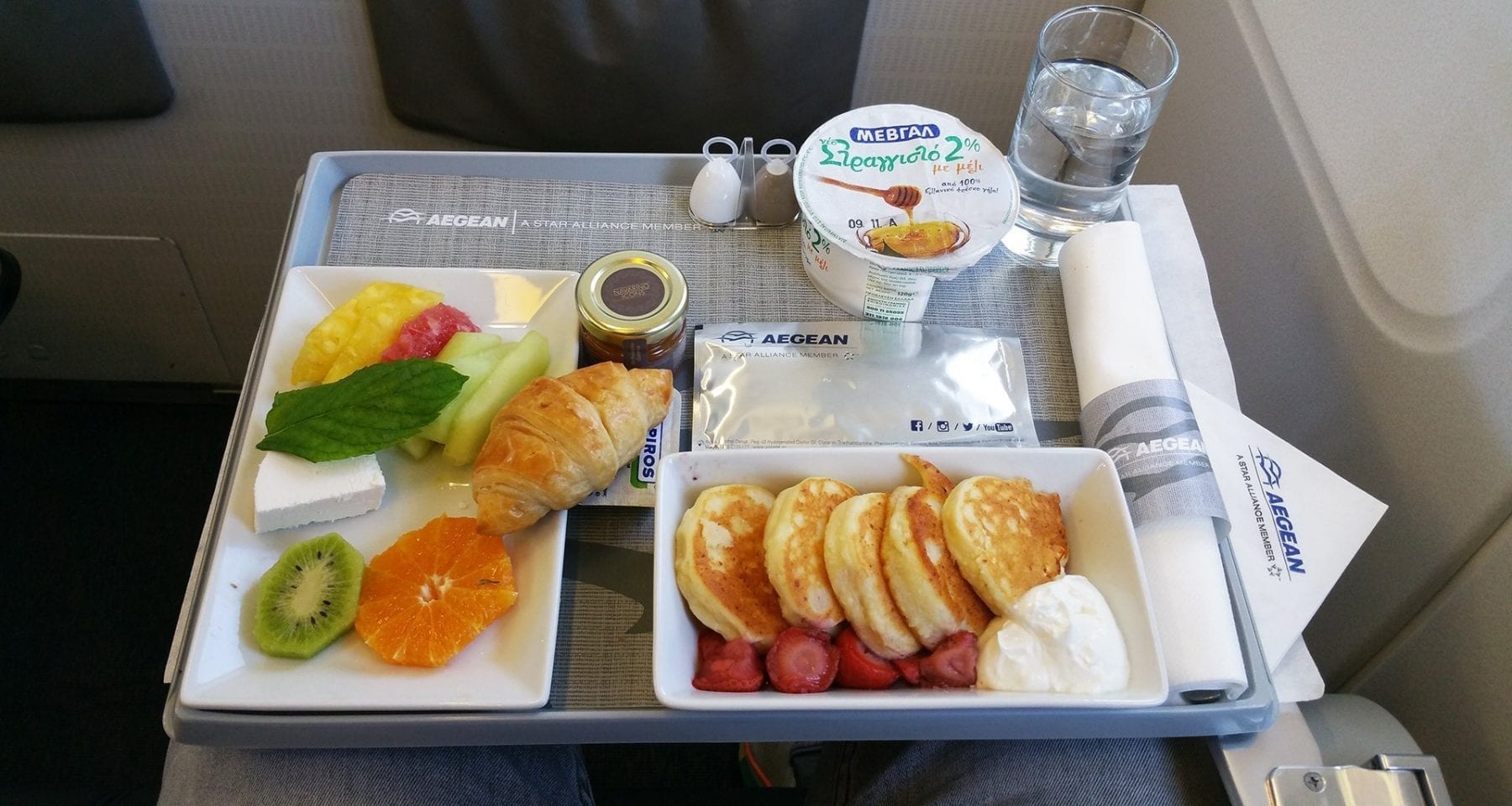 Athens to Madrid October 2018, what a breakfast!

So this fluffy little pancake ensemble was probably the best business class breakfast I’ve had in a while. Before take off I had taken a picture of the menu and put together a story on Instagram, I then asked people to vote on what I should have for breakfast on this flight. The pancakes won the public vote. The pancakes were so fluffy, and the combination of the Anthotyro Greek cheese with the caramelised strawberries made the meal pop.

Pretty much the same menu as Stuttgart to Athens in July of 2018 (coming up!) so I chose a different main meal this time. For my lunch main, I selected the beef with tomato sauce and gnoccheti. The great thing about this meal is that it was served very hot, the pasta was not dry at all, and the beef was very tender. A great lunch, couldn’t fault it. 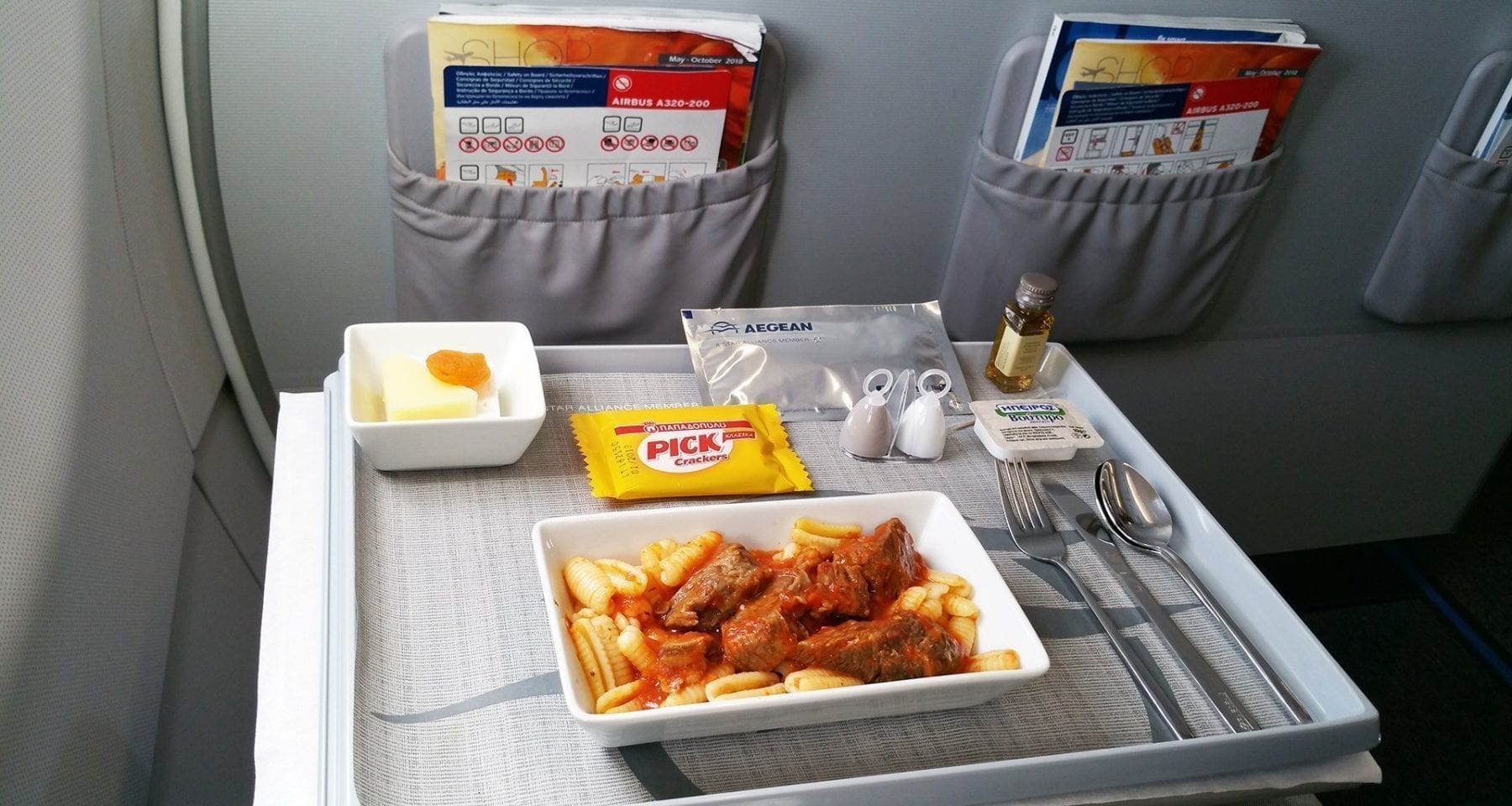 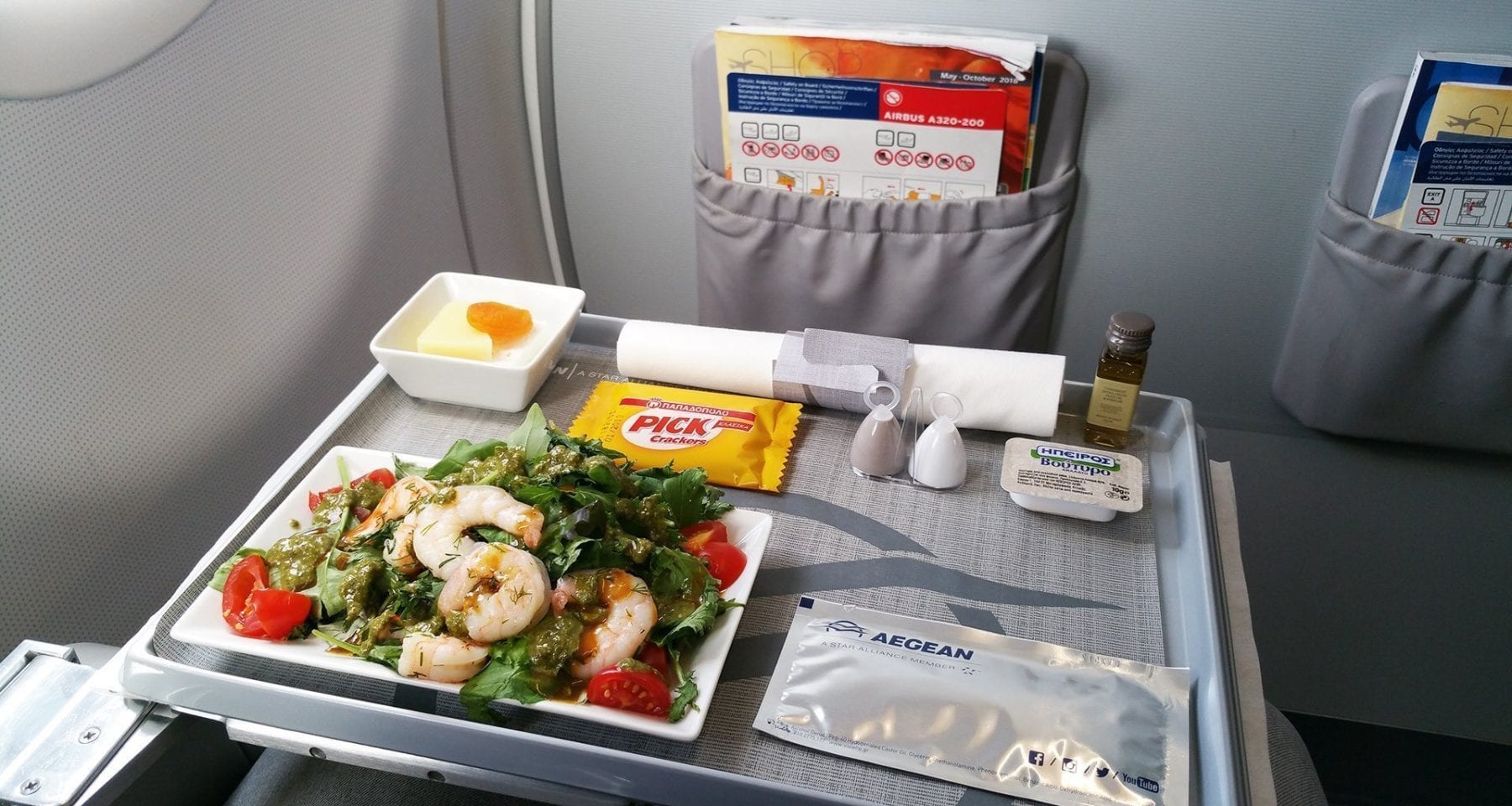 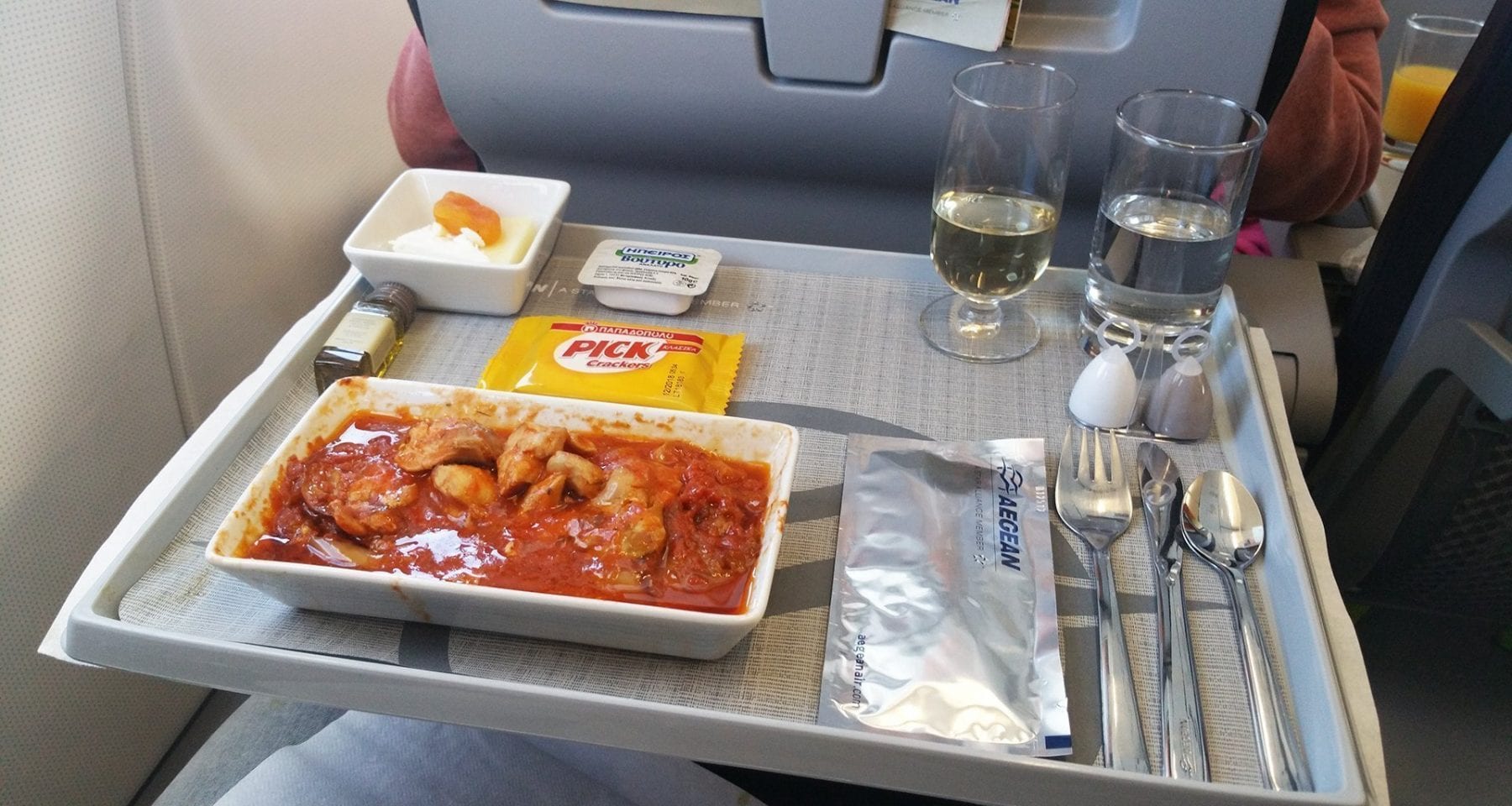 Over the summer I flew Aegean quite a lot, and I ended up having the above salad item twice. It was a Shrimp salad for a starter and ”Summer Style” chicken with eggplants from Santorini for the main course. For dessert Galaktompoureko! While the main dish doesn’t present well, it did taste great and wasn’t too heavy. The shrimp salad was excellent, and I felt that they did not skimp on the shrimps at all. As always dessert on Aegean is still on point.

New printed menus have been designed as part of the Gastronomics concept in business class, and they look like this. The only thing that I have noticed as a significant change is the dessert service; previously you received an assortment of desserts, now it’s just the one choice. First world problems I know…. 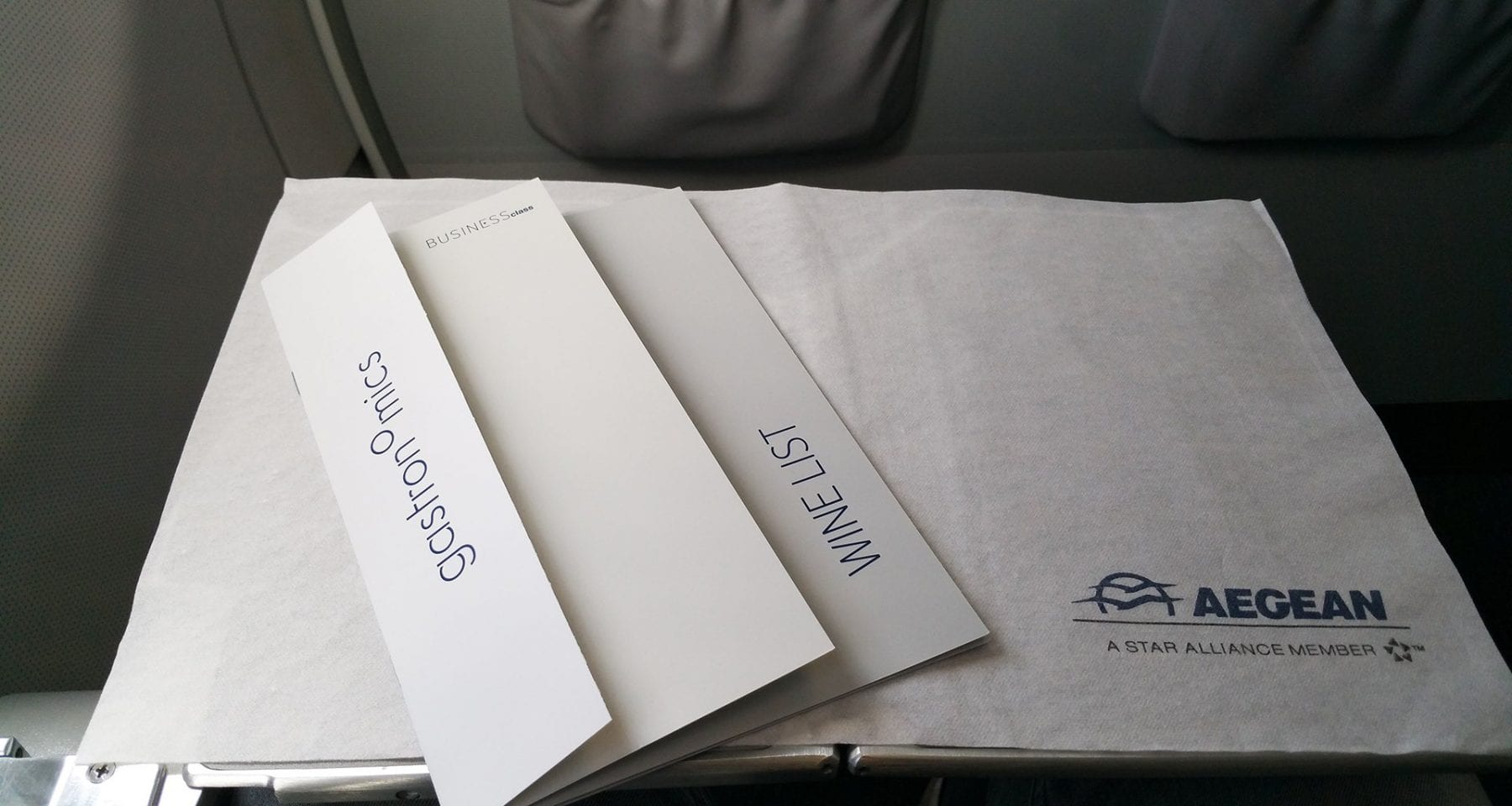 The following photos are before the launch of Gastronomics in May 2018. 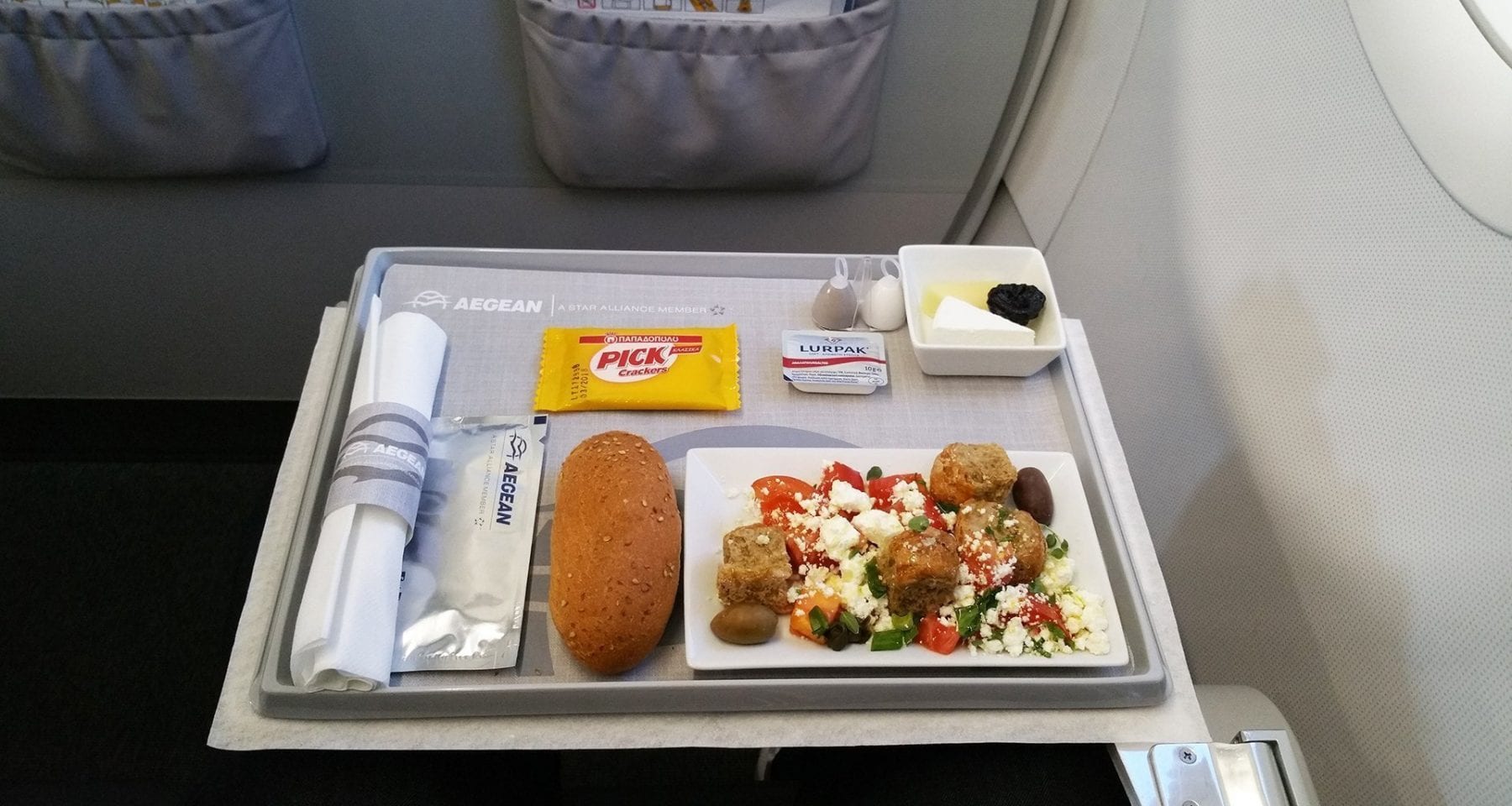 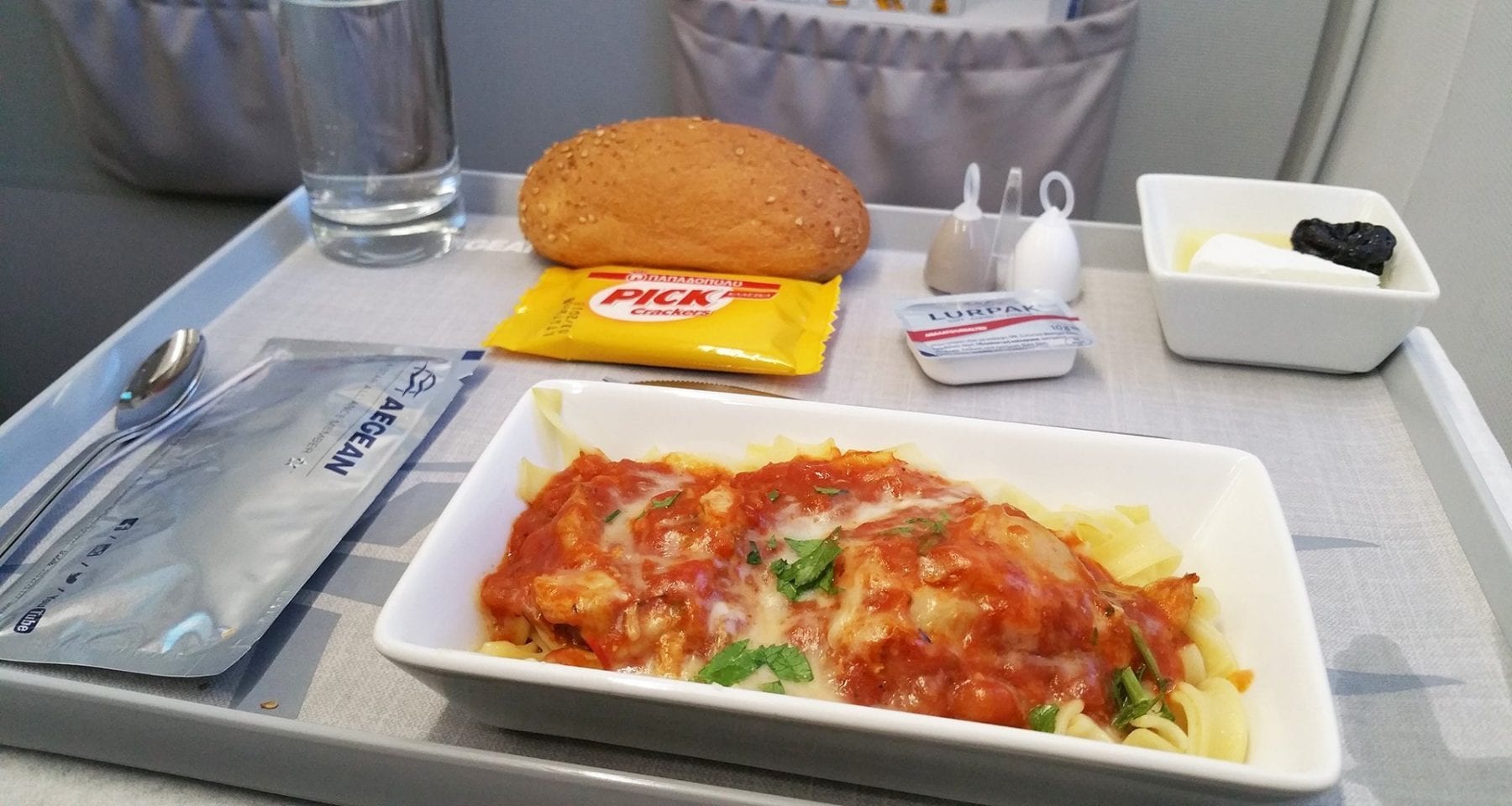 Chicken with pasta and tomato sauce.

The above Instagram post is pretty self-explanatory, I loved the plating of the entree. It was perfect.

Onto another flight this time Brussels to Athens in October 2017,  look at the colours in this entree!

It was such a great meal, the veal wasn’t dry at all, perfectly cooked and not tough to chew. I was surprised at how juicy the meat was. 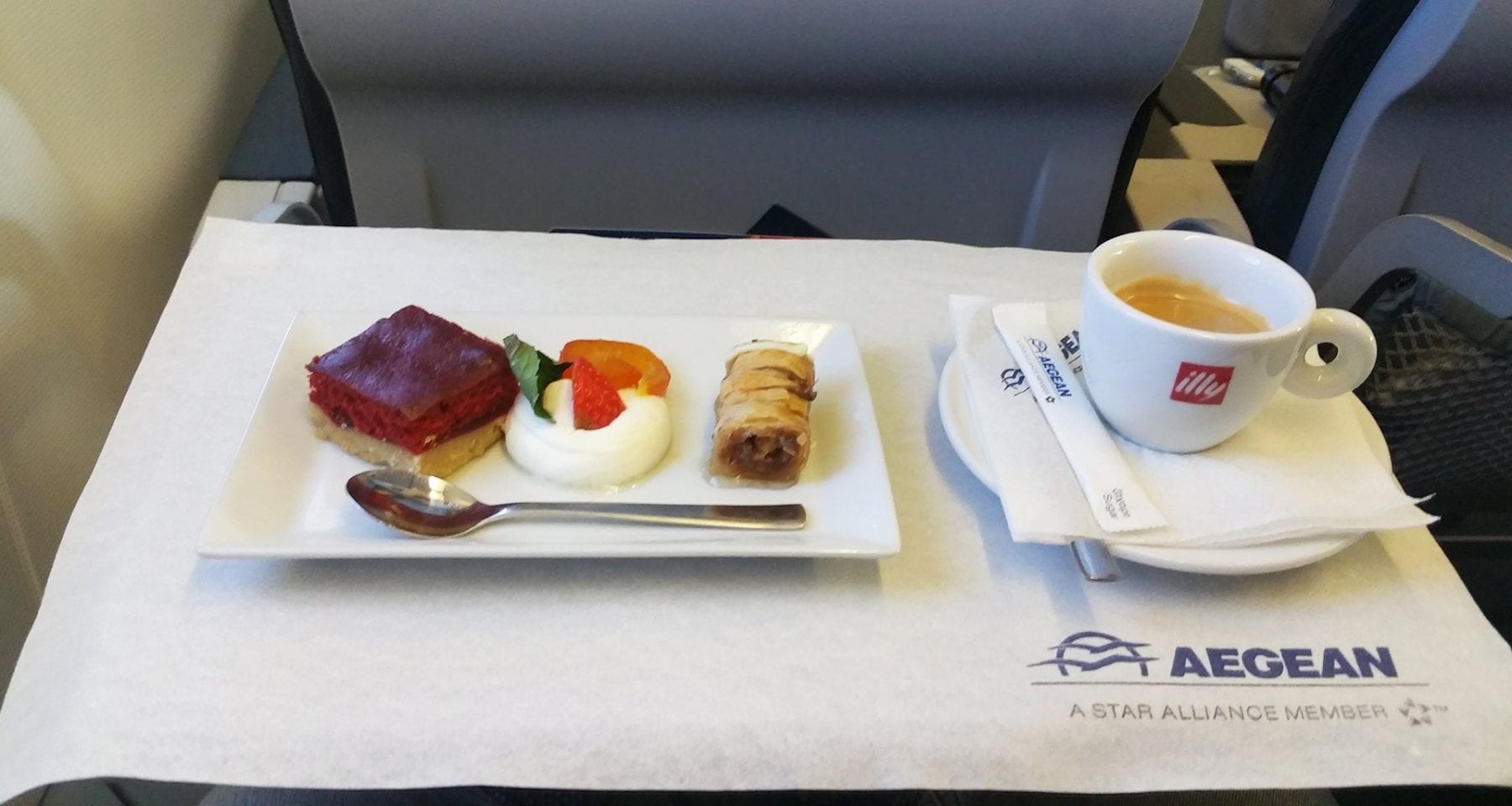 A quick hop from Thessaloniki to Dusseldorf in September 2017, and I received this Asparagus omelette with veal sausage, fresh fruit and yoghurt. Another fantastic business class meal tray on Aegean. 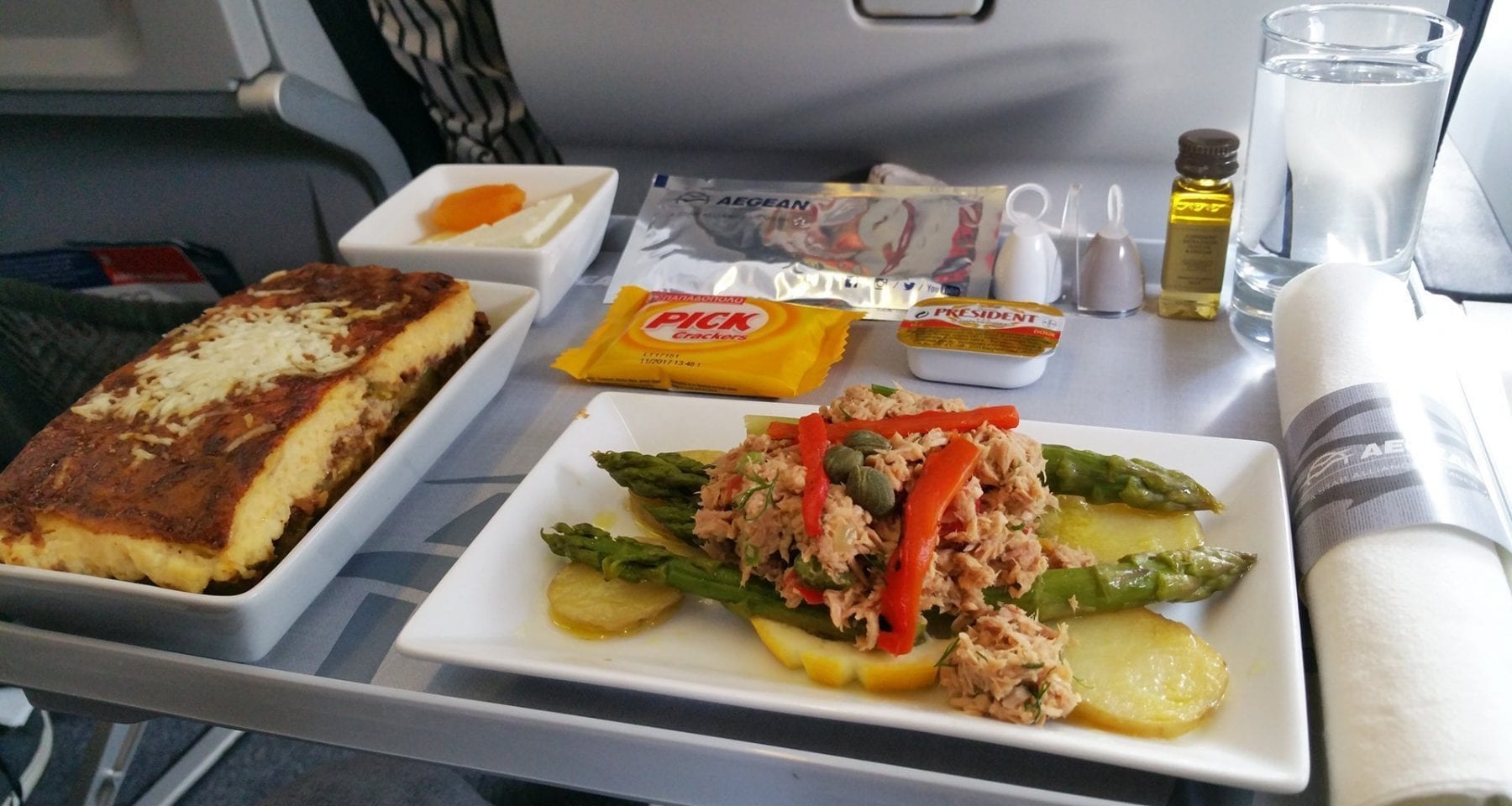 Look at that Moussaka! Paris to Athens June 2017

Is that not the biggest piece of Moussaka you have ever seen? Plus a delicious entree salad of Tuna fish with asparagus and potato.

In December 2017 Aegean re-opened their lounge in Athens after renovations, the space is modern, provides more seating and they enhanced the food and drink offerings considerably. There is still no proper hot food options, but this doesn’t bother me as I feel their onboard meals make up for this. It’s great to see Aegean providing some new options like fresh salad, freshly pressed juices and much more. Here are some photos of the Schengen lounge.

Aegean also opened up a non-Schengen lounge in the A gates section of Athens airport. I visited this lounge a few times over the summer in July/August, and in the early mornings, it was quiet! There’s a fantastic Nespresso machine, the food options are pretty much the same, and there’s lots of seating too. 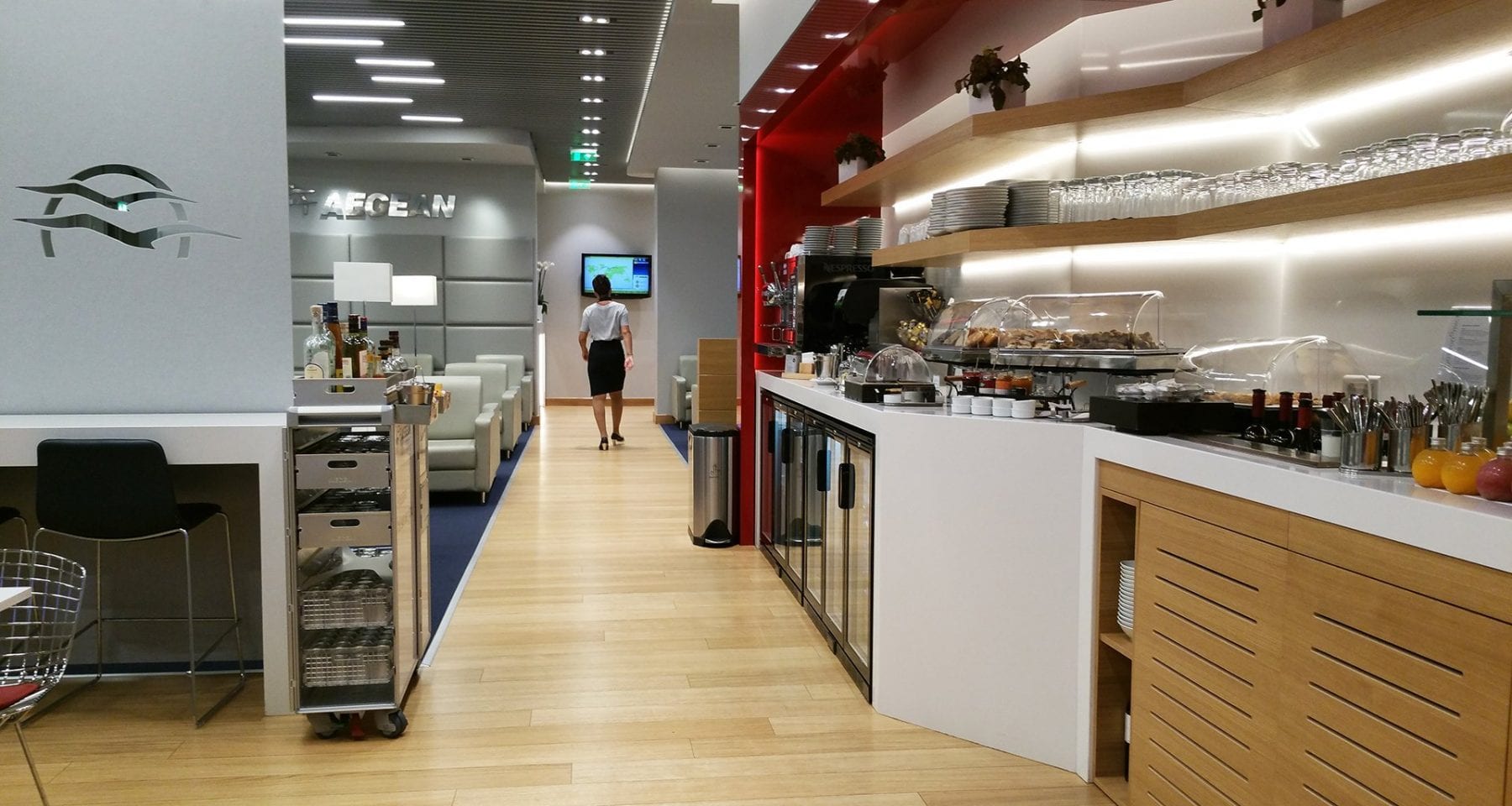 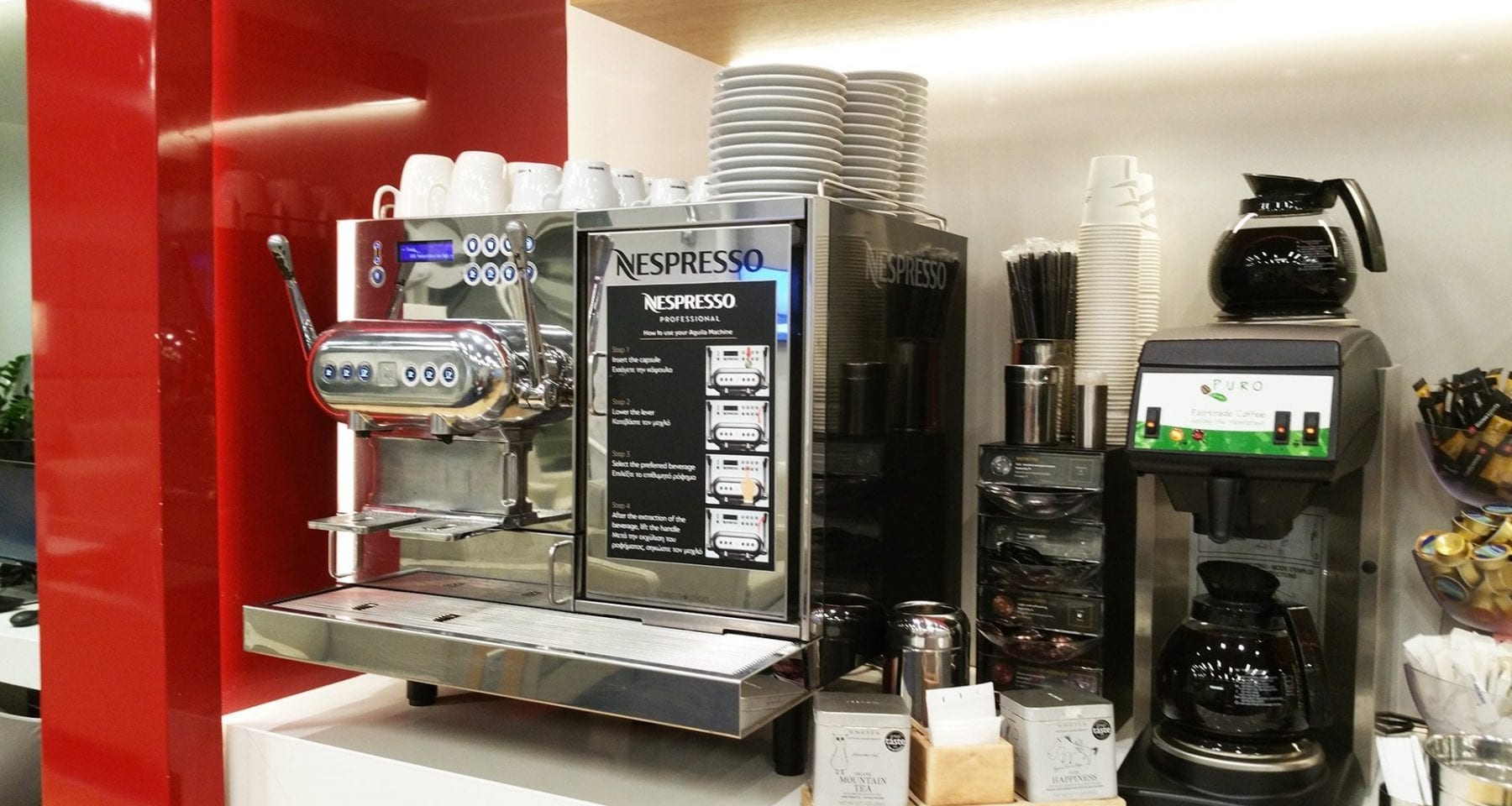 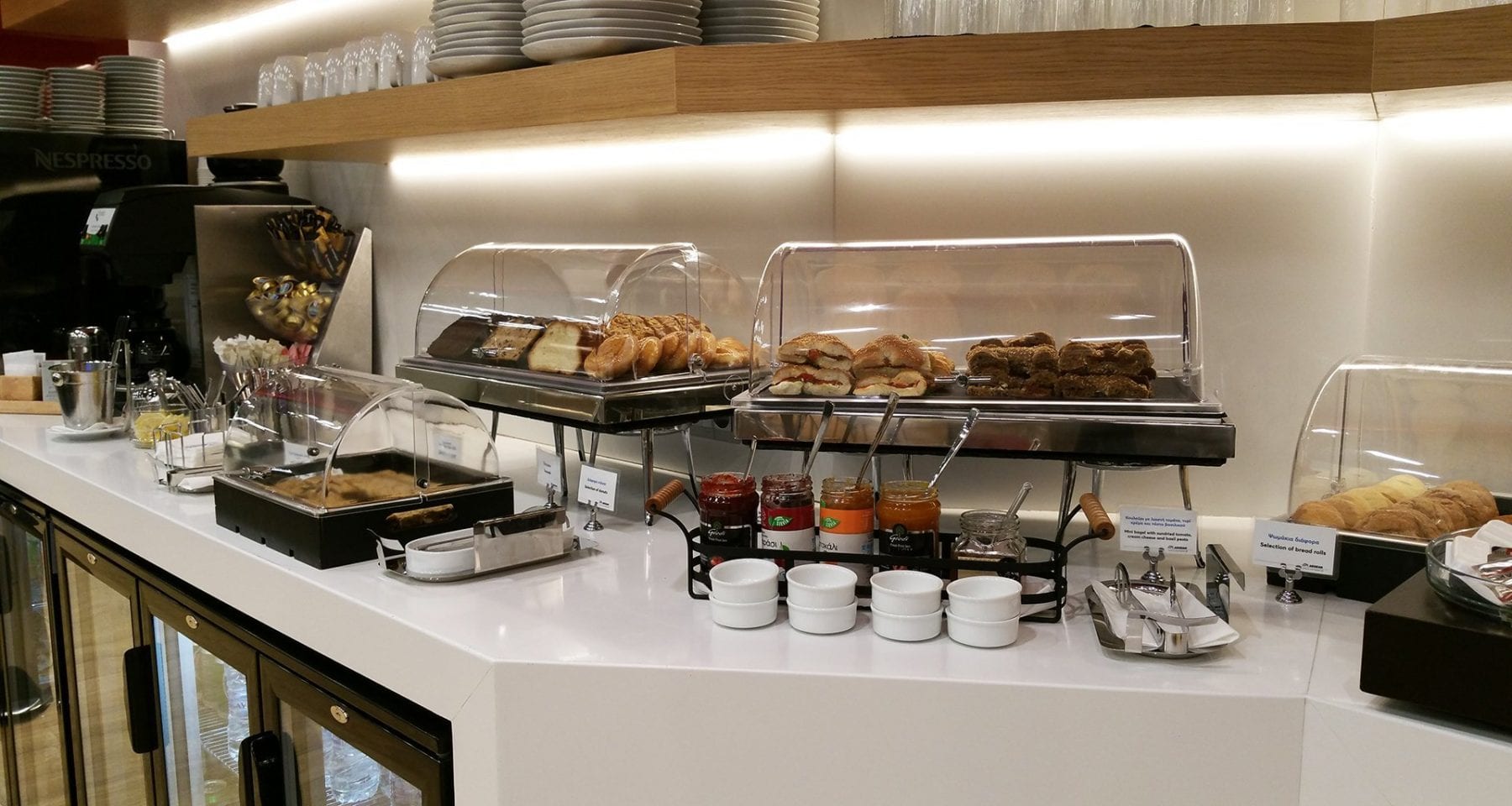 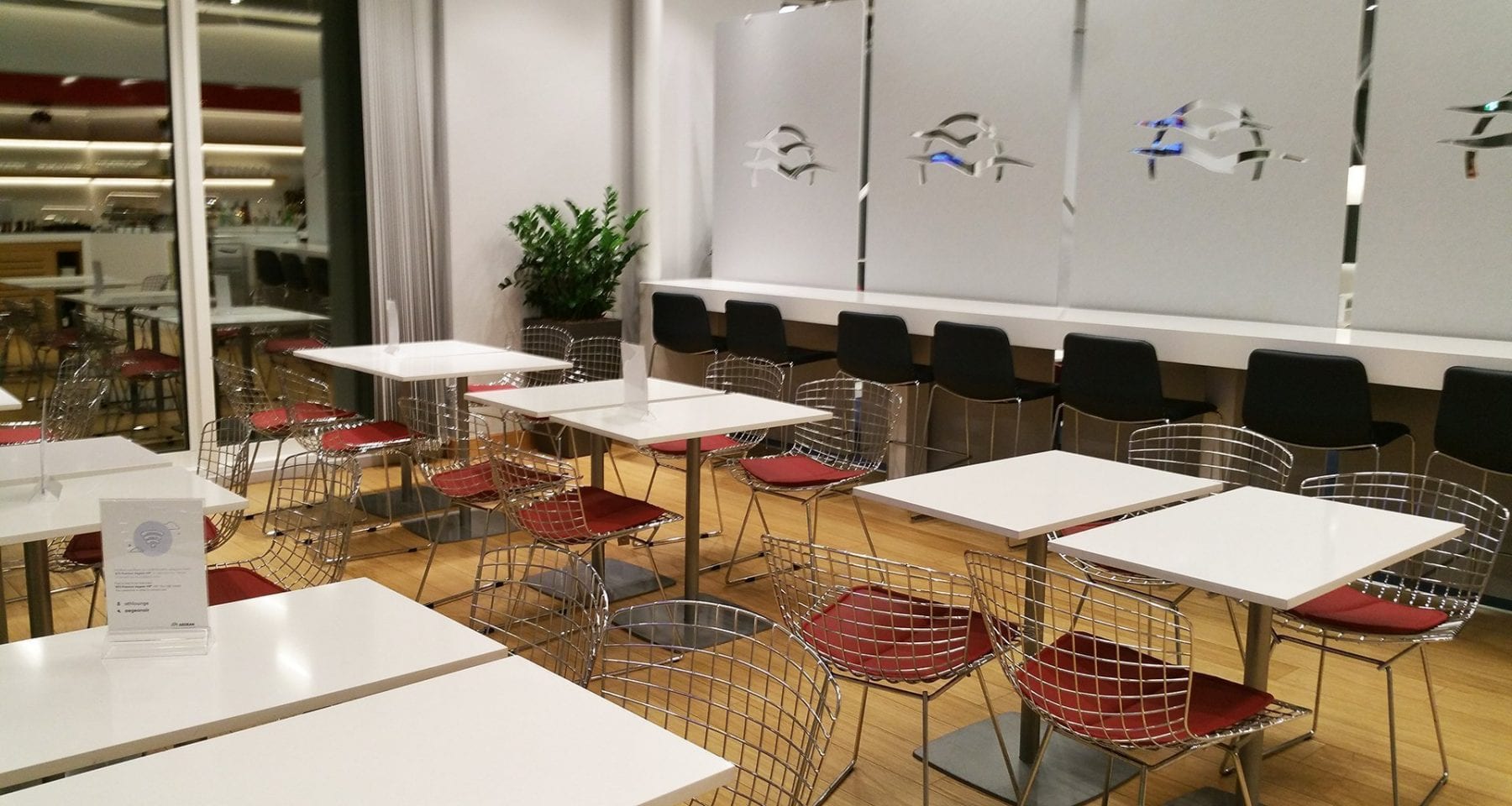 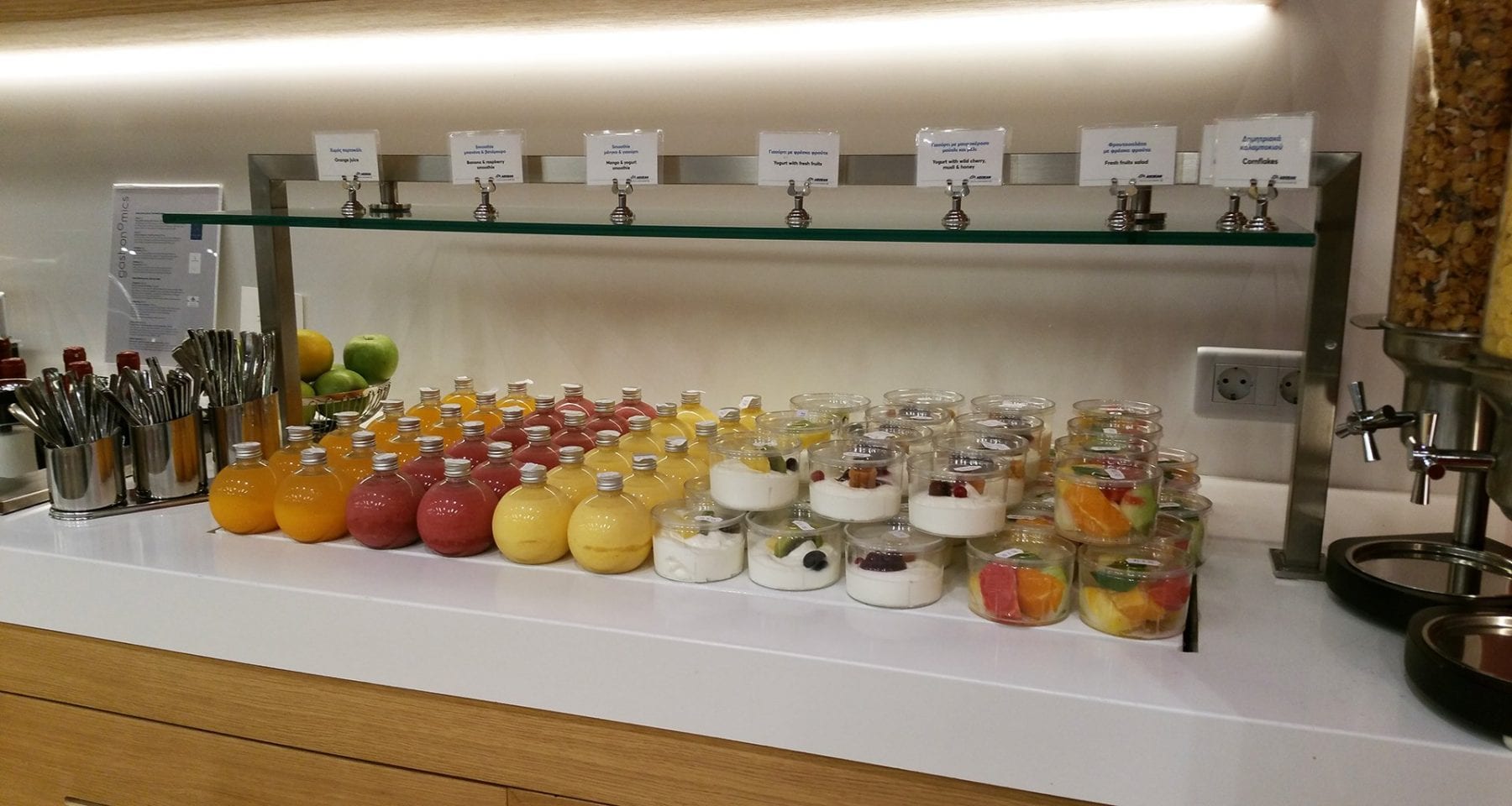 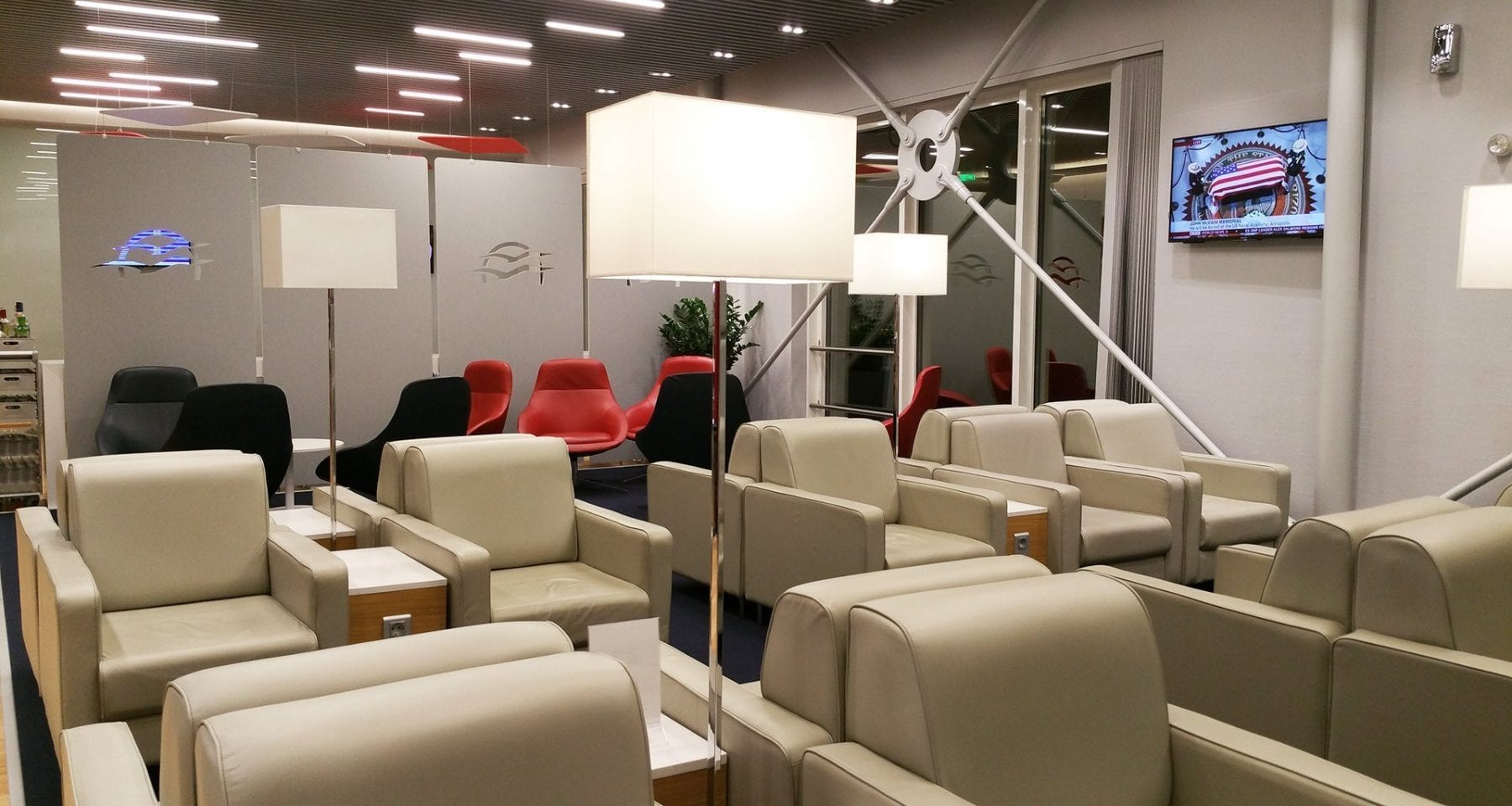 I’ve said it before, and I’ll repeat it. Aegean are fantastic ambassadors for Greece. I love how they highlight Greek products throughout your travel experience where possible. It’s a lovely welcome home for those who are Greek and coming back to their homeland, and a fantastic way for visitors to Greece to experience Greek hospitality before they touch down in Greece.

I hope you get to fly Aegean soon.