Aegean recently celebrated their 20th anniversary with a brand new look that accompanied the delivery of the A320neo to their fleet. There was a large ceremony in Athens to launch the new brand and aircraft which will replace their current A320 fleet over the coming years.

On a recent trip from Zurich to Athens, the stars aligned and I was lucky enough to travel on one of the new aircraft in business class.

Some of the new features in the aircraft include these handy tablet/phone holders as well as USB charging ports in all seats. 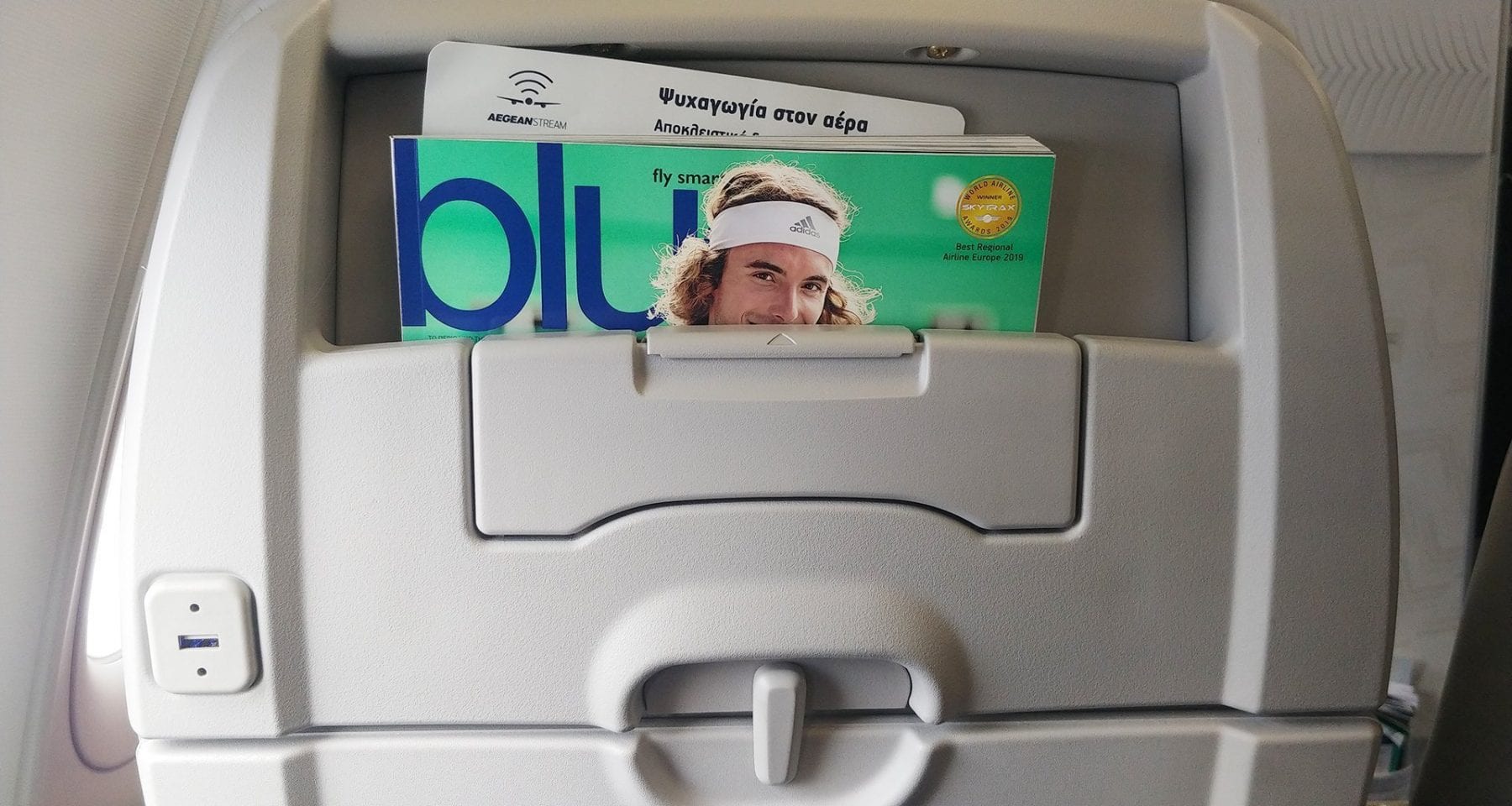 In business class there are newly designed decent-sized pillows too. 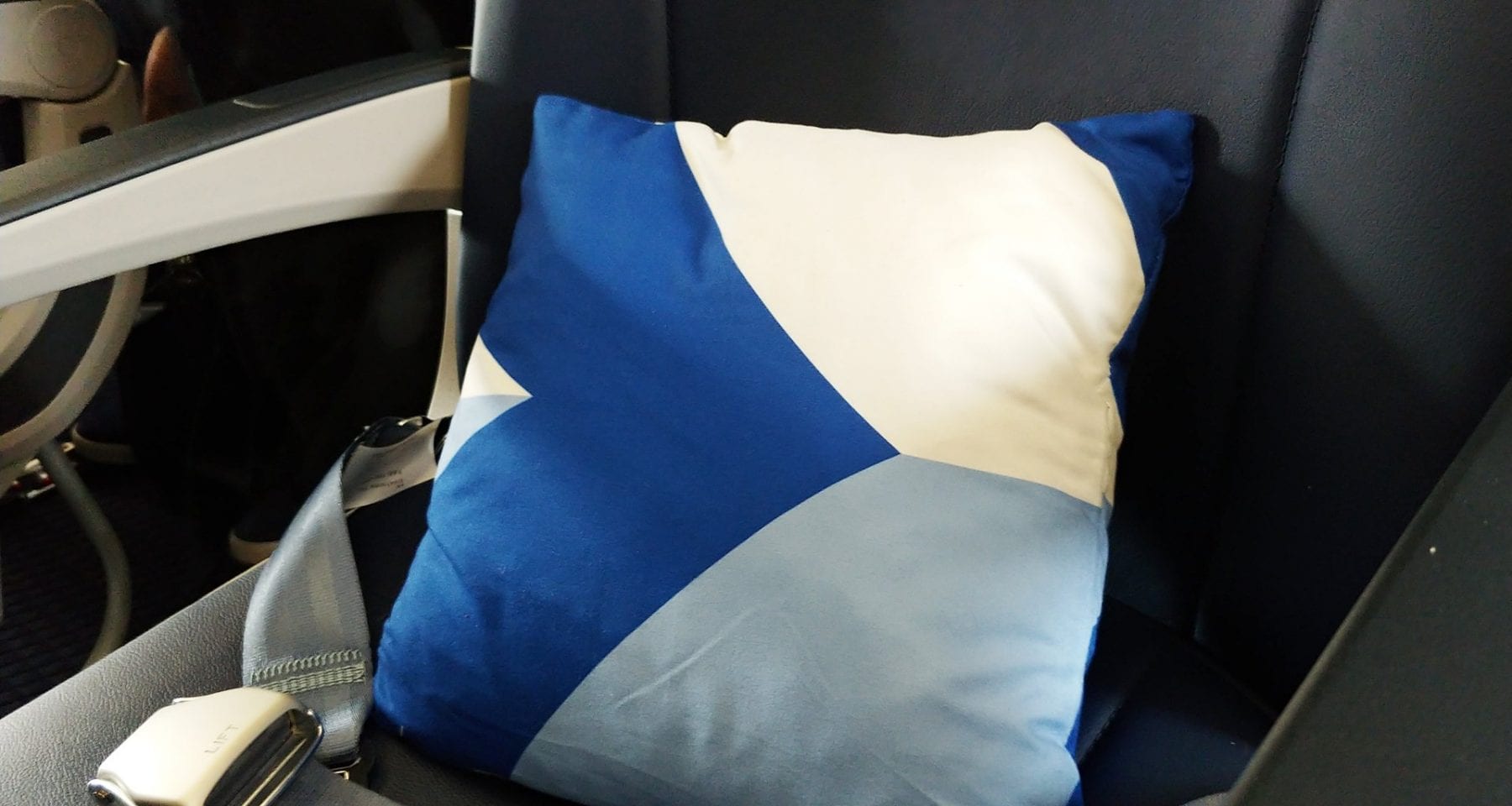 As usual, the cabin crew (on the ground) offered inflight menus and a choice of water, juice or Greek sparkling wine. I opted for a glass of water.

About 10 minutes after takeoff the inflight service commenced, a few minutes later, my placemat was given to me, followed by a hot towel service.

Aegean offers their ‘Gastronomics’ program where several Greek chefs have worked together with the airline to create the inflight menus. Currently, the airline is working with Christofos Peskias, Stelios Parliaros and Lefteris Lazarou. Their wine consultant is Konstatinos Lazarakis, what a great job he must have!

If you’re in Athens, I highly recommend a visit to Stelios’ dessert shop called Sweet Alchemy which is located in Kolonaki. I visited recently and was thoroughly impressed with the dessert I purchased.

The printed menus are well designed and take you on a Greek food journey, and give you some background on the inflight meal program. There are at least two red and two white wine options which are always from Greece.

The menu on this flight was as follows: 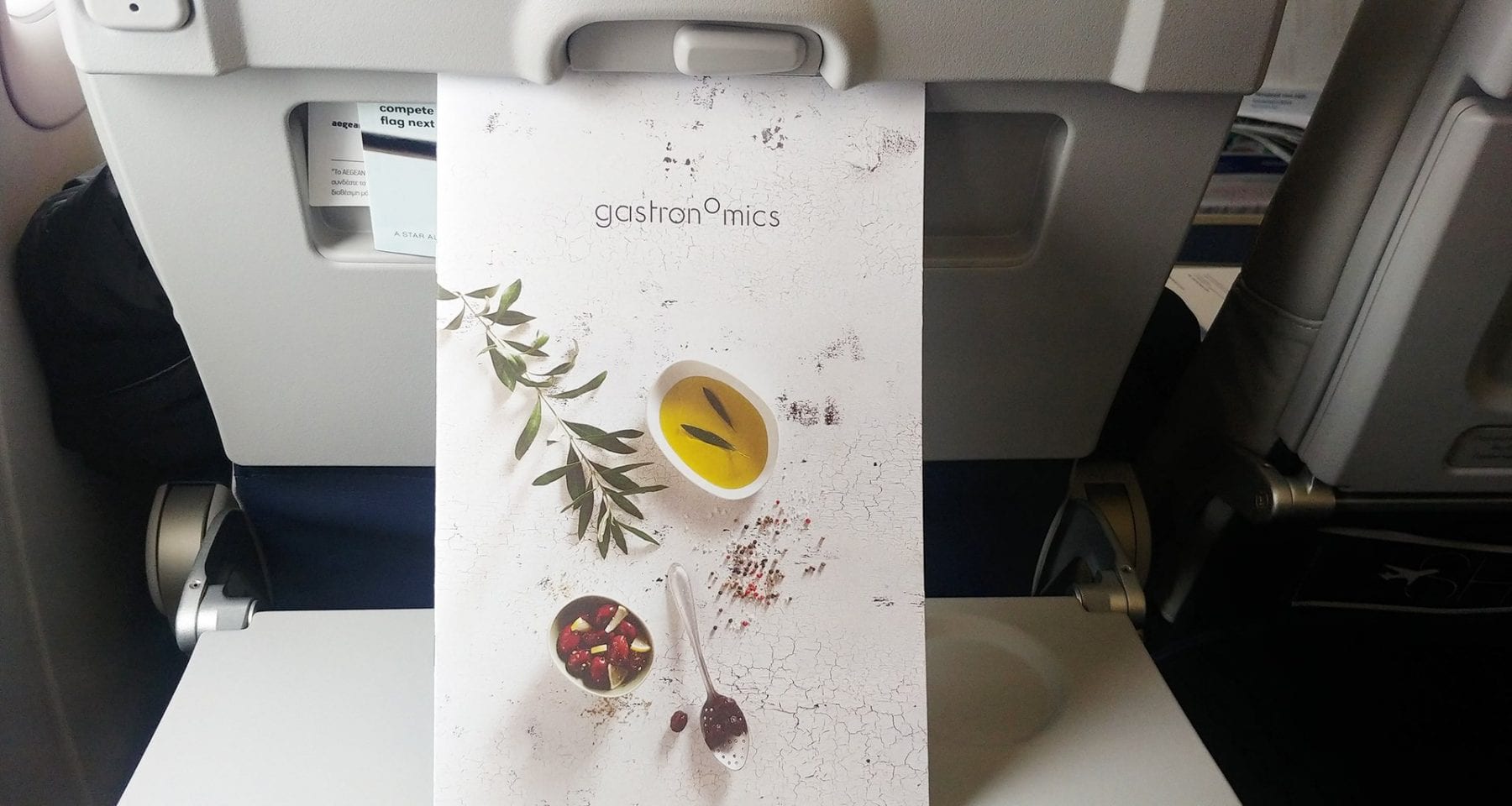 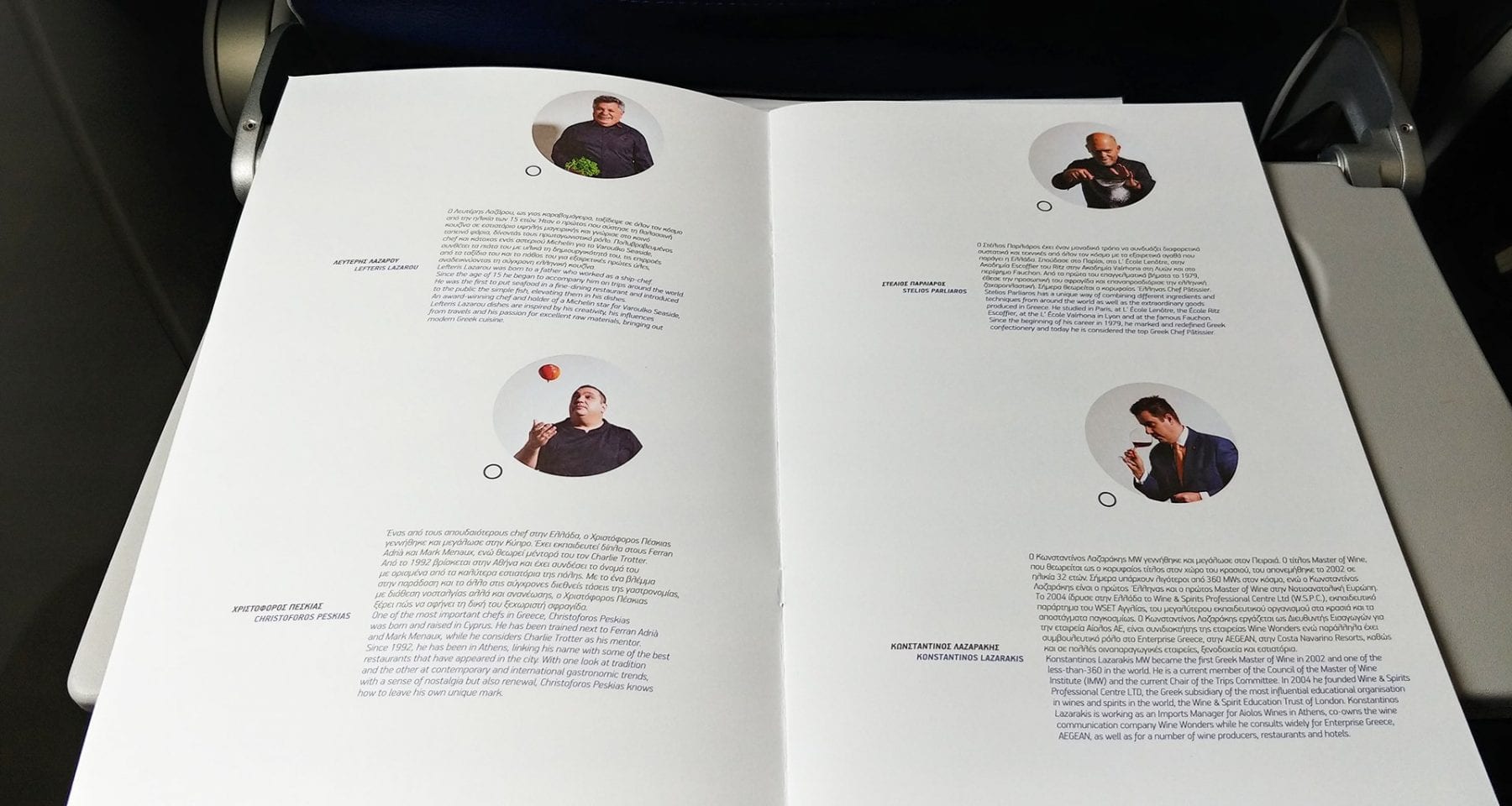 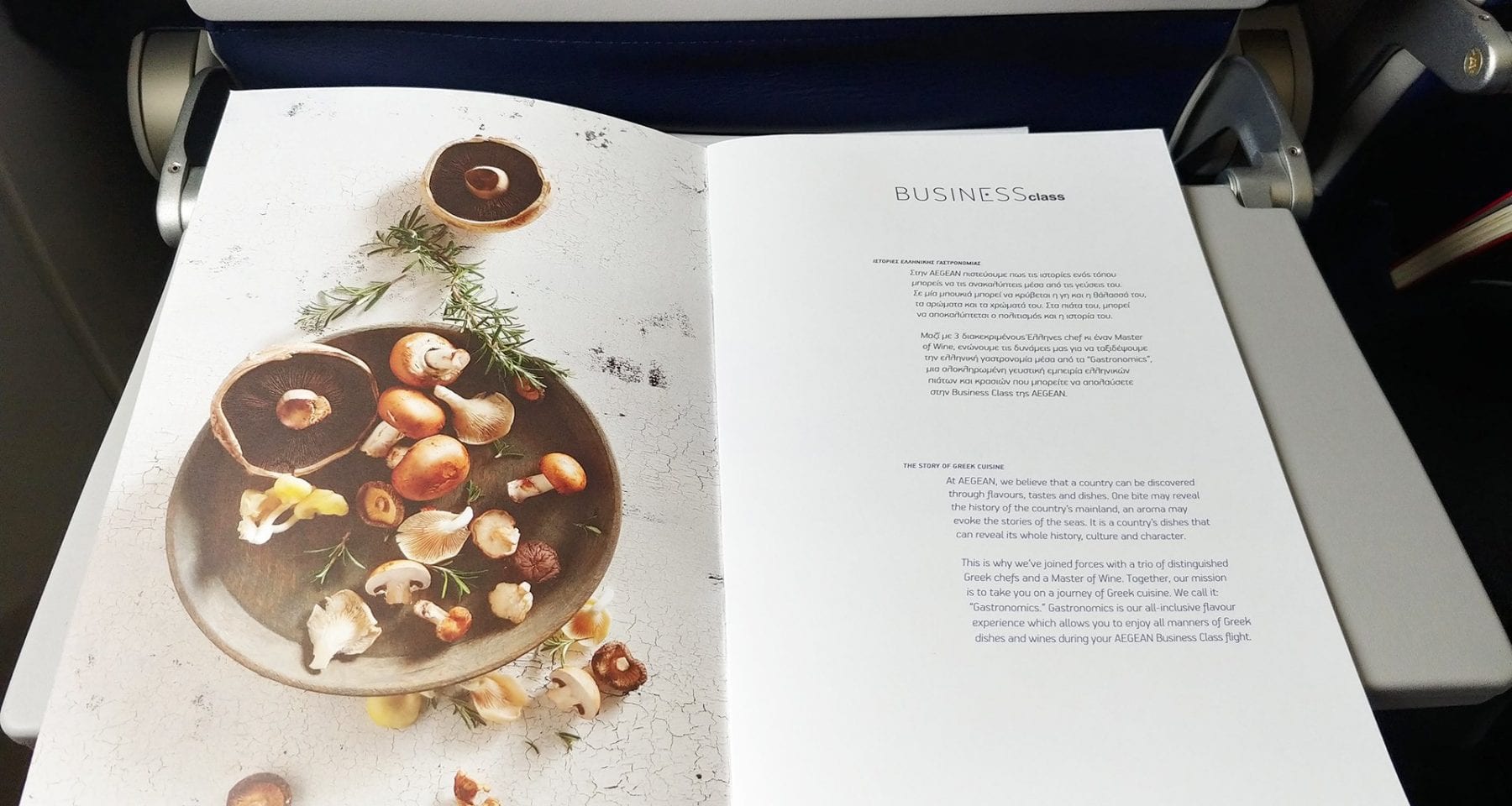 There is no choice of entree or dessert. However, there are two main meal choices offered. You can also pre-select your meal if you’re flying in business class up to 24 hours before departure right here.

The cabin had nine passengers booked, and only five of us decided to dine inflight.

My entree was delivered promptly, and I drenched my salad in the lovely Greek Olive oil that’s provided on your meal tray. The salad was fresh and tasty. 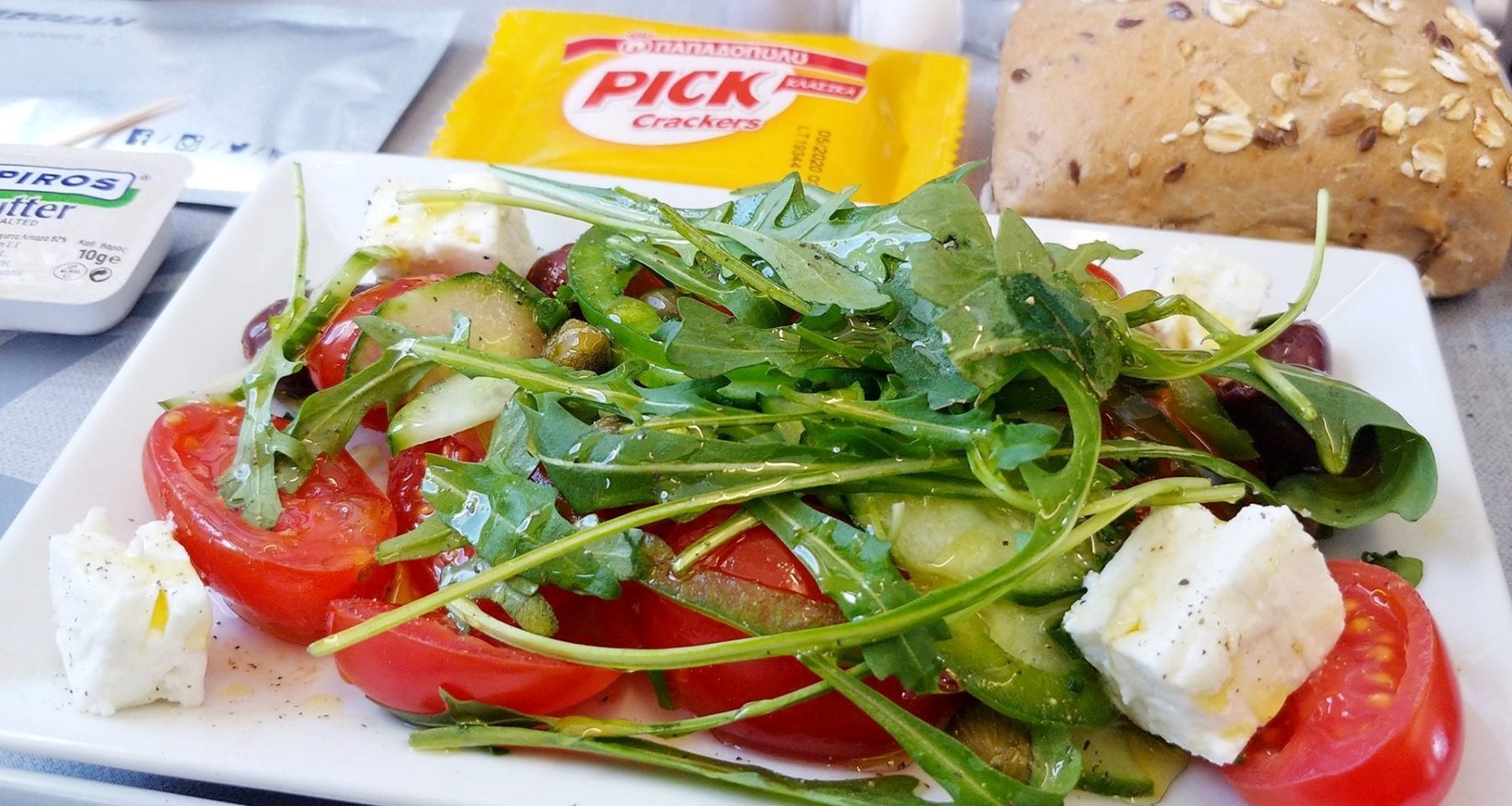 Not long after finishing my entree, the plate was collected, and I was offered my main meal choices. I was undecided and asked the crew member if I could take a look at both options. A few minutes later, she showed me both options.

I opted for the chicken, and it was great, just the right quantity and tasty. I’m a big fan of Quinoa, so it’s nice to see this ingredient used in inflight dishes.

Once I finished my main meal, the crew member took my tray away, leaving only the placemat in place. Dessert consisted of a cream of tahini tart, which was absolutely delicious, I love Tahini, but I’ve never tasted something delectable. 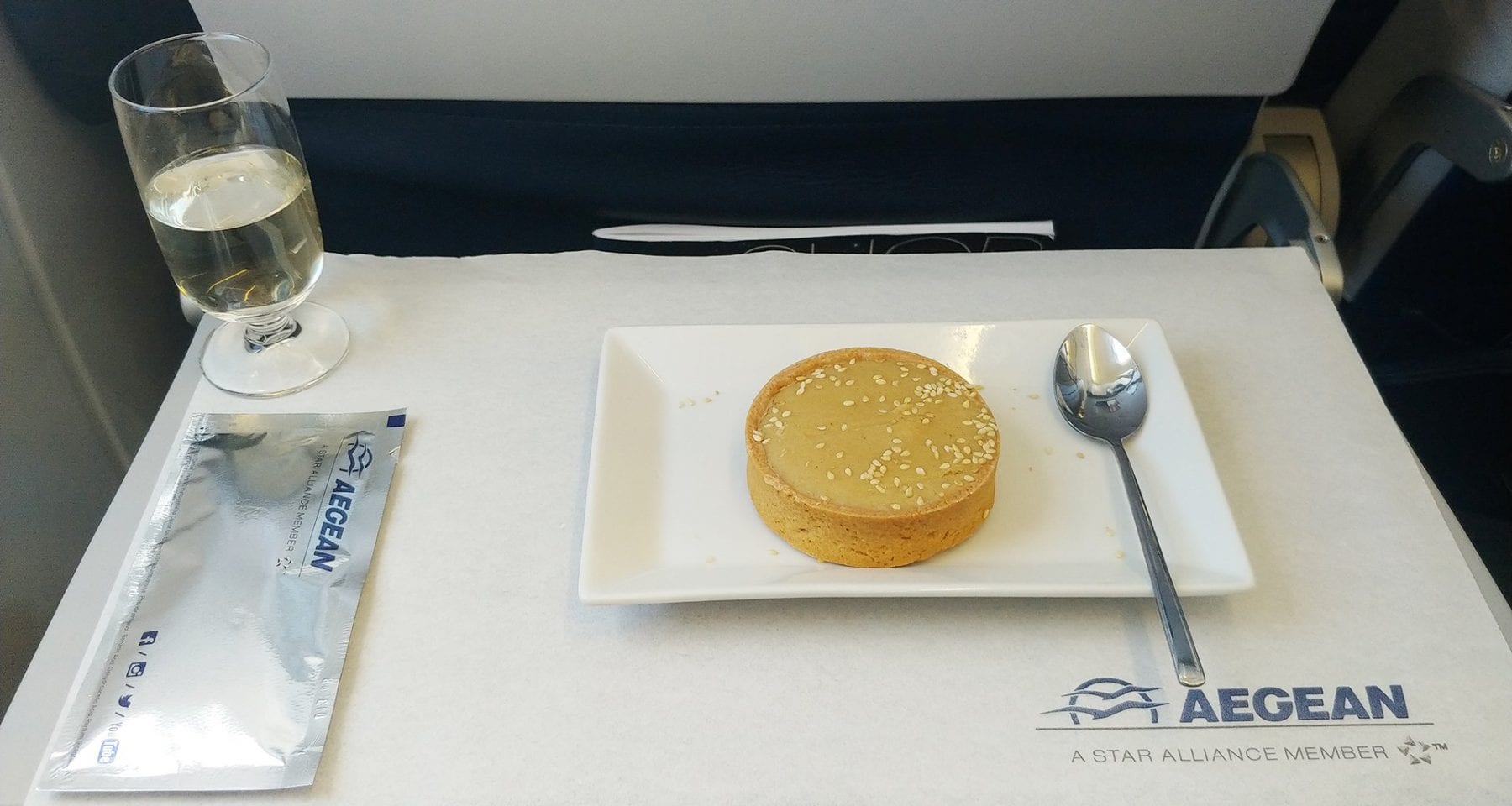 It had the consistency of a creme patisserie, and it was light, fluffy and simply delicious. The crust of the dessert wasn’t too sweet and complimented the Tahini ever so nicely. The crew took about 55 minutes to complete the inflight service and hey remained present in the cabin throughout the flight.

I really can’t fault Aegean. They are one of my favourite airlines in Europe to travel with, and the service is always exceptional, whichever cabin you fly in.

Let’s take a look at some of their economy class meals that I’ve sampled in 2019, plus some lounge food options too.

Economy class meals are still plentiful and free in Aegean economy class. On shorter flights like the ones I took, expect a small snack box of a hot snack/meal plus a few snacks depending on the time of day.

On a trip in June 2019 from Athens to Cairo, my flight took off at midnight, so I visited the Aegean non-Schengen lounge before my flight. The lounge was pretty empty, and the food offerings were more than adequate. The flight from Athens to Cairo was only 1.5 hours, there was no choice of meal, and I received my hot meal about 20 minutes after takeoff. Included in the snack box was a small hot meal of chicken with rice, as well as some breadsticks and a digestive bar. More than enough food for a flight taking off just before midnight.

On my return to Athens, I flew from Amman. However, this time the departure time was at 4 am. Flying time was just over two hours, and as I boarded the aircraft, I wondered what they would serve at this hour. Who wants to eat a full meal at 4 am, anyway?

After take off the cabin crew served a similar snack box; however, the offering was a lot smaller than the previous flight. No complaints here, I thought the quantity offered was perfect for the timing of departure. A small warm cheese pie was provided as well as a sesame bar, quite a typical simple Greek breakfast.

A few years ago, the airline upgraded its lounges and food offerings. There are fresher food options available, fresh juices, and typically Greek sweet and savoury items. To check out some of the lounge food offerings in Athens view the gallery below. 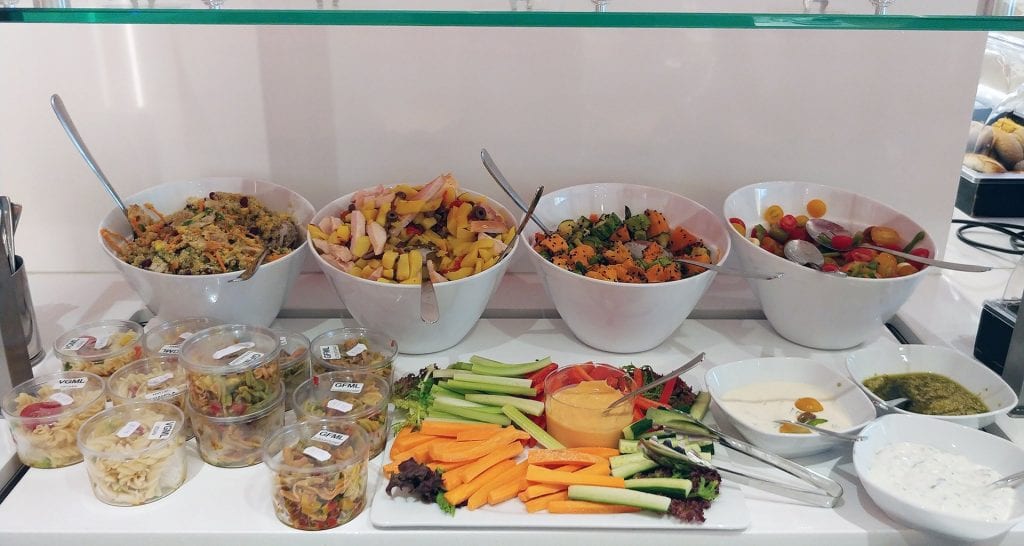 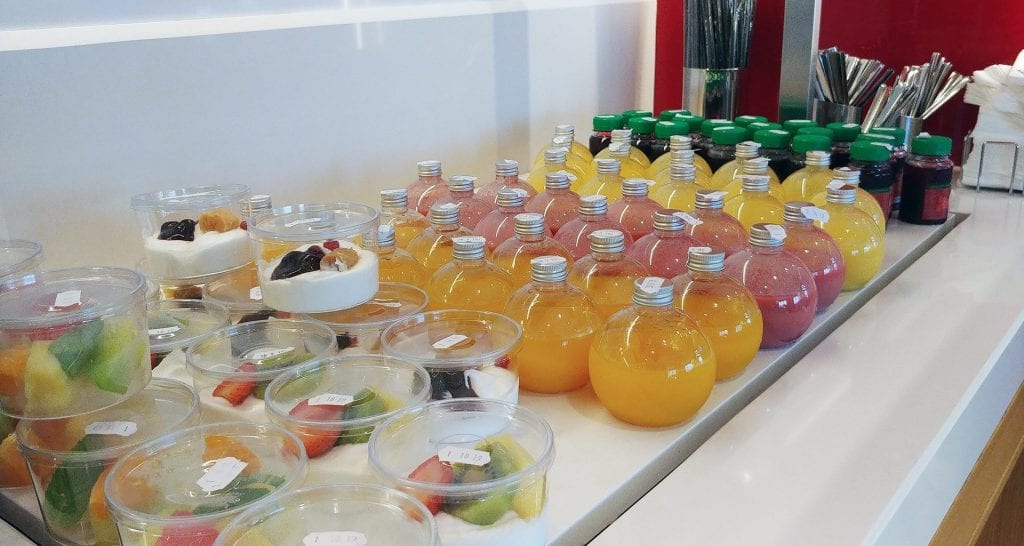