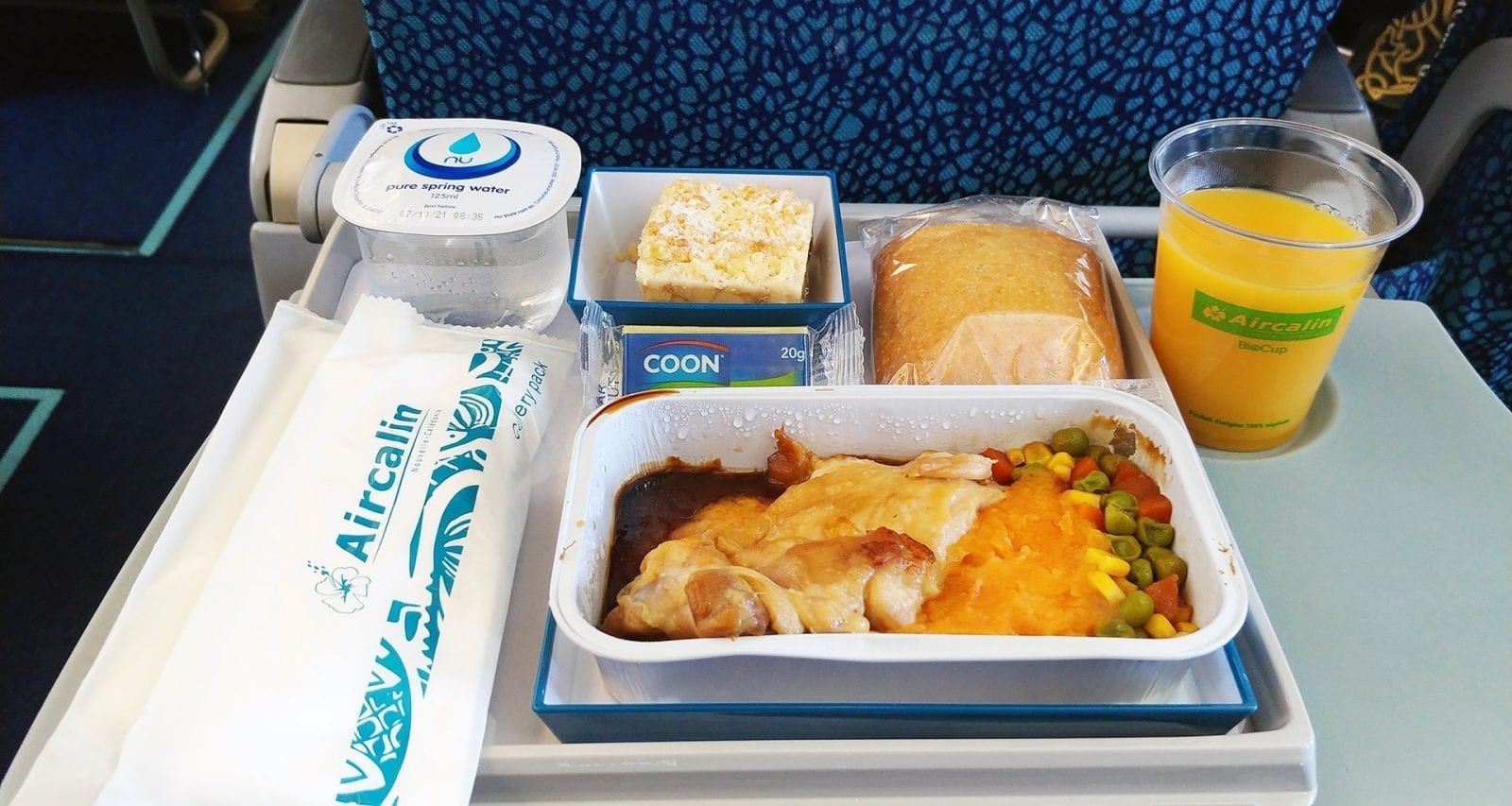 Having spent the summer of 2019/2020 in Melbourne, I decided to get away for a few days and head to New Caledonia. Air Calin operate their A330-900neo on the Sydney to Noumea route a few days a week, so I booked a ticket via Sydney to experience the new aircraft. However, a last-minute aircraft change meant that I would be travelling on their A320 instead.

The airline offers a range of pre-order upgrade meals which launched recently, however as hard as I tried I could not book this meal, as I had booked a Qantas codeshare flight.

The A320 offers proper business class seats, and I managed to take a picture as I was boarding. The cabin feels relaxing, as though you’re already on holiday and the pillows offered are probably one of the best inflight pillows I’ve experienced in economy class. They’re ergonomic and hug your body in ways that regular economy class pillows don’t.

On the ground, before takeoff, the cabin crew offered French newspapers, as I’m not a Francophone I declined their offer.

Ten minutes after takeoff kids packs were distributed, and within 30 minutes, the inflight service commenced.

The cabin crew worked from the front of the cabin and rear, meeting in the middle. One crew member worked alone in the forward section of economy class, while two crew members worked the cart at the back. An additional crew member worked in the galley and assisted the crew as required.

1hr and 5 mins after takeoff I received my meal, I observed the service, and it seemed slow and disjointed for some reason. There was no interaction with me about the meal; instead, the crew member just placed the meal tray down without even looking. Later she asked if I wanted anything to drink. There was a slight language barrier, and it was difficult for her to understand me and vice versa.

The meal was a chicken thigh with sweet potato and vegetables. It was quite good, though I enjoyed the vegetables and sweet potato more than the chicken. The meal also included some pre-packaged cheese, an apple cake and a bread roll.

I wanted to know what the delicious brown sauce was in the meal and asked the crew member during collection. She just replied with ”We don’t get details like that”, I was slightly amused at how she handled the question, perhaps she could have handled it better.

During the collection stage coffee, tea, water, and Beehive Whiskey were on offer.

I can’t say it was a stellar customer experience inflight, and a choice of meals would have been welcomed. I expected French wines and products to feature heavily in their inflight service, but sadly this was lacking. I have since found out that on flights ex Noumea the product offering and meals are slightly better than those flights coming from outstations.

Eva Air: One of the best business class experiences?