In December I was in New Caledonia for a quick break and needed to get to Brisbane, I chose to fly with Air Vanuatu from Noumea to Port Vila. I had a quick break in Port Vila and then continued onto Brisbane.

The island hop from Noumea would take about 1.15mins on the airlines’ ATR72 aircraft nearly as long as the security line took at Noumea’s La Tontouta International Airport that morning. The small airport doesn’t cope with 3 or 4 flights departing close to each other, resulting in some of the longest lines I’ve ever experienced (55 mins to be exact).

I made it to my gate with only a few minutes to spare before boarding time, and we walked out to the aircraft which was parked close to the terminal.

The crew from Air Vanuatu couldn’t have been friendlier, a stark contrast to the experience I had with the Air Calin crew to Noumea.

About 25 minutes after takeoff the service began, I knew not to expect hot meals as it was such a short flight, and this aircraft type doesn’t have ovens.

The two crew members operated one cart each, one filled with drinks and the other with food. A tasty wrap was offered, which featured plenty of ham and salad, and a choice of beverages was available. It took the crew about 15 minutes to complete the service, and they collected rubbish by hand just before landing.

Once I got to Vanuatu, I visited the Air Vanuatu catering centre to get an overview of their business and economy class meal service on their larger aircraft. Most of their meals are imported from airline caterer Dnata in Australia, as they can not rely on local produce for the sheer volume that they require. Where possible the airline uses local fruit and vegetable products.

In business class passengers can expect to be treated to a full meal service consisting of an entree, and the main meal, plus the usual inflight bar offering. The airline has also partnered with various local brands such as Aelan chocolate and Tanna Coffee and local water brands.

Nauru Airlines operated my flight from Port Villa to Brisbane on a classic Boeing 737. Four crew operated the 2.40min flight to Brisbane.

Twenty-five minutes after takeoff the inflight service began, I was seated in the middle of the aircraft, and it took the crew about 15 minutes to reach me. I was offered a choice of either Peri Peri chicken or a Beef Pie. I opted for the chicken, which came with a pink lamington. I noticed that the meal trays were not set up in the cart. Instead, the crew member placed the hot meal on the tray along with the dessert and cutlery. 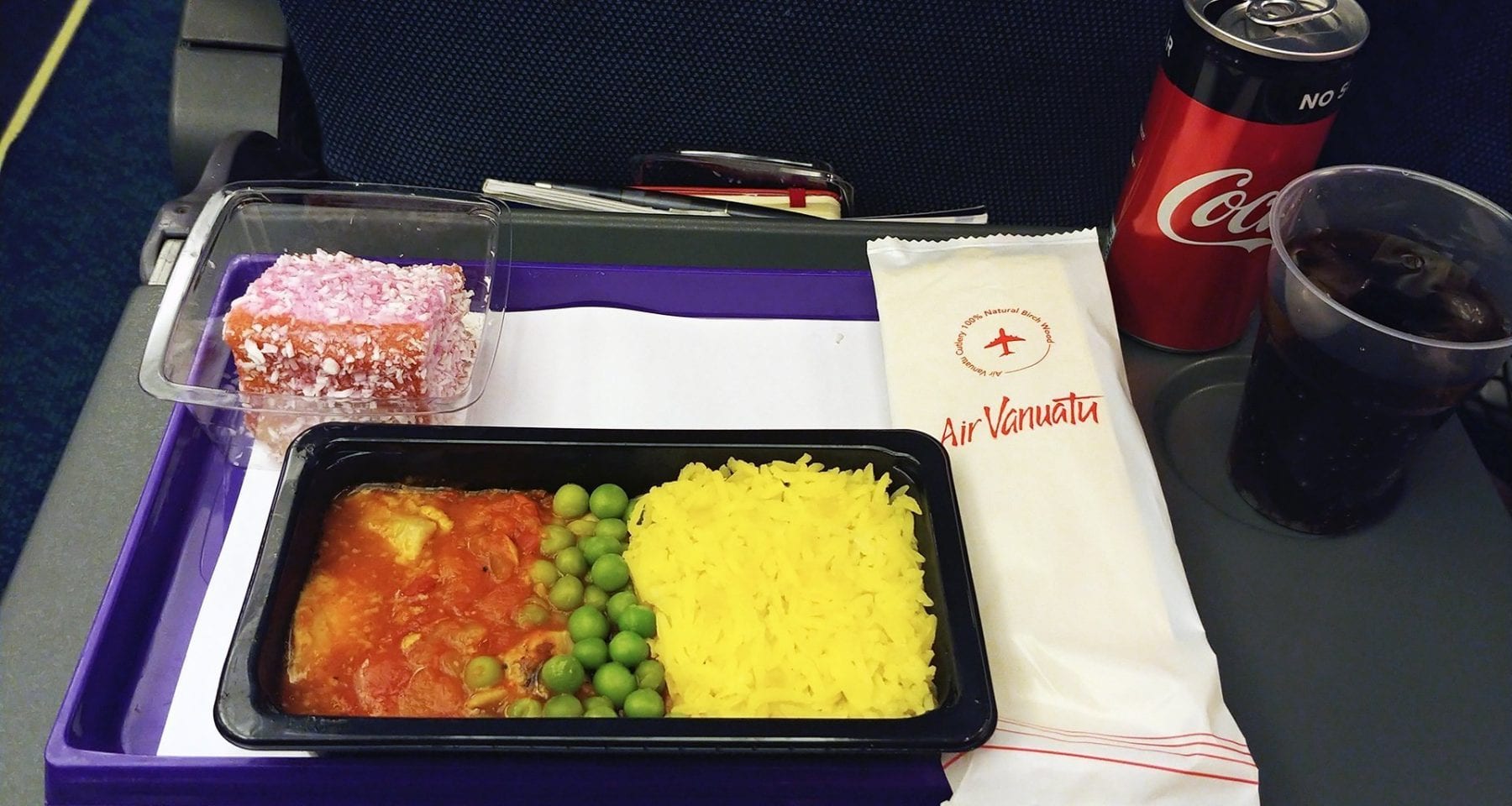 Once my food order was delivered, another crew member served me drinks from another cart. Meals were collected about 15 minutes later by hand, followed by one more beverage service.

The biggest surprise in economy class was the use of Birchwood cutlery, and it’s great to see an airline thinking about sustainability. It was strange using wooden cutlery, initially, it feels quite dry on the tongue, but after a few mouthfuls of food, you can’t notice it. 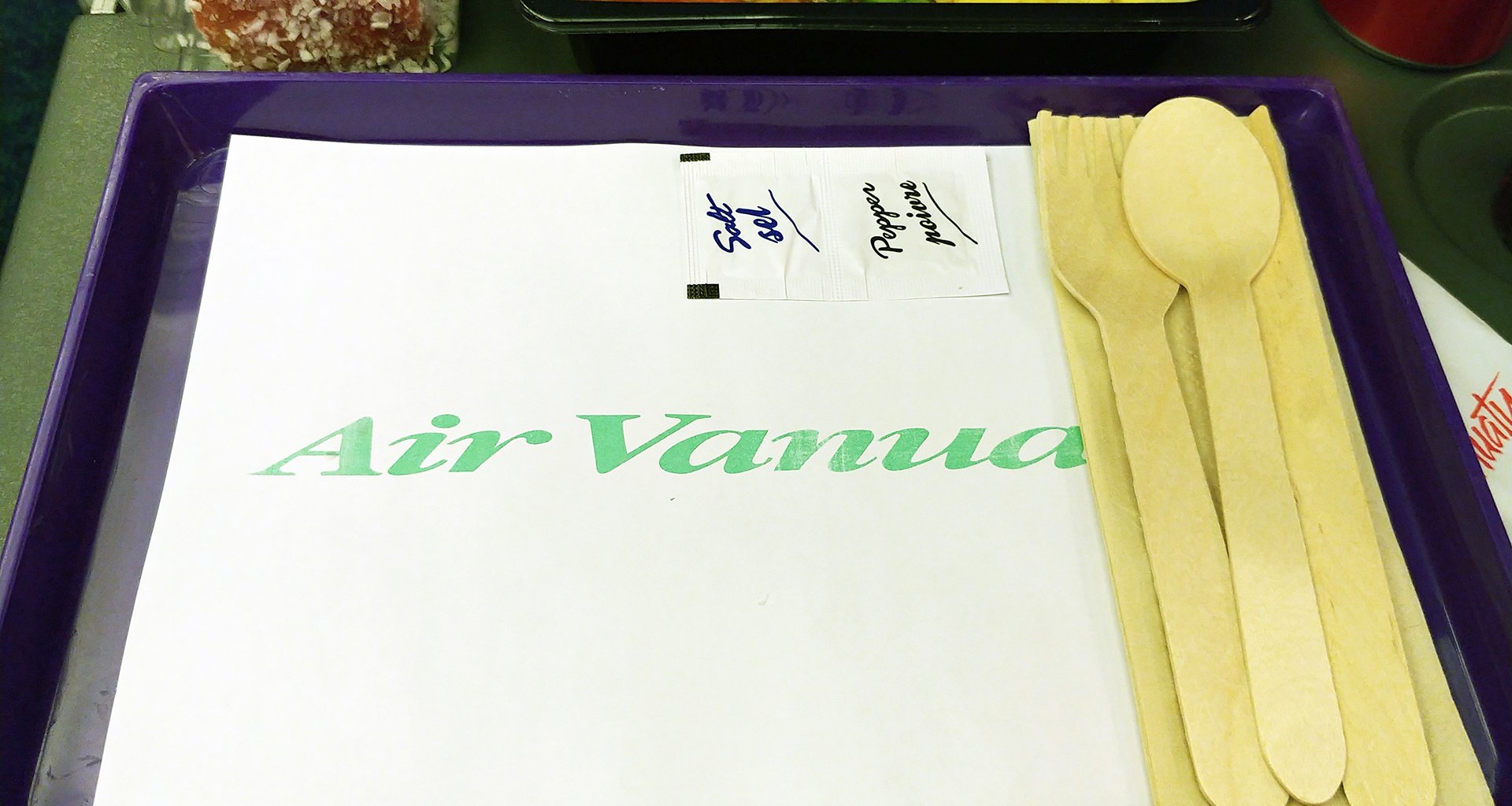 Overall my experience with Air Vanuatu was pleasant, hot meal choices on the flight to Brisbane were appreciated, and most of all, I found their crew to be friendly and approachable on all flights.