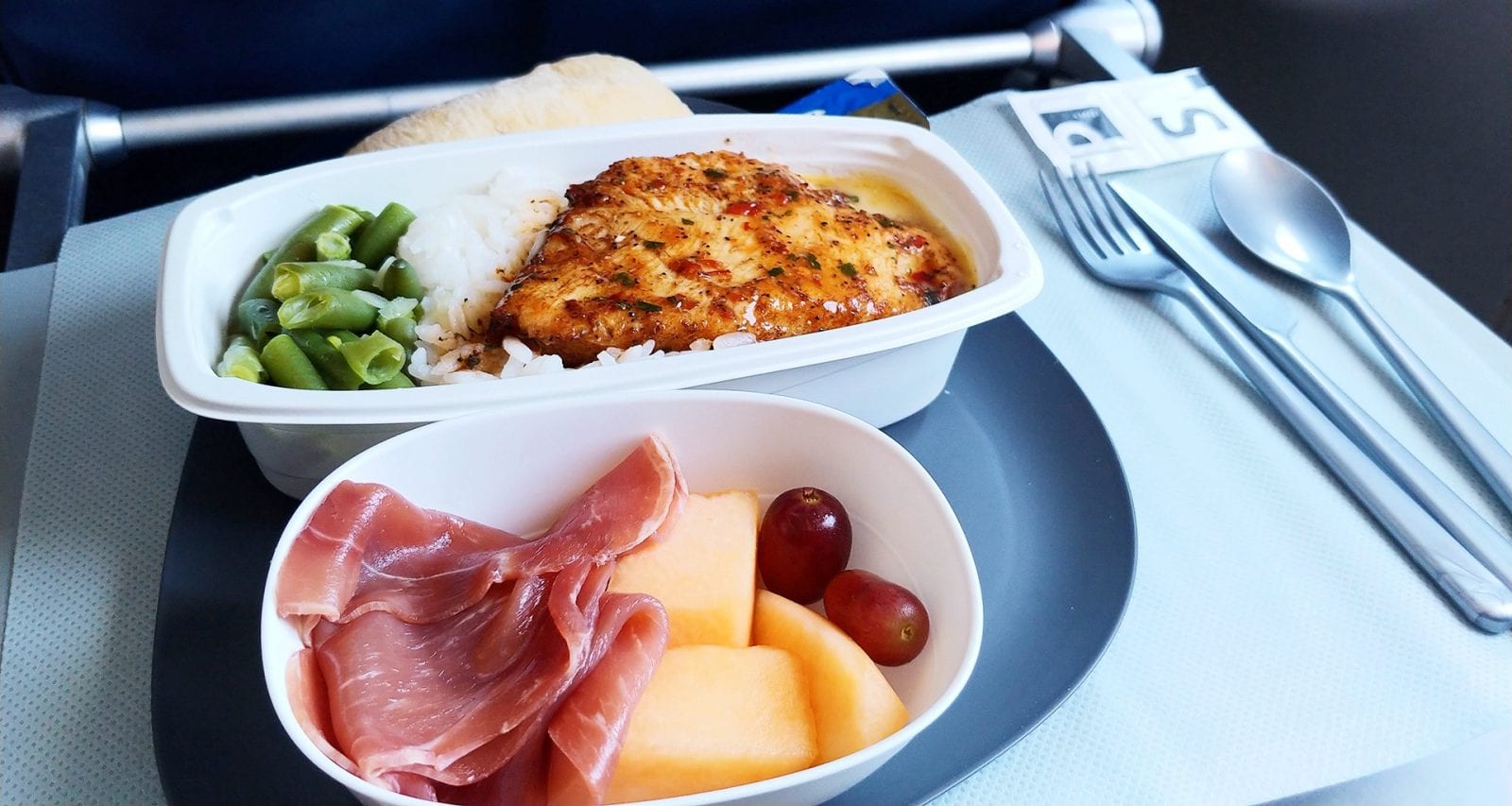 On the 5 November 2019, Delta launched a brand-new service for Main Cabin customers that feels more relaxed, offers more choice and will hopefully inspire other airlines to follow suit.

I purchased a ticket for the 7th November flight from London to Boston to test out the new service. The day before my trip, I was invited by Gate Gourmet to view some of the processes at one of their catering kitchen facilities at Heathrow Airport.

Gate Gourmet caters multiple Delta flights each day from Heathrow and the quality/quantity of the food provided on Delta flights is generous. Inflight menus are changed at the beginning of each season (called a cycle), so that means that the team from Gate Gourmet will present inflight menu ideas every two months to the Delta team. This is called a menu presentation and will look something like this:

Meals are displayed as they would be when served to you inflight.

Delta representatives meet in the airline’s Amsterdam hub each season to discuss, taste and finalise the meals that will feature in the next seasons’ cycle. For a meal to be approved, Gate Gourmet uses a smart sheet system that Delta has access to. Delta will provide feedback on the menus, and they work together with Gate Gourmet to finalise meals for the next season.

Delta scrutinises their inflight catering carefully, and they work on a scoring system inflight that uses ratings and feedback to determine which meals are wowing customers inflight. If a meal receives a high score, that meal will likely make an appearance on future flights. For example, prawns are a popular item that regularly features in the airline’s Delta One cabin, but the garnish or flavour may change to keep the dish interesting for passengers.

Furthermore, you’ll often find that Delta offers a fillet of beef in Delta One for dinner or brunch services, and you’ll typically find a white meat option, fish and pasta.

One of the most popular options is, of course, the Ice Cream Sunday with options of chocolate sauce, strawberry sauce, hazelnuts and whipped cream. The sundae is made to order by the cabin crew.

As part of my menu experience on the ground, we taste-tested the new main cabin meals for Delta. I was told that the meal portions are more significant than the previous meals.

These dishes will feature in the current cycle, and after taste testing them all, I knew exactly which one I would choose on my flight to Boston the next day.

In Delta One meals are loaded slightly differently as the cabin crew will plate up each meal. Notice the open edge on the below food packaging? This helps to create steam inside and create a better cooking environment. Once the meals are heated, they are then plated up by the cabin crew as per the company’s specification sheet.

This inflight burger took Delta and Gate Gourmet about two years to develop, they constantly tweaked the recipe to get the taste just right.

I flew on 7 November on DL 59 from London to Boston, before takeoff the cabin crew distributed a travel kit and offered headphones to everyone. Ten minutes after takeoff, the crew set up carts with water and menus and left them in the middle of the cabin behind the bulkhead at doors 3. Hot towels were distributed; they were slightly different from your typical hot towel offered on airlines.

Twenty minutes after takeoff, two crew members approached the doors 3 area, took the carts, moved to the front of the main cabin and distributed menus and bottled water to everyone. They even explained that you could choose from two appetisers with this new inflight menu.

After this, a placemat was distributed by hand by a crew member in my zone.

Shortly after the delivery of my tray mat, a PA announced that we would be offered a Bellini service. A Delta Master Cuvee created the Peach Bellini by Mionetto. It’s a sparkling wine with a dash of Hello Cocktail Co Peach Bellini Premium Mixer. It was delicious, and a decent serve too. The Bellini was served by hand from a tray.

Now let’s talk about that tray mat for a minute. As you can see above, it’s open, but I’ll show you the contents and explain more.

Its use is not explained, and it’s assumed that passengers understand how to use this. You open it up, fold it out over your tray, and take out the cutlery/napkin and salt/pepper. The cutlery is well designed and easy to use.

I received my hot meal 20 minutes after they began the service, and a few minutes later, I received my drink choice. I was asked to choose between two appetisers (Fruit and Cheese or Proscuitto and Melon) and I opted for the Proscuitto.

The crew are very generous with the pouring of drinks and it took them about 1.5 hours to complete the service up until now. The hot meal was delicious, and I couldn’t believe how tender and moist the chicken was. The beans were a little bland, but once mixed up with the rice and Hollandaise sauce, they were palatable. (Who likes beans anyway?) The meal was filling, and the quantity was adequate.

As soon as they finished the main meal service, the crew swung into action and started collecting all the trays. Two crew members operated each trash cart that moved from the front to the back of the main cabin. It took them about 10 minutes to clear the entire main cabin area, and I couldn’t believe how quickly it was done.

Next up was dessert, I kept my spoon from the previous service; however, the crew distributed the ice cream with another napkin which housed an additional spoon.

Not sure if they need to double up on spoons, but I’m sure there’s a reason why. The Beckleberry’s Ice Cream was quite good, though I couldn’t taste the salt though.

More free drinks followed the dessert cart, and two hours after departure, the crew had completed the service in the main cabin. I watched movies, did a bit of work for the next few hours and was interested to see what the second service would involve. However, in between meals, you could head to the galley and help yourself to a range of snacks.

The second meal service was prompt, and the crew turned on the lights 1 h 20 mins before landing, about 10 minutes later, service began. The carts were the same as the previous service, one food and one beverage cart followed each other.

For the second meal service, there was a choice of two hot snacks, I opted for the BBQ Chicken Pizza Twist, although the Caramalised Red Onion Chutney and Goats cheese option also sounded delicious. The snack was served with a Lilly O’Brien’s Double Chocolate Truffle with Sea Salted Caramel.

I preferred this dessert to the first one, it was amazing. You could taste the sea salt, and it was just delectable. The pizza twist was great, there was no way I could handle eating another main meal, and this snack was a perfect size and delicious.

The crew were collecting on the descent into Boston, it was rather rushed towards the end, but to be expected for a new service that had only been introduced two days prior.

Finally, a goodbye chocolate was offered to everyone in the main cabin, and that concluded the inflight service.

This was my first time flying with Delta on a long haul flight, so I don’t have anything to compare this to. However, I think the airline is miles ahead of other US-based airlines. It’s fantastic to see so much thought has gone into the passenger experience in economy class. I thoroughly enjoyed my experience, had delicious food, fabulous service and most importantly, it didn’t feel like your stock standard long haul economy class experience. Kudos to Delta and those involved for creating a more refined inflight experience in economy class.

A big thanks to Gate Gourmet as well as Chef Charlotte and Darren for showing me around their Heathrow facility. Here’s a video of my experience and more photos.