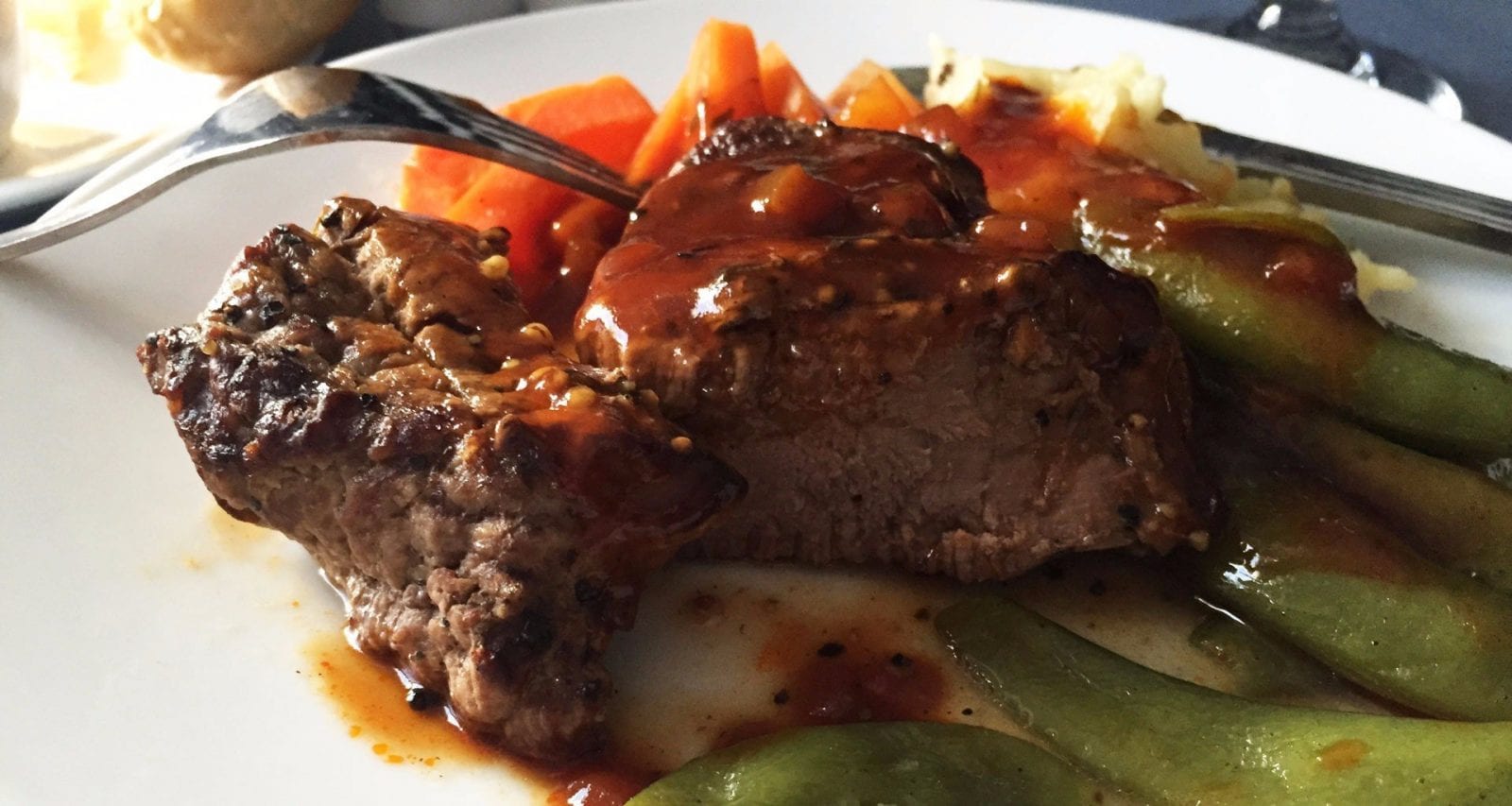 Surprisingly, United doesn’t detail the wine and champagne menu in Business class (probably because there is nothing to write home about), so it’s a case of mystery red or white. I do wonder though if selecting a wine solely based on its colour is sufficient for premium passengers when it seems that other airlines on similar routes have a full wine and champagne menu.

Nevertheless, for my pre-departure drink, I chose the Nicolas Feuillate champagne but was slightly shocked to see it delivered in a plastic cup along with chewy, warm nuts (yes chewy!).

Well, unfortunately, the entire inflight food experience was a bit of a miss. Bread options consisted of the classic white and grain, “bretzel” bread and under-cooked garlic bread. The salmon appetiser was dry, tasteless and the wasabi mayonnaise was overly salted (and the consistency was more like a paste rather than creamy).

The steak was overcooked, and the marsala sauce was too salty, added to this the overcooked carrots and peas had a very strange goat cheese aftertaste. The presentation was very disappointing, as the different parts of the meal seemed to have been “thrown” on the plate rather than dressed.

As for dessert, United offers its signature Sundae on all its flights. Served from the cart, there is a choice of caramel or chocolate sauce, with strawberries and almonds as toppings. Somehow after such a disappointing lunch, some fresh fruits or a more elaborate dessert selection would have been welcomed.

United kept the worst for last. As a pre-landing snack, the menu offered only one option: a chicken sandwich. Again, one wonders what can go wrong with such a simple and uncomplicated meal, and this is where United surprises again, but for all the wrong reasons.

Instead of a sandwich (club, baguette or even a wrap), a burrito-style snack was served. Inside? A mystery filling of mixed vegetables, creamy sauce and what must have been chicken in another life, the whole thing was tasteless and looked like…Well take a look, need I say more!

Even the fruit salad had seen better days, and the Lily O’Brien’s chocolates looked like they had been forgotten in the freezer on several transatlantic flights before being served.

Having mostly flown on European carriers on US-bound routes, it was interesting to compare products with an American carrier. While the seat, the crew (which were fantastic on this flight) and the general state of the aircraft were competitive with the likes of Lufthansa, Swiss, BA or even Air Canada in business-class, regarding dining options in the sky, United has (a lot of) room for improvement.

How to order a special meal on United