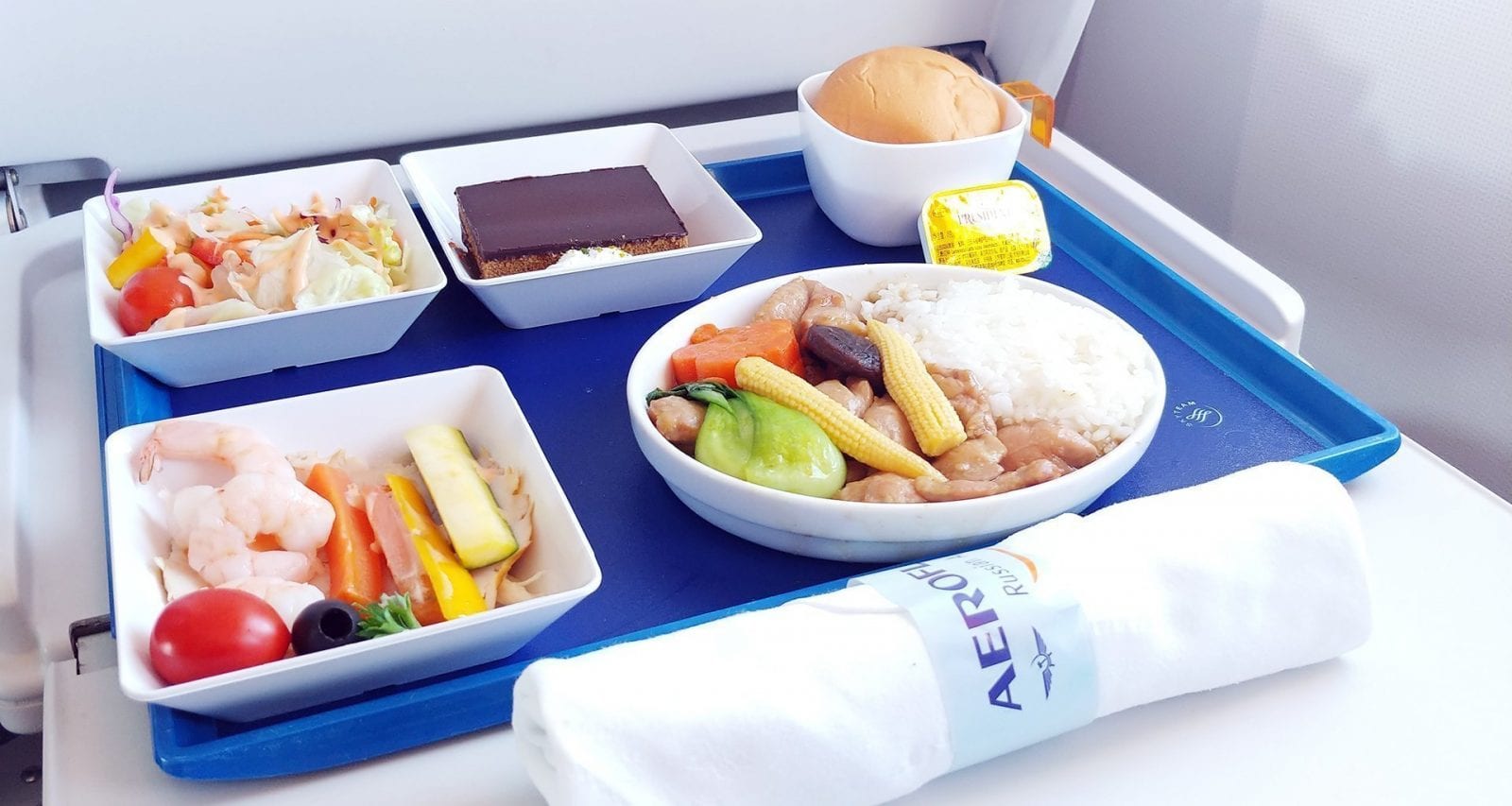 It was my first time on Aeroflot, flying from Beijing to Athens in November 2018 in economy class. Well before I booked the flight, I reached out on Twitter to see what people thought about Aeroflot, and the comments were surprisingly good. The fare was cheap, and so my expectations were quite low.

Before check-in at Beijing Airport, I decided to upgrade my flight to their premium economy class called ‘Comfort Class’. The cost was minimal, about USD$120, and in return, I would receive enhanced meals, more space and comfort.

The inflight menu was as follows.

Twenty-five minutes after take-off, the cabin crew moved through the cabin to offer drinks and snacks before lunch. I ordered a juice which was served in a paper cup and also received a bag of nuts.

The meal service began immediately after the drinks service; service was very prompt and friendly. One cabin crew member worked on each side of the aircraft alone and moved from the forward to the rear of the cabin. I ordered the chicken with rice as my first choice of Cannelloni was not available; the chicken dish was served in a porcelain dish on a large tray. In addition to the hot meal, there was a starter of turkey and shrimps with vegetables, bell pepper and lettuce, a chocolate cake, and a bread roll. There was proper metal cutlery too and a linen cloth.

I chose the local option, which wasn’t to my liking. There wasn’t anything particularly wrong with the dish, but the flavours didn’t impress me at all. The rice was soft and delicate, the vegetables were crisp and tasty, but I found the chicken to be quite flavourless, albeit still edible. I enjoyed the prawn starter; everything was fresh and crispy, as was the salad. The chocolate cake was disappointing as it was rather tasteless.

Overall I thought the quantity of the meal, the choices, service and general offering of this premium economy class meal was adequate.

I was surprised to see such a large meal-offering again on a flight of only seven hours. Most other airlines would cut back the service on the second meal service and perhaps offer a smaller meal or snack.

I enjoyed this meal a lot more than the first one, the prawns were cooked in a sweet/sour sauce combination, and the flavours were well balanced. They didn’t skimp on the number of prawns, and the rice and vegetables were good overall.

The rest of the meal consisted of a duck and mushroom galantine, smoked salmon and salad. I decided to skip dessert.

The crew struck up a conversation with me and were curious about all the photos I was taking. I asked if I could take a look at the economy class meals and within a few minutes, they brought me one. I have no idea what it is, I never asked, and it also has two entree dishes on it, instead of a dessert.

After transitting in Moscow Airport, I boarded my flight to Athens and flew in economy class. Once again, the crew was amiable and efficient, immediately after take-off they delivered the inflight service. There was a choice of two hot meals, and I opted for the Pasta Bolognese.

Of all the meals that I ate on Aeroflot this economy class dish was probably my favourite. Perhaps because of the simplicity of the meal, but also because it tasted so great. The meal reminded me of similar dishes I’ve received when flying with Aegean Airlines, but the best part was the Praynik. The Praynik (top right-hand item) is a ginger-spiced cookie with hints of nutmeg and spices and goes back hundreds of years in Russia.

Overall I would say that I was pleasantly surprised by the inflight service on both flights. I wouldn’t hesitate to fly with Aeroflot again. I did enjoy the catering a lot more from Moscow than I did from Beijing, I’ve always found that catering from China can be hit or miss sometimes.