I love flying with Turkish Airlines, you always know that you will have a tasty, decent and quality inflight meal regardless of which cabin you fly in. I recently wrote about their inflight meal experience in business and economy class right here. I wasn’t expecting to fly with them so soon, but a last-minute trip in December to Montreal saw me booking them yet again.

I flew from Athens to Istanbul in economy and Istanbul to Montreal in business class, the best part of my long haul flight was spending time with the inflight chef in the galley. (You can check out the Youtube video right here)

But more about that a little later, aimed with my trusty note pad and timer I set out to see exactly what services the crew offer on these flights.

First up, I visited the Aegean Airlines lounge in the Non-Schengen departure area of Athens Airport. Turkish Airlines does not have a lounge at Athens Airport; however, their Star Alliance partner lounge was more than adequate. The lounge opened in December 2017  and offered a fantastic Nespresso machine, freshly pressed juice, yoghurt and an assortment of snacks. 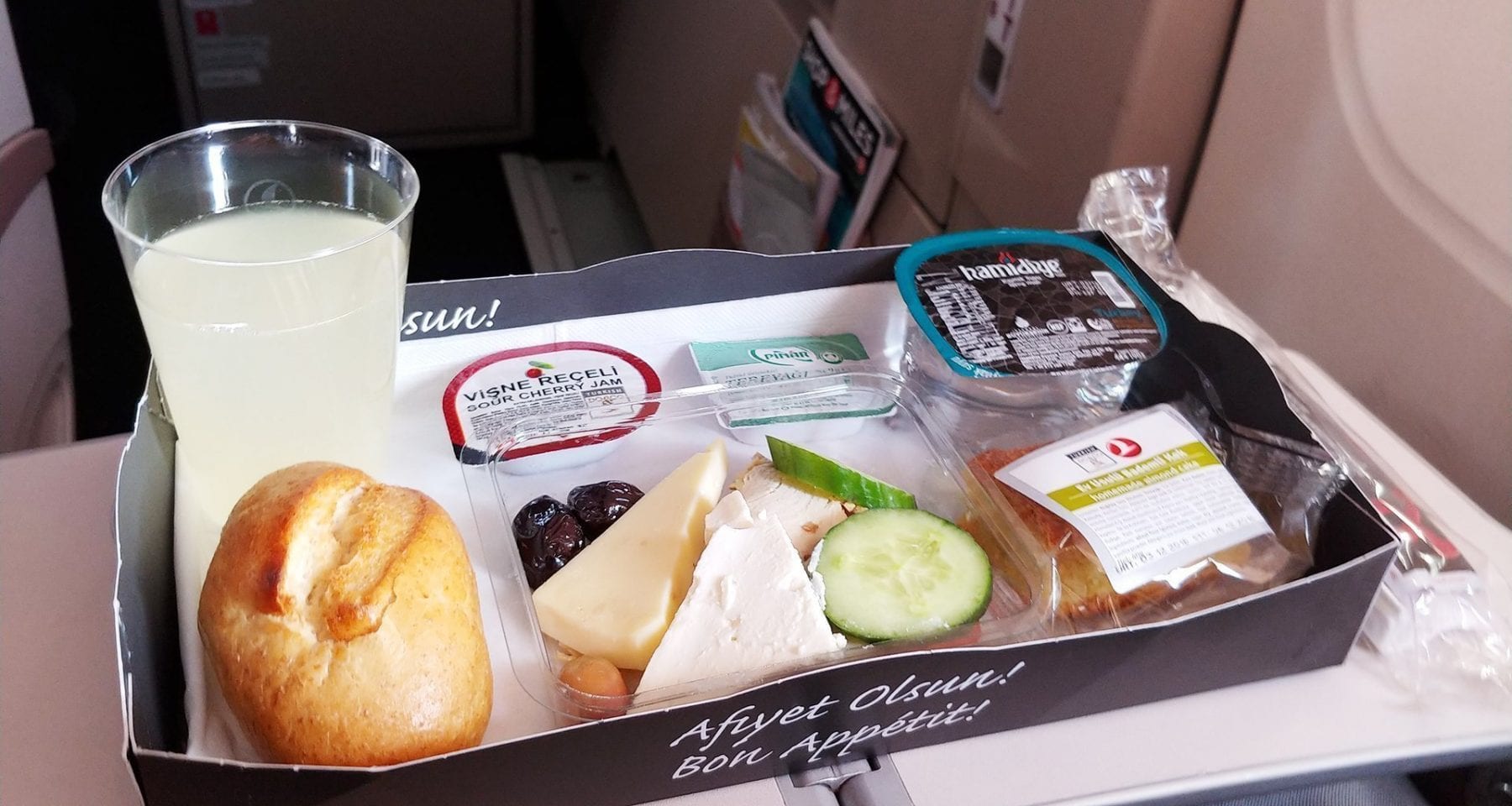 Athens to Istanbul was a quick 1-hour hop; the cabin crew completed a service which included this fantastic little picnic offering, and of course you had a choice of drinks also.

This meal of fresh olives, cheese, chicken and tomato along with a piece of Almond cake was more than adequate for this flight; it was fresh and delicious. Certainly very decent when compared to what you may receive on similarly timed flights on other European carriers.

After a transit and a visit to the Turkish Airlines lounge in Istanbul, it was time to board my flight to Montreal.

There were four crew working in business class and before departure they offered:

A choice of pre-departure drinks included: Berry, Orange or Lemonade, I opted for the Lemonade.

The Inflight Chef then came through to deliver inflight menus to everyone; he then took everyone’s meal orders before take off. I observed him explain every detail of the meal choices and it was obvious that he genuinely wanted people to be happy with their meal choice. 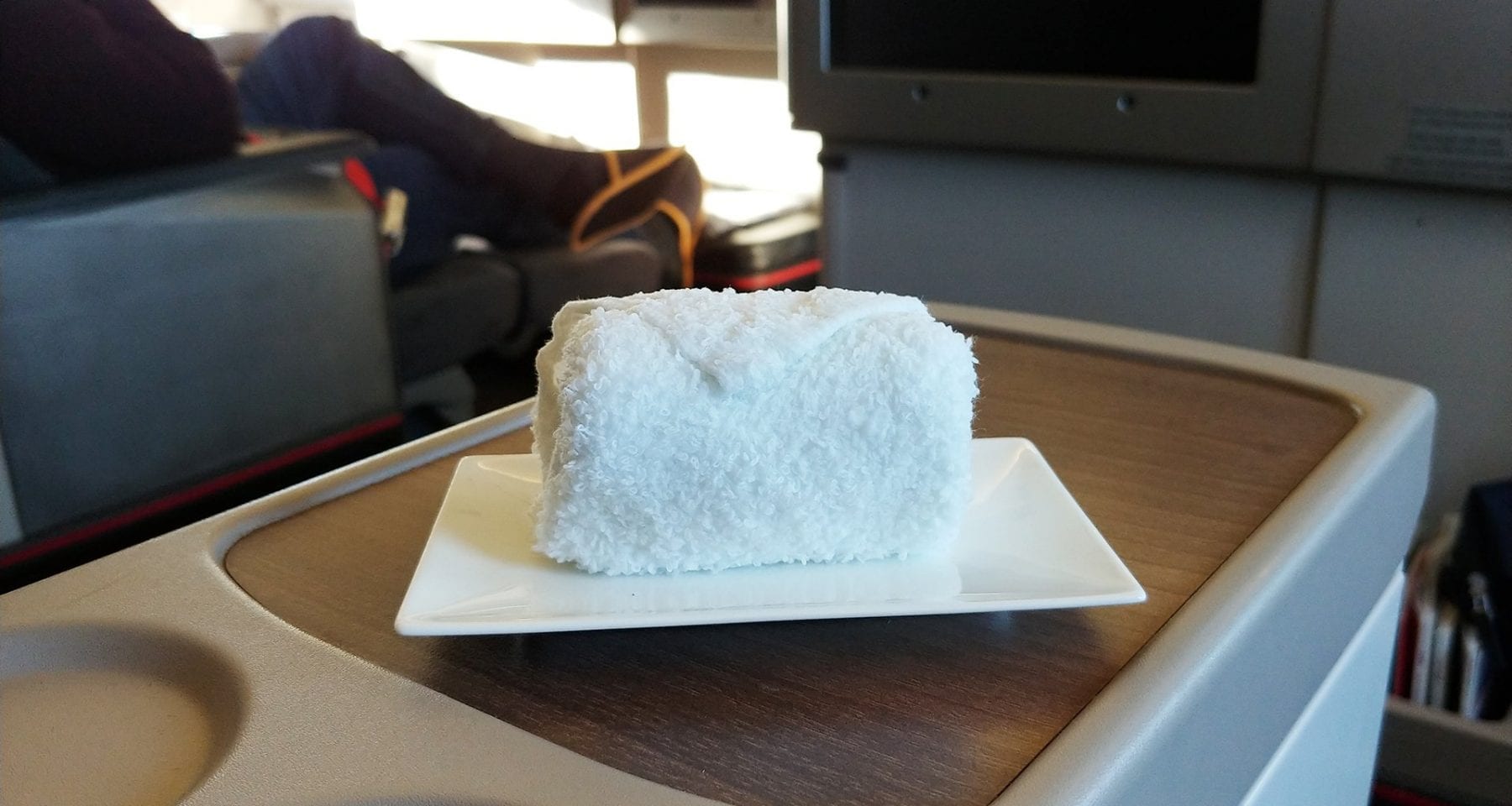 The flight was scheduled to depart at 1545 local time, with a flight time of about 10 hours, and we departed at 1610. After takeoff at 1625, the crew distributed hot towels to the business class passengers. 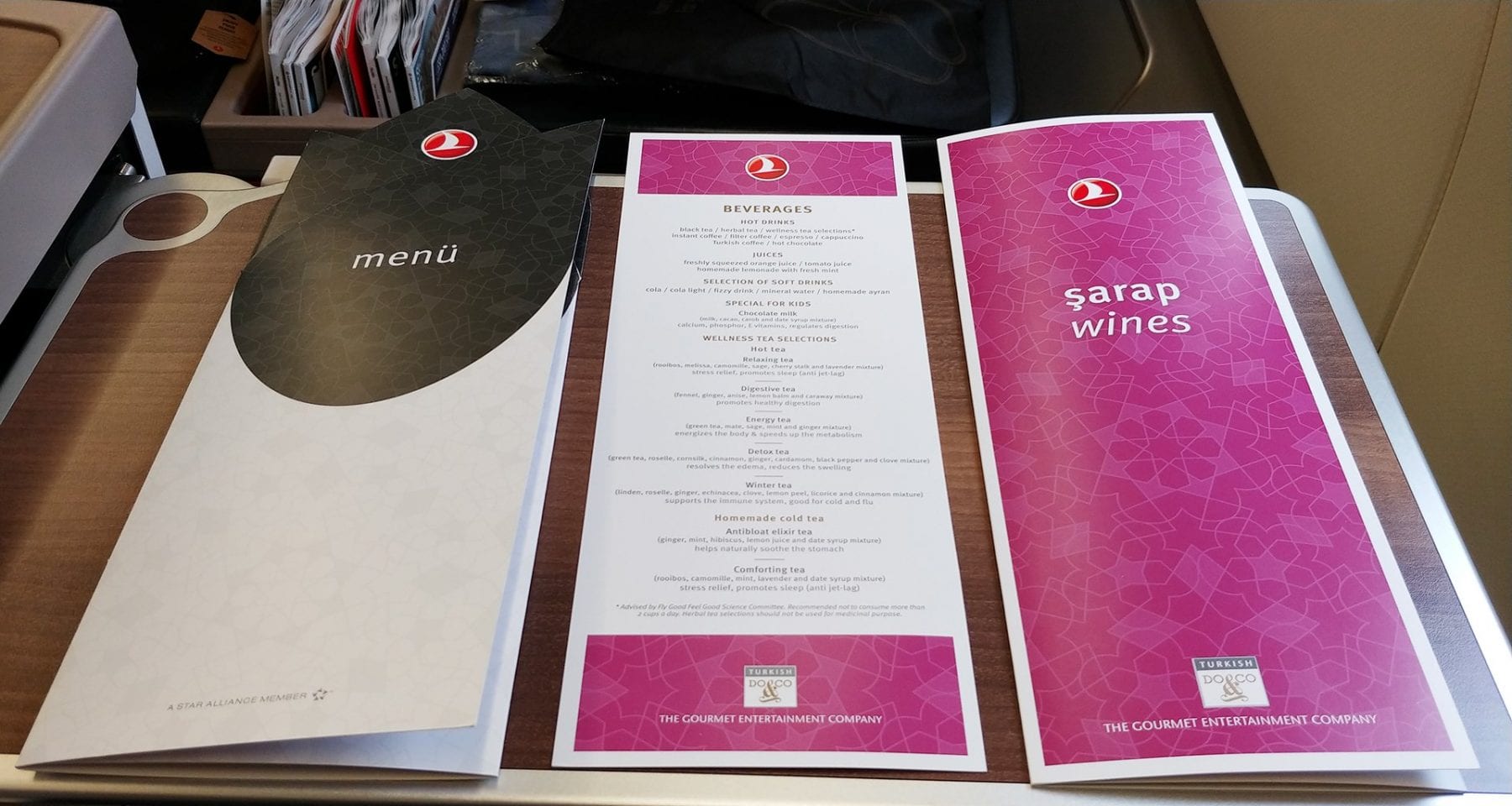 Rose Saraplar (2017) from the Aegean Region in Turkey.

On top of that, there was a selection of non-alcoholic drinks and teas, including: 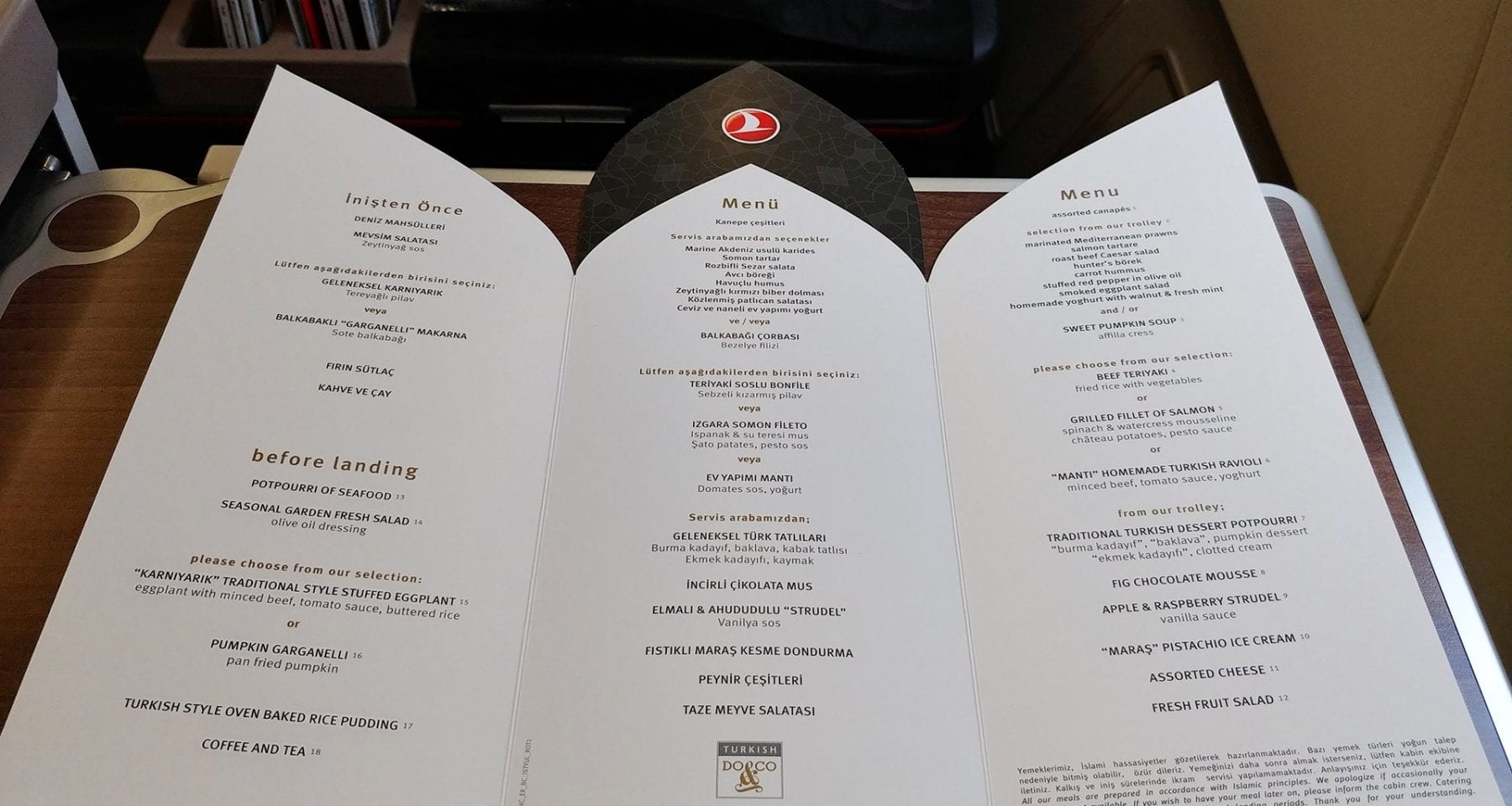 On today’s flight, there will be two meal services, for the first meal service, there are eight different entree options and three main meal options to choose from.

After the hot towels were collected the cabin crew took drink orders for the entree service, and then prepared your meal tray with the tray cloth, and delivered your drink order with some nuts. The chef then offered you an amuse-bouche. 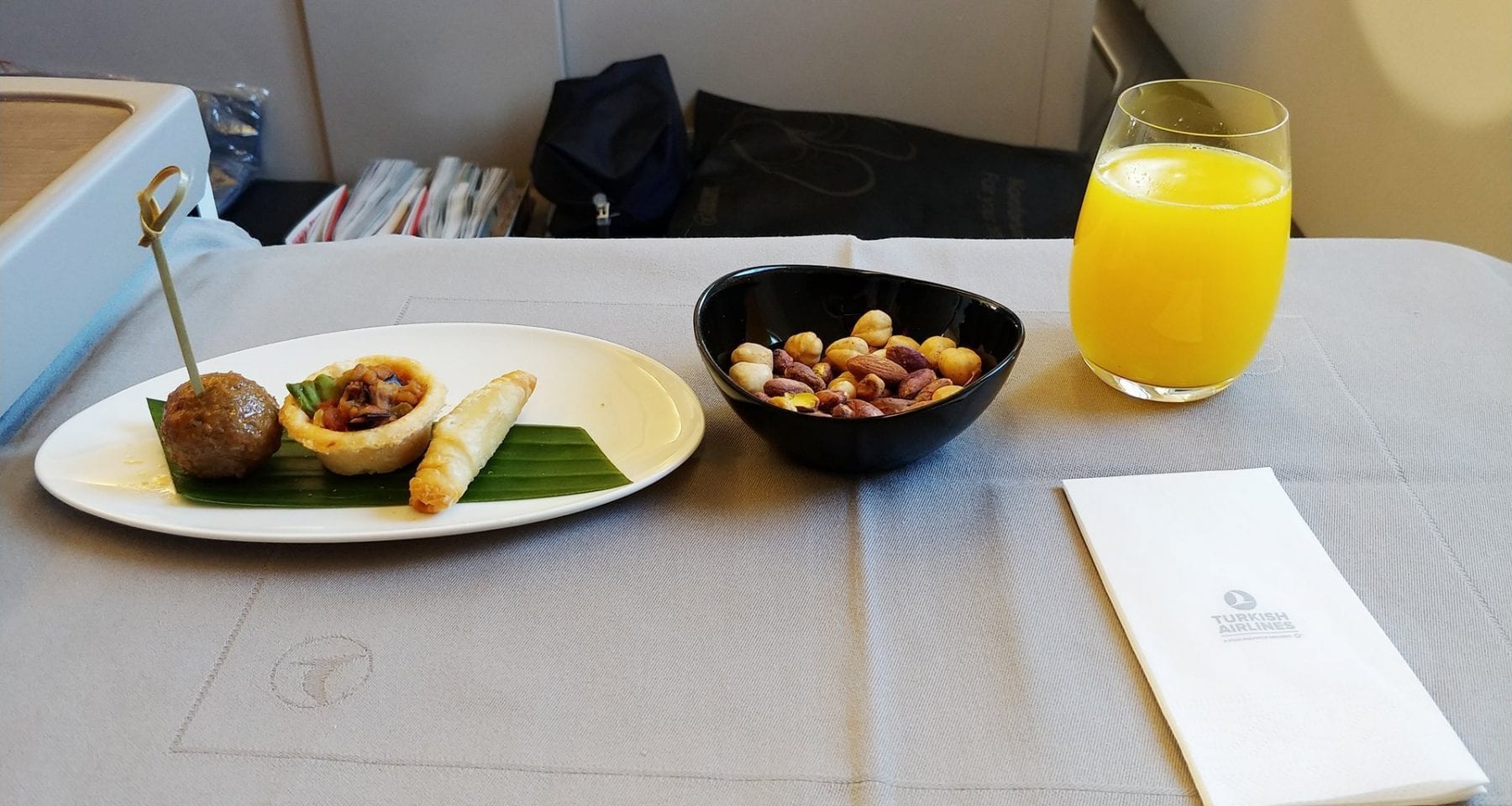 Once I finished my amuse-bouche, the cabin crew cleared everything from my tray. Meal tray set up would be completed again by the crew from the main service trolley.

This set up was completed at 1710, just one hour after takeoff. I like the side dish of oil, spices, butter, bread and those creative Salt and Pepper shakers.

The entree trolley then came through the cabin, and the chef asked you what you would like to sample from the entree menu:

Everything sounded wonderful, so I told him to surprise me with my entree. 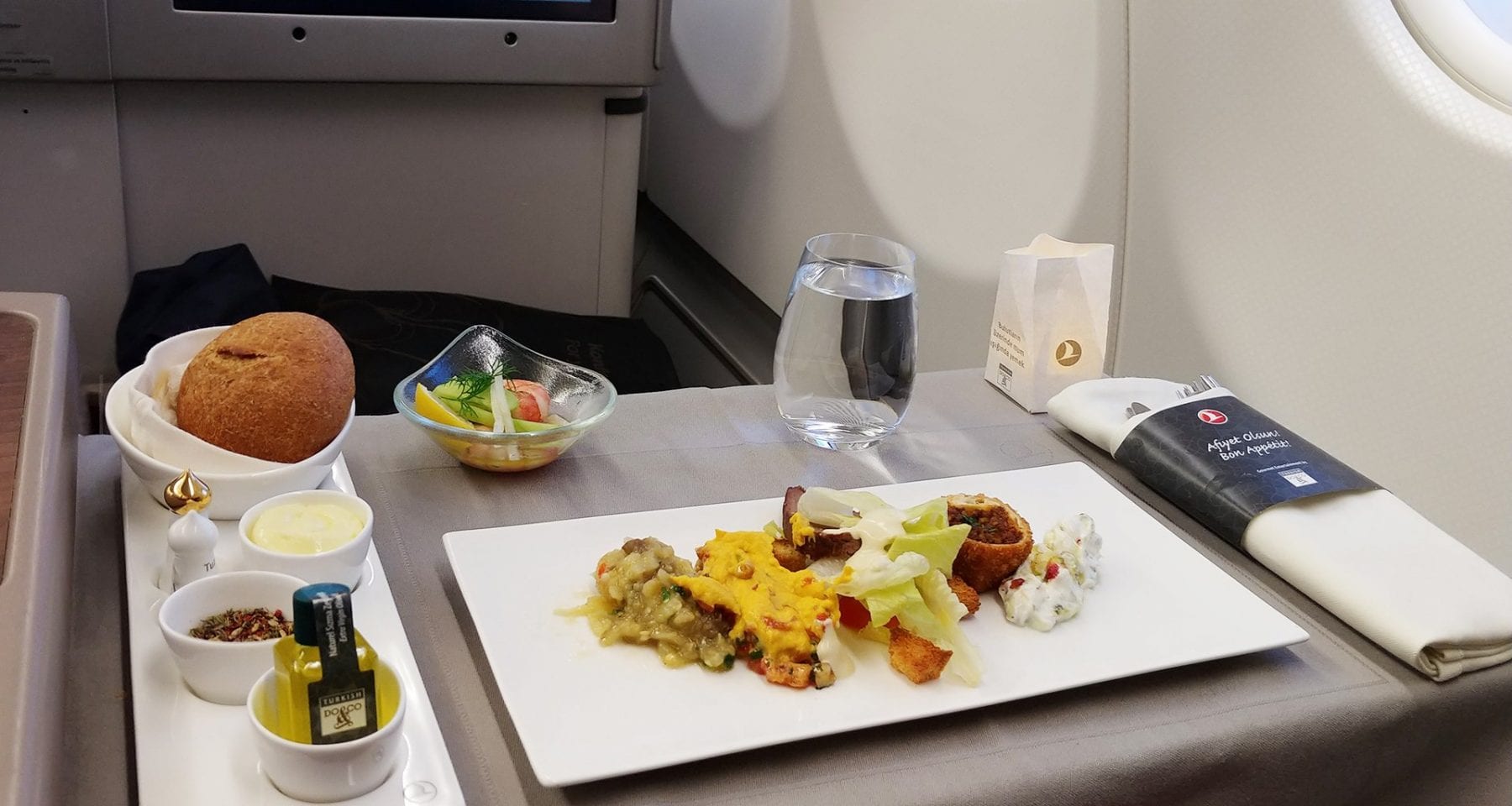 My entree was fresh and prepared with quality ingredients. I couldn’t fault any of these starters; my favourite was the smoked eggplant, it was truly delicious, and the smokey flavour was prevalent.

It was now 1800 and time for the main meals to be served, I opted for the Turkish Manti, it was a dish that so many people recommended I try. However, I also managed to get some photos of the other dishes served onboard.

The Manti was remarkably good; I am pretty sure that it’s still hand made by the airline’s caterer Do&Co. Manti is a dough-based product that is rolled out and filled (in this case) with Beef, boiled and then served with a tomato and yoghurt sauce. It’s a bit like ravioli, but so much better.

Here is the story of Mantı, the favorite Turkish dish of over 5,000 people who took part in our Twitter survey. #LoungeIstanbul pic.twitter.com/z2VqVswOr7

I didn’t sample this meal; I took a picture of the finished product so you can see it — beef Teriyaki.

And here’s a look at the Grilled Fillet of Salmon.

I finished my main meal by about 1825 and then it was time for dessert, the dessert service started at 1845. 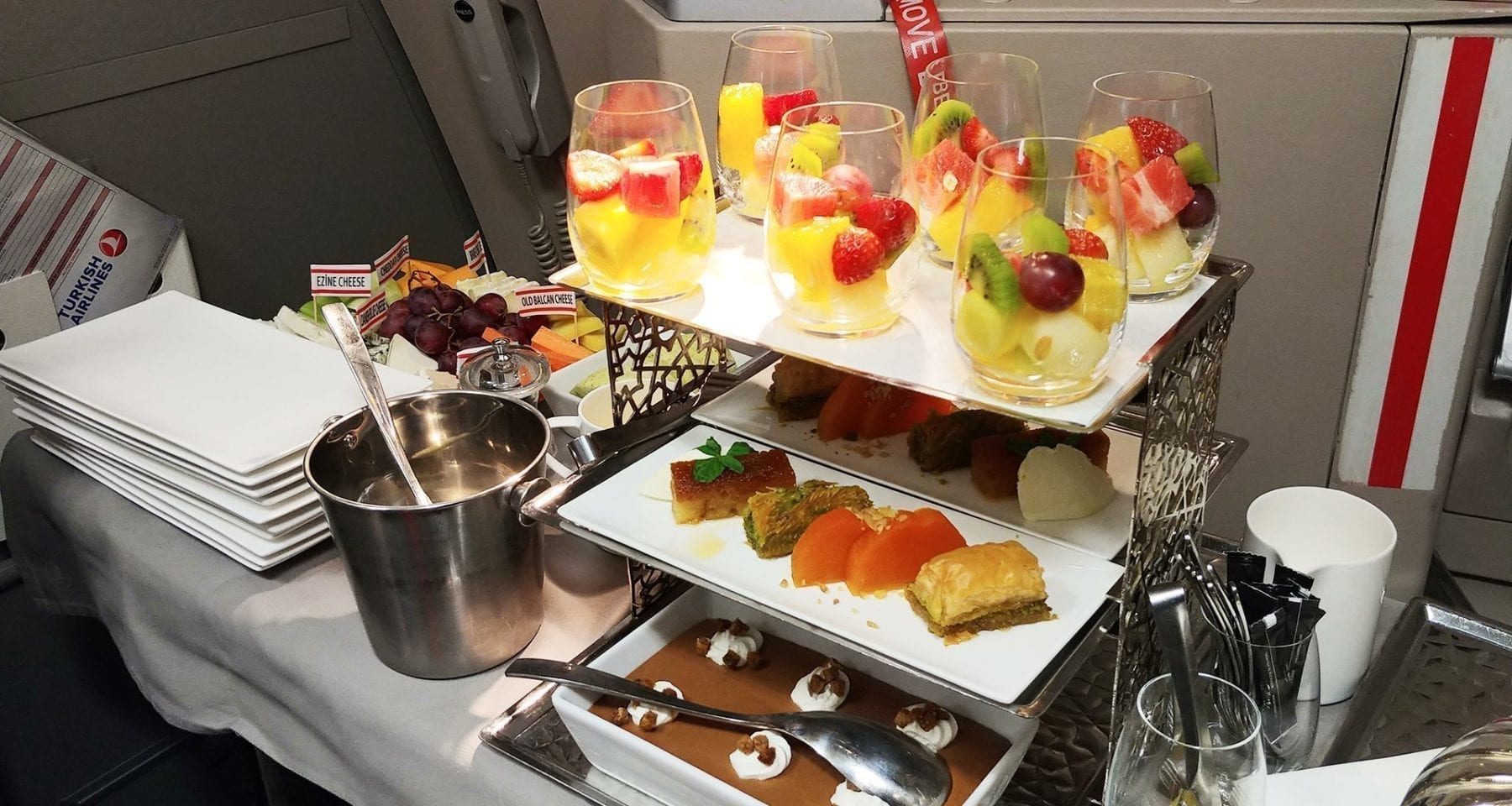 For dessert I opted for the chocolate mousse, it was very creamy, rich and not too sweet and oozed of homemade taste.

Other dessert options on the trolley included:

I asked for the fruit on the side to make me feel better about myself for eating that mousse.

At 1915, I retired to bed, the service was complete, and the cabin lights turned off.

Two hours before departure, it was time to eat again, the cabin lights were turned up, and everyone offered a hot towel.

This time the service was slightly different, everything was delivered by hand, and there were no trolleys in the cabin. The chef came through and delivered my tray of:

Once I finished my salad and seafood, I was offered a choice of:

I opted for the Eggplant, and it was a great choice.

The entire second service took only 35 minutes for the crew to complete; it was quick but didn’t feel rushed.

As always, my meal experience on Turkish Airlines was spectacular in business class, and the short economy hop was also pleasing. The airline aims to reflect as much of their culture inflight as possible, and this is undoubtedly the case with the carefully crafted inflight food menu and offerings.

The chef adds some inflight flair and fun to the dining experience, and it’s always great to engage with them. I won’t comment on the service I received as the airline knew I was on board the flight as I required filming permission. However, I can safely say that the other passengers enjoyed themselves, and looked as though they too enjoyed those delicious meals.

I paid for my ticket and received an upgrade to film and create this story.