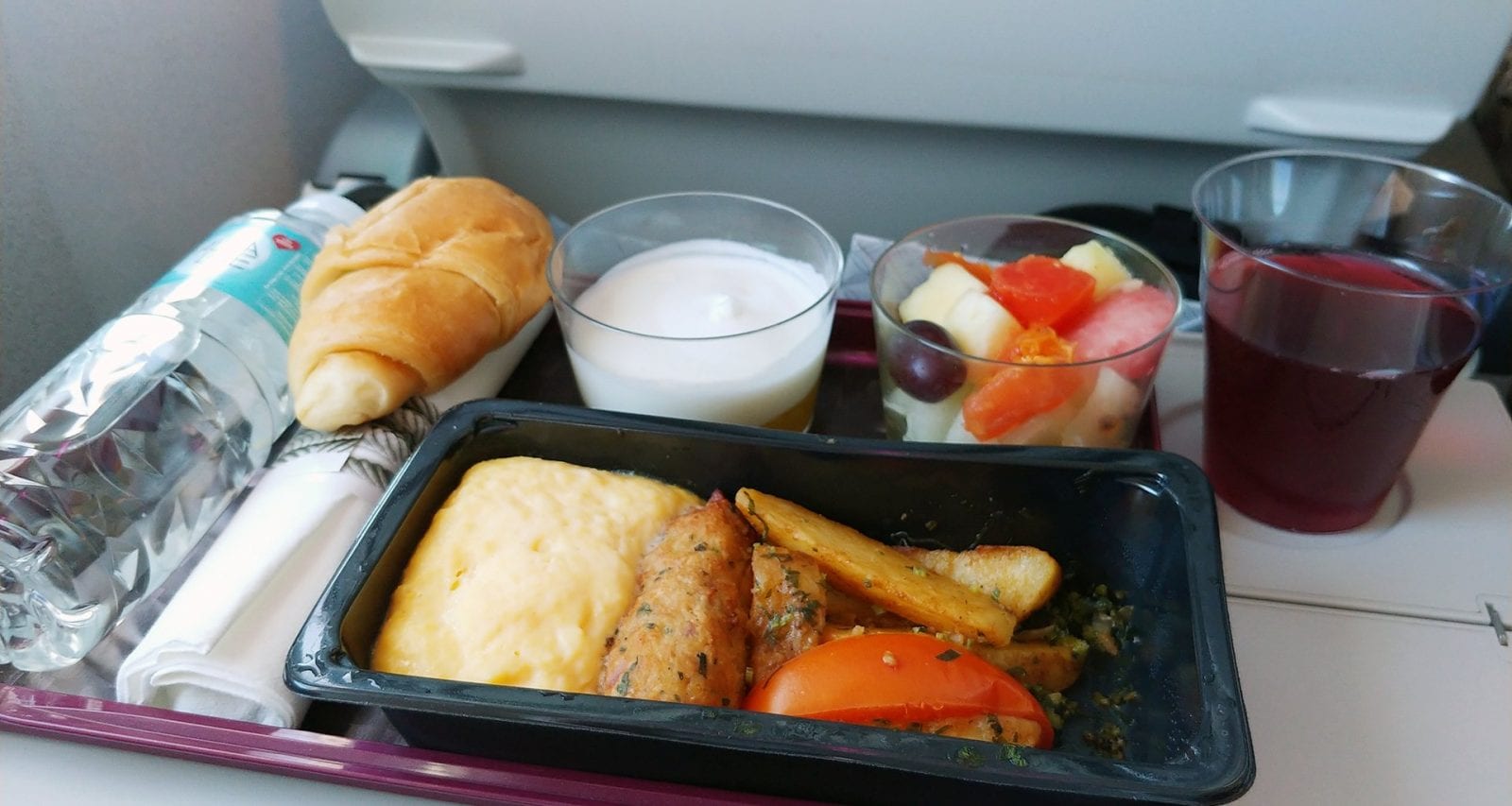 Regardless of the cabin you fly in, Qatar Airways is renowned for having some of the best inflight service. But what about the food? I was curious to learn about their experience in economy class.

I was greeted warmly by the attentive crew at the boarding door, and as I walked to economy class, each crew member greeted me as I passed.

Before long, the crew provided hot towels, headphones, and amenity kits. It was nice to experience so much  service before take off.

About 10 minutes after takeoff, the crew were released from their seats, and they started to prepare for the service. Inflight menus were distributed just after this.

During this leg of the trip, I opted for a vegan meal to experience this option. Alcoholic beverages included three types of wine: red (Bombay Saphire Gin), white (Smirnoff Vodka) and sparkling (Dewar’s white label Whiskey). Beer from Heineken, Brandy/Liqueur choices and Pepsi, a variety of coffee and Ceylon Tea and eight different cocktail alternatives.

Thirty-five mins after taking off a crew member came to my seat, knelt and confirmed my special meal order. A few minutes later, the meal carts travelled through the cabin, and my meal was delivered.

Economy class passengers on Qatar Airways have three options for meals, an infused focaccia bread (which is unusual in economy class), fresh fruit, salad, and a dessert.

The vegan meal was a vegetarian bean croquette served with rice and tomato sauce. The rice was slightly dry; the croquette was bland; in fact, I’d go as far to say it tasted like cardboard. The rice starter was quite tasty and packed flavour. What I loved about the economy class meal tray on Qatar were the small touches like proper cutlery, the focaccia bread and the presentation of the napkin.  I was disappointed in the meal’s flavour and overall quality; I think my expectations were a bit too high.

About 1hr and 15 mins after takeoff the crew came around to collect all the meal trays and they offered an additional round of drinks. I asked if I could see one of the standard economy meals. The crew obliged and came back with the Chicken Kapsa, I had a few mouthfuls, and it was much better than the vegan option.

Four hours into the flight, the crew commenced the second meal service. For my special vegan meal, I received a spinach and lemon dahl heated wrap. For a 5h 25min trip, they certainly provided an adequate amount of food.

I enjoyed the wrap, and there was certainly no way I could stomach another full meal tray as we had only eaten a few hours before.

My next flight was from Doha to Bangkok, which took about 5.5 hours. On the ground, the same service pattern was followed as with the first flight.

I selected the western breakfast when I should have perhaps opted for the stir-fried noodles. The eggs were quite tasteless and hard; the only decent part of the hot meal was the sausage. I was quite disappointed with the main meal overall.

Around 1hr 50mins before landing in Bangkok, the second service began, the same snack offering was distributed by the crew. There was a choice (I can’t remember the other choice), but I opted for the Chinese Barbeque option, it was delicious and the perfect snack considering the flight time.

I can’t fault the service on any of my Qatar Airways flights, the crew was professional at all times, their service language polished, and they were highly competent crew members. I don’t think I’ve come across another airline where all the crew are of the same standard, no matter what flight you take. I guess it all comes down to the training that the airline offers their crew.

I’d happily fly the airline again; there are some great touches in economy class, I just wish their hot meals were of a slightly better standard.