After flying to Cairo with Aegean Airlines, I was ready to head to my next destination Bangkok. I booked a business class ticket with Royal Jordanian, and it was my first time flying the airline. Departure from Cairo was just before 9 pm, and the flight time to Amman would be just over 1hr and 10 mins.

The crew were very welcoming during boarding, and soon enough, they were offering Arabic coffee on the ground.

I love the taste of Arabic coffee, so I took a cup and savoured it. About 12 minutes after takeoff, the crew member came through to take food and drink orders. There were no trolleys in the cabin, and she moved from seat to seat taking orders. For my drink, I ordered a Tomato Juice, and she mentioned that there were two options, Spicy or Normal, she suggested I try the Spicy option which I did.

About 30 mins after take off my tray table was set up for service, and everything was hand run from the galley, it took the crew about 50 minutes to complete the business class service on this flight. Very impressive!

The food was an Arabic mezze with a side salad and bread. I recognise the tabouli and moutabel, but I can’t tell you what else what on the plate. It was all so delicious and fresh. In fact, I think this would have to be one of the best business class meals I have received on such a short flight in a long time.

There was even time for dessert, when the crew member took my tray away, she asked if I wanted something sweet. I accepted and was still eating it as we descended for Amman. The fig cake was gooey, full of figs and not too sweet, just perfect in fact.

Before I knew it, we had landed in Amman, and I was in transit awaiting my next flight to Bangkok. But unfortunately, this is where things started to go pear-shaped.

My flight on 28 June from Amman to Bangkok was scheduled to depart at 0230, but we ended up leaving at 7 am. The pilots had found something wrong with the aircraft and engineers tried for hours to fix it, but it wasn’t meant to be. In the end, they swapped our plane. Having worked in the airline industry, I understand that things can go wrong at any moment, planes go tech all the time, crew are delayed, weather, and so on. However, my issue with the airline, in this case, was that the delay was handled very poorly by the airlines ground staff at their lounge and the gate agents. Information was scarce, their attitude was dismissive, and while I was lucky to relax in the lounge, many passengers sat at the gate without food or drinks for many hours.

We finally left Amman with a five-hour delay, I had onward connections to Melbourne, and I knew I was going to miss them. But there was nothing I could do until I was in Bangkok. As soon as I boarded the aircraft, I went to bed and skipped the service, a first for me. I woke up several hours later and ended up experiencing the breakfast service, and there were two options a Spanish omelette or the Oriental breakfast. I opted for the Oriental Breakfast. 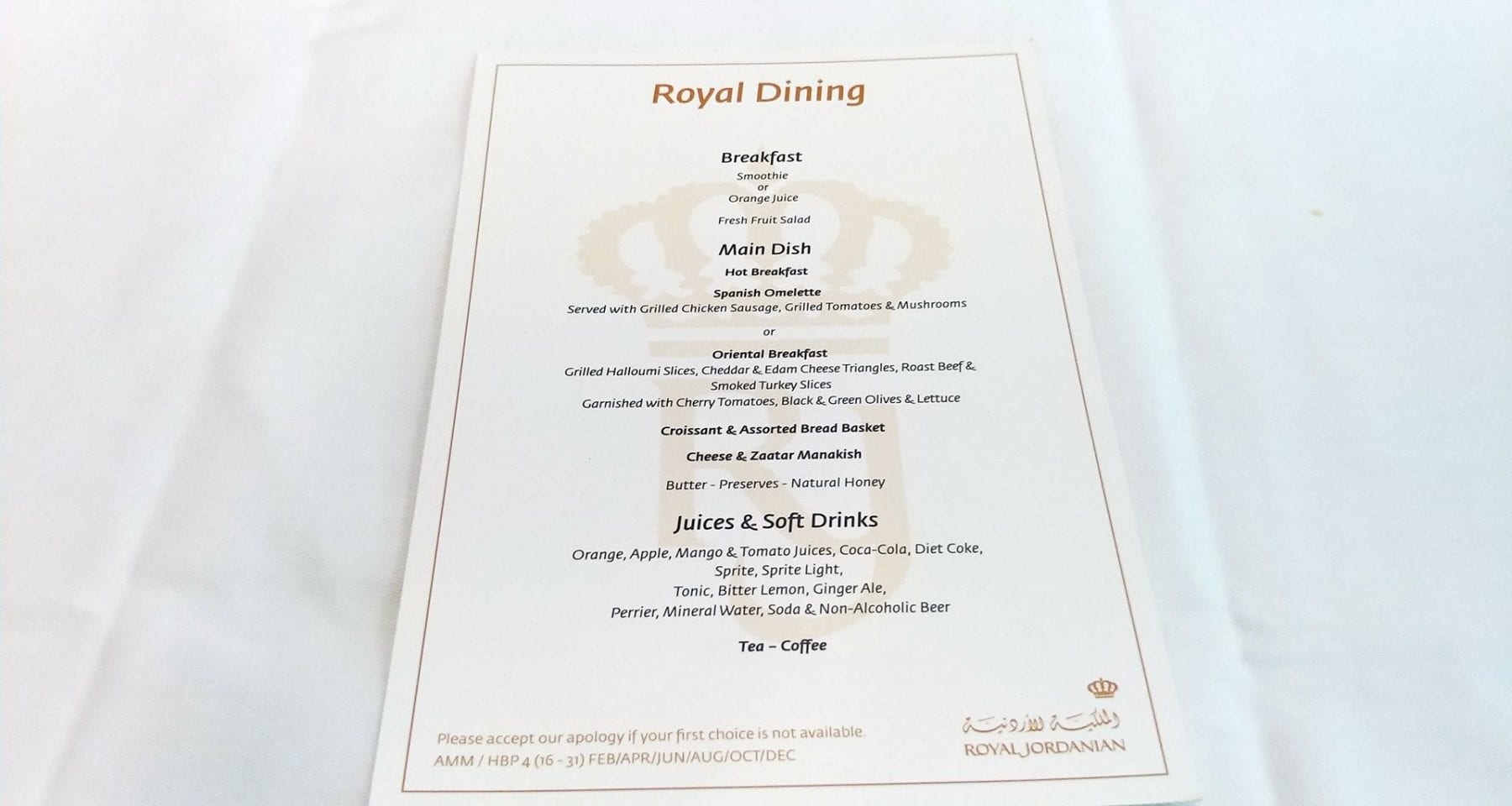 I enjoyed the breakfast, it was nice to experience something local, and flavoursome. My tray table was covered in cloth, and everything was laid out for me, breakfast included freshly cut fruit, some bakery items and an assortment of jam. The main plate had cold cuts of meat, cheese, and bread covered in Za’tar, yum.

I wasn’t looking forward to flying the return sector back to Amman since the last one had been a disaster with the delays.

Before I stepped onboard my RJ flight, I visited the Cathay Pacific lounge at Bangkok Airport for a quick bite to eat and to relax. No one was there, I had the place to myself, and the staff seemed happy that someone had turned up. I sampled the Noodle Bar and other food offerings available in the lounge. Here are some photos. 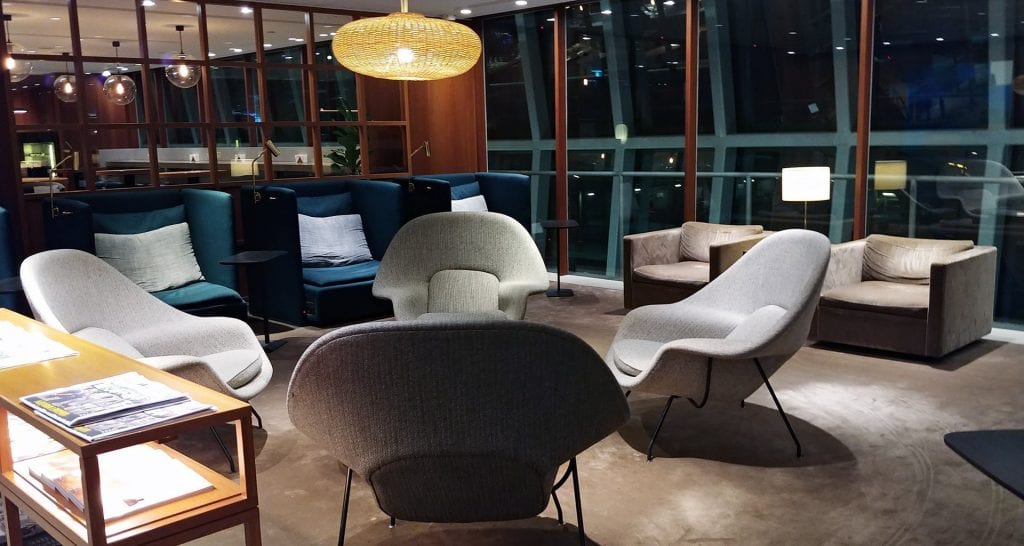 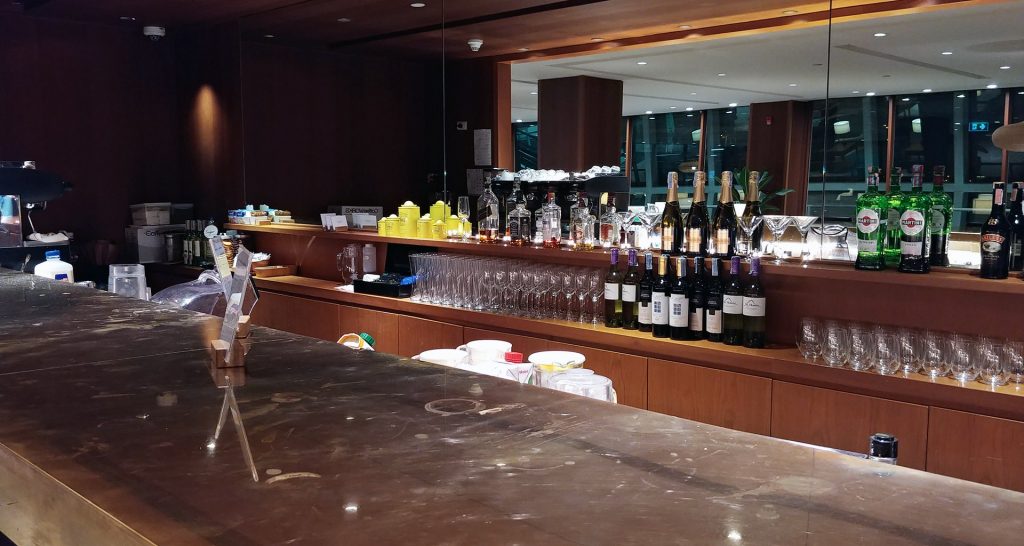 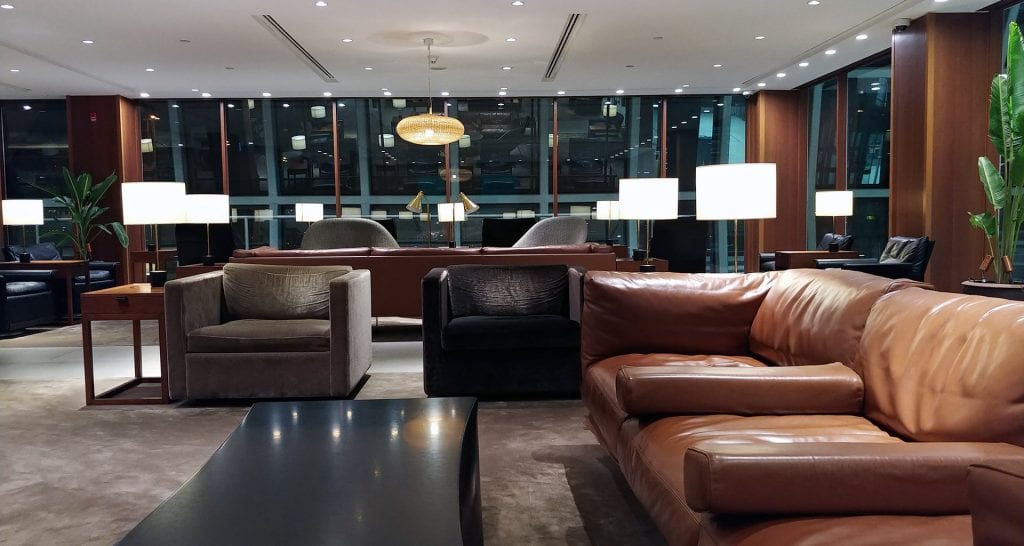 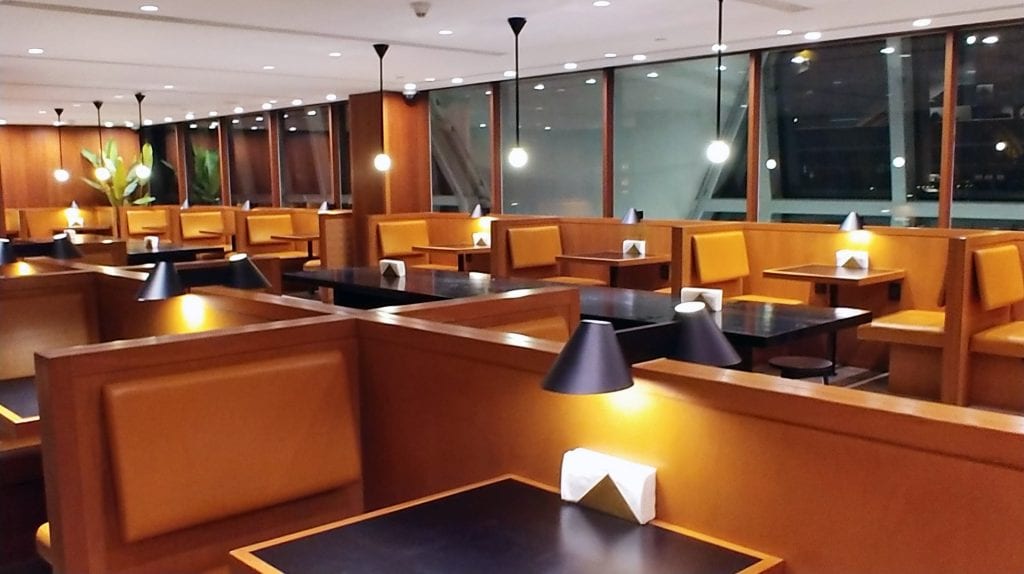 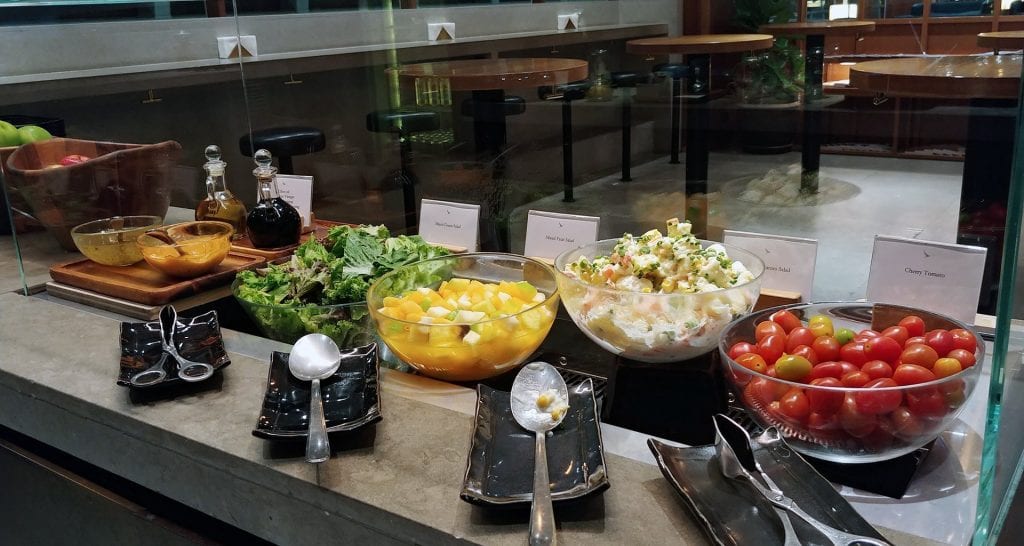 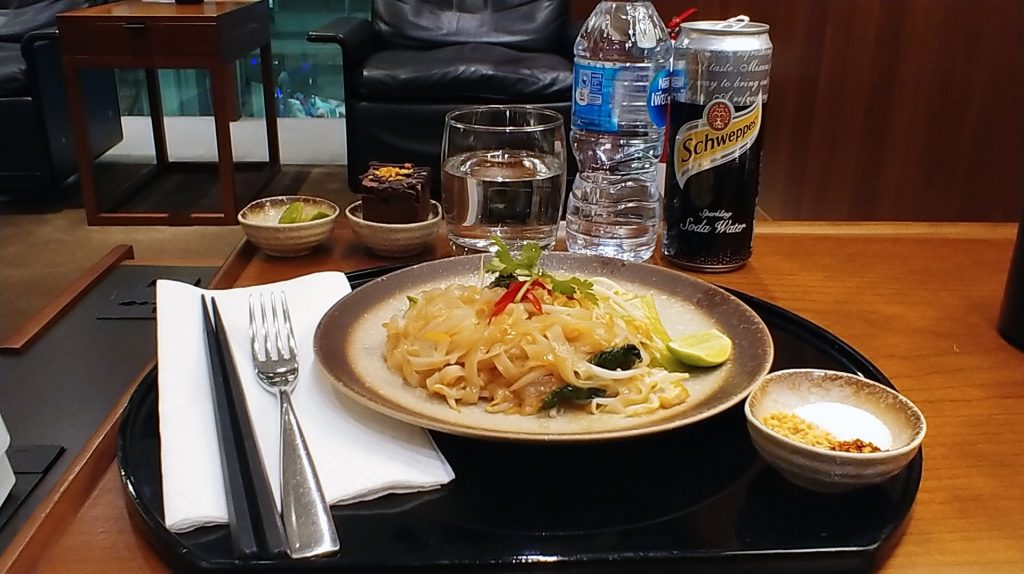 I loved the Cathay Pacific lounge at Bangkok Airport, the furnishings are modern, the place was spotless, and the food offerings excellent.

Before long, I had to head over to my gate for my flight to Amman. Once I settled into my seat, the cabin crew offered me Apple or Orange juice, an amenity kit and menus were also distributed. Flight time for this sector would be 7.45hrs. 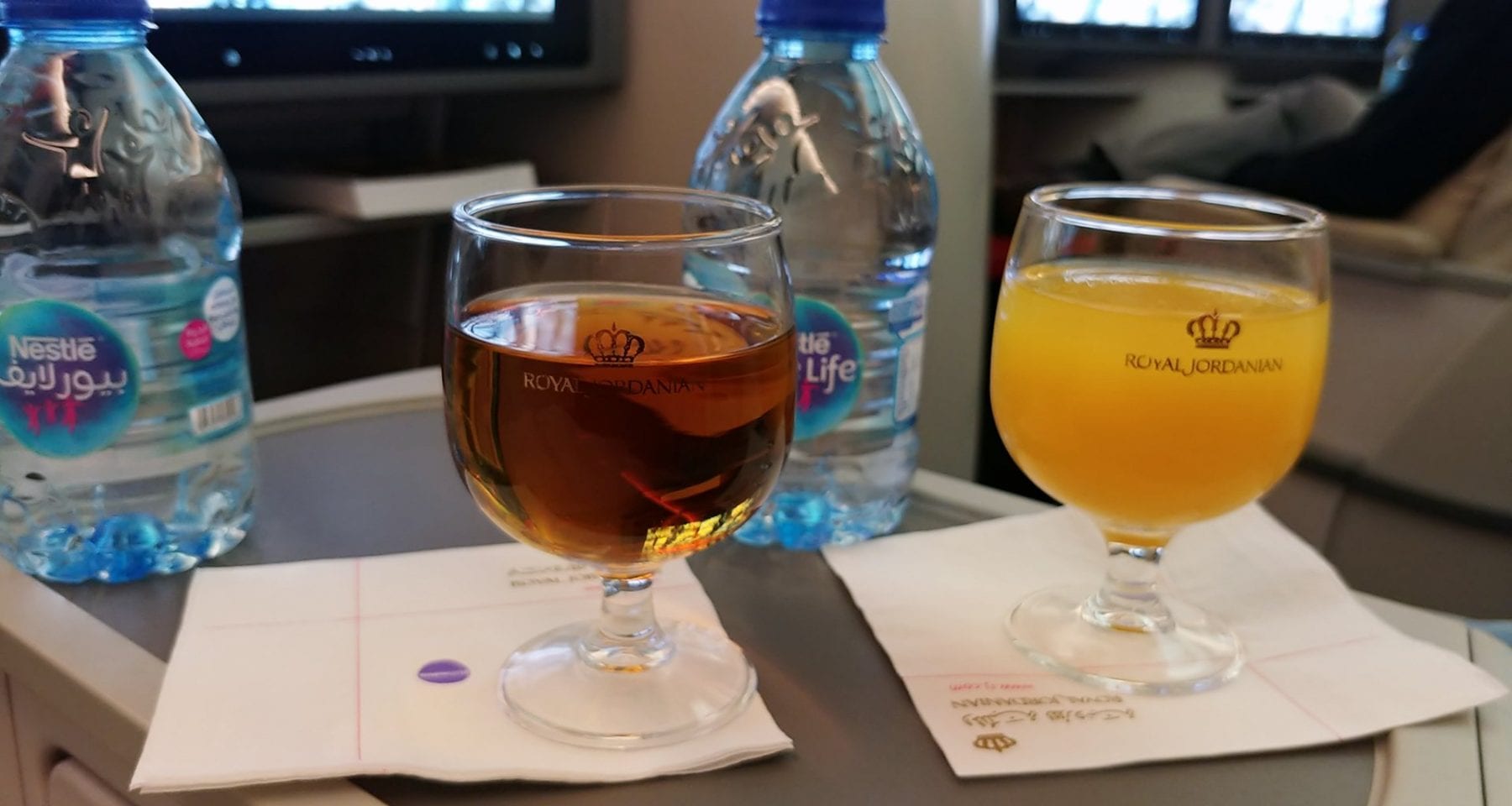 Ten minutes after takeoff, a crew member started to take the orders from the cabin, and she worked alone while the other crew member was working away in the galley. I was in the last row, so it took her about ten minutes to get everyone’s orders. My first choice of Ravioli was available, the other options on the flight included:

Hot towels were distributed 30 mins after takeoff, and my meal tray was layed up a few minutes later. Everything was once again hand-delivered, and I received my meal about 45 mins after take off. The cabin crew member was working alone the whole time, running up and down, delivering meal trays and working like mad. I watched as the cabin manager did nothing, now I’m not sure about the airlines’ procedures and policies, but his behaviour continued like that for the rest of the flight. He did make all the PA announcements though! 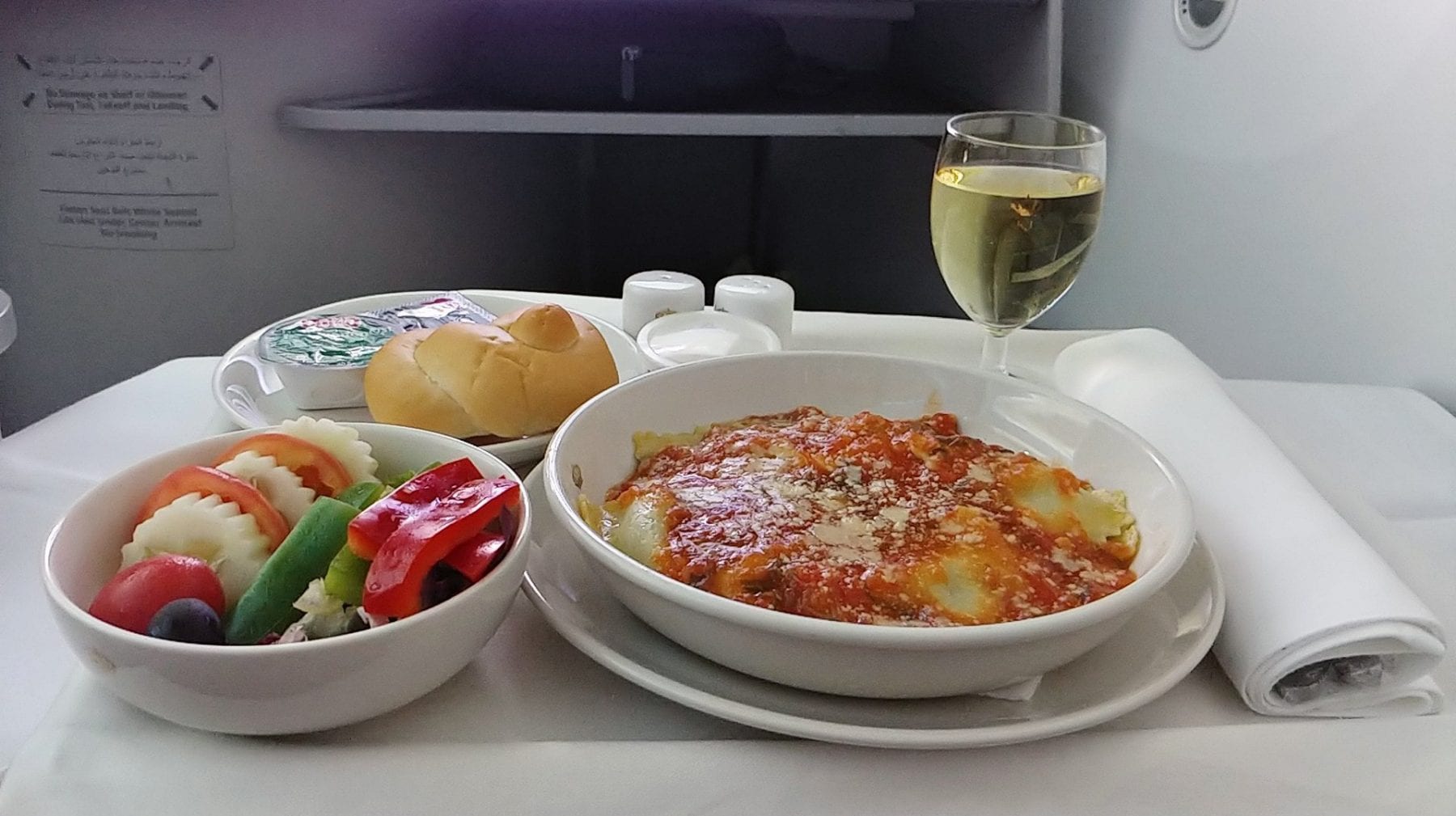 The dish itself was delicious, and it came with a side plate of vegetables, some bread and I decided to pair it with some Jordanian wine. I can’t fault the food on Royal Jordanian at all; it was plentiful and delicious. The tray set up itself is somewhat ‘retro’, but I have no problem with this, I thought it was quite cool. 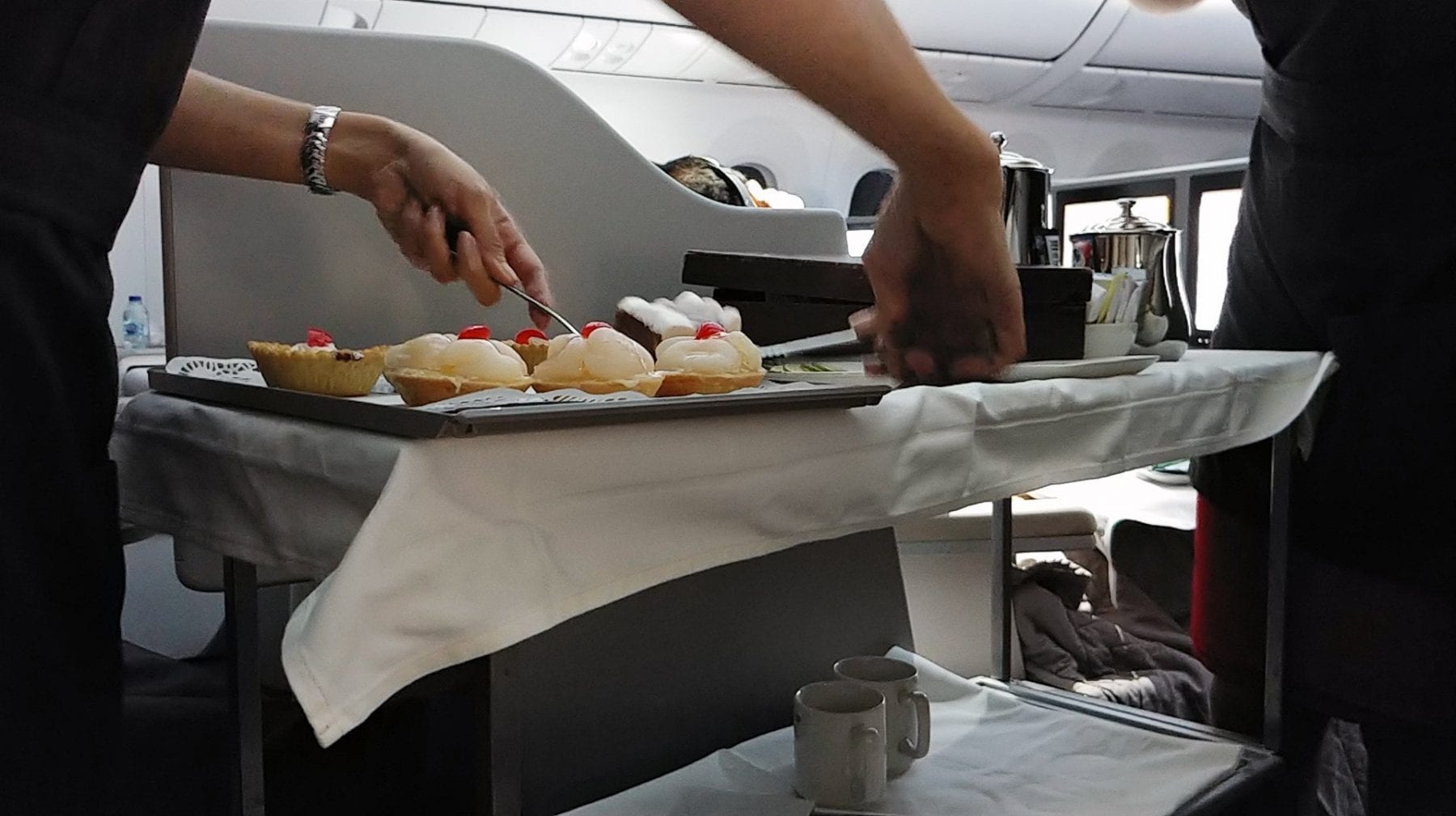 Dessert was served from a service trolley at 1.10mins after take off with the service finishing about 15 minutes later. I selected a chocolate and marshmallow cake, which was very sweet, and tasted like it just came out of a packet mix cake box. When you compare this dessert trolley with what Turkish Airlines offer in business class, you can see that there is perhaps room for improvement here.

I then went to bed, and was woken up by the crew 4.20mins later for breakfast! I wish they had those ‘do not wake for meals’ stickers, cause I probably would have used it.

However, I was happy to see the breakfast service, which started with hot towels, and the tray was once again hand-delivered. Coffee and tea were served from a service trolley which also had pastries and cupcakes and was operated by the two crew members.

Again I couldn’t see what the cabin manager was doing. However, he did manage to have lots of conversations with passengers at the rear of the business class cabin.

Breakfast consisted of some fresh fruit with yoghurt, croissant and bakery items as well as a fresh orange juice. To be honest, I wasn’t that hungry, and I’m glad that the offering was just a continental breakfast, a hot meal would have been overkill. 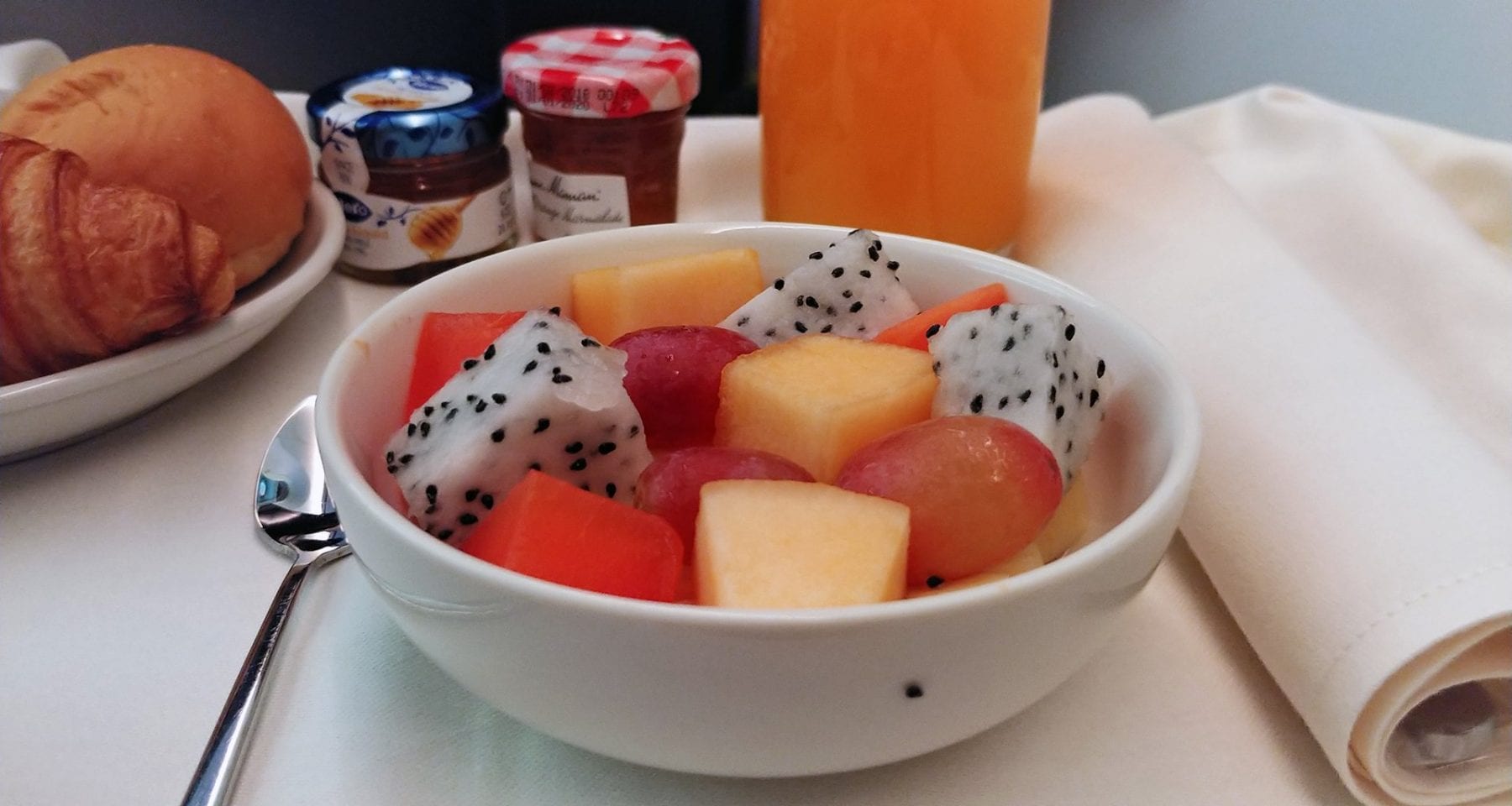 I found most of the crew on all my RJ flights to be very polite, warm and friendly. In my opinion, there is room for improvement, perhaps with the way that ground staff are trained to deal with delay situations. The onboard experience could be elevated to include more traditional service concepts that are launching on other airlines across the globe. In premium cabins, airlines are moving towards restaurant-style dining, but it does create additional work for cabin crew onboard. Having seen how the team dynamics were on this flight, I’m not sure it could be executed promptly unless all crew are doing their fair share of work in the cabin.