On one of my recent trips to Thailand, Thai Airways Catering invited me to sample the meals being served in its flights’ first, business and economy class cabins. Little did I know just how much food would be on offer — or how interested I would be to learn about the company and its subsidiaries.

Thai Airways Catering began operations on April 20, 1960, producing just 500 meals a day. By 1967 this figure had climbed to 6,000 meals, by 1979 to 15,000 meals and by 2006 to 46,000 meals — and today the company prepares more than 90,000 meals daily. The very first flight it catered travelled from Bangkok to Hong Kong; at the time only 10 kitchen staff worked for Thai Airways Catering. Many of the recipes used at the time of its founding are still featured today.

Let’s start by exploring some of the dishes served in first class. 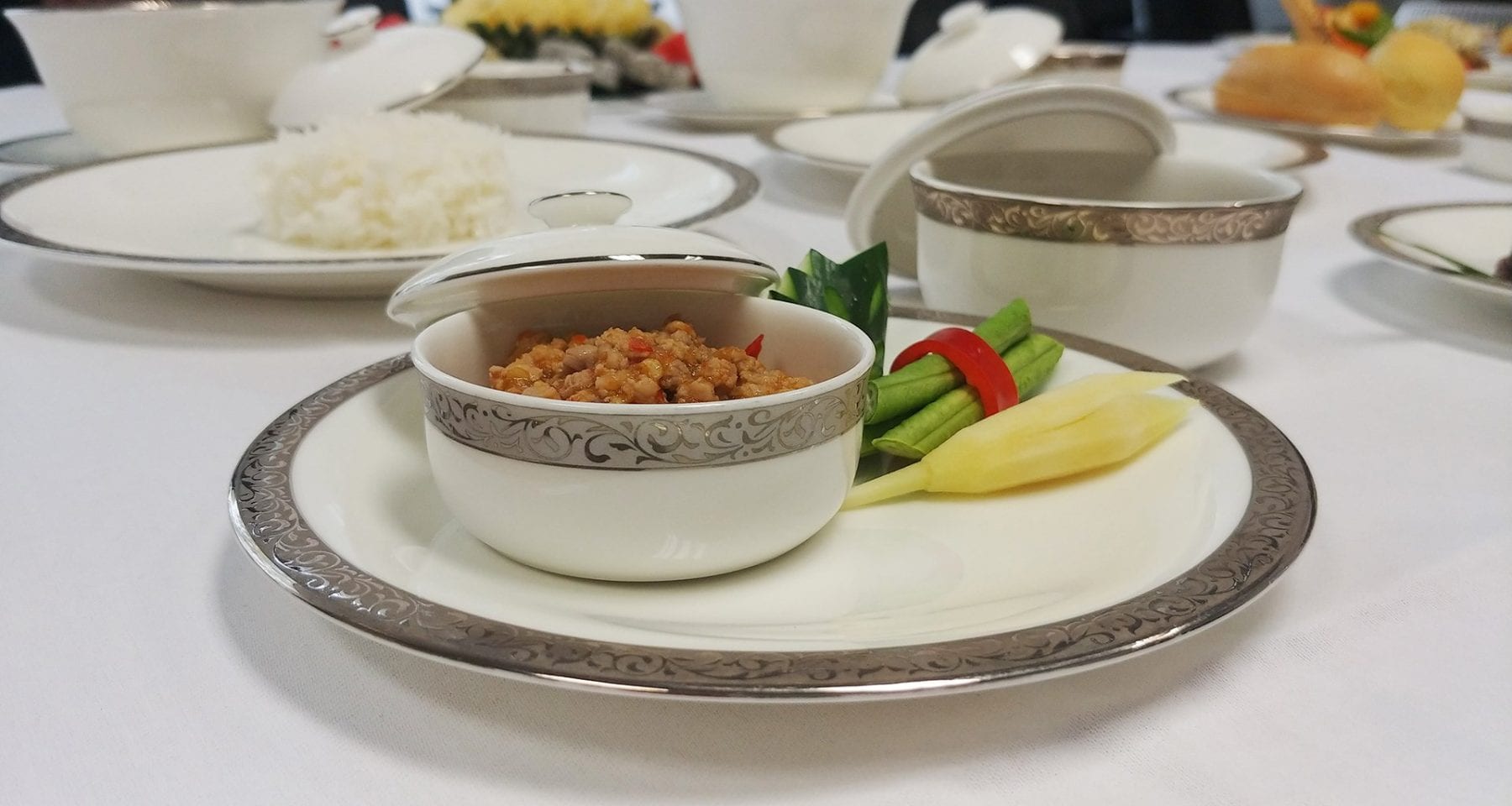 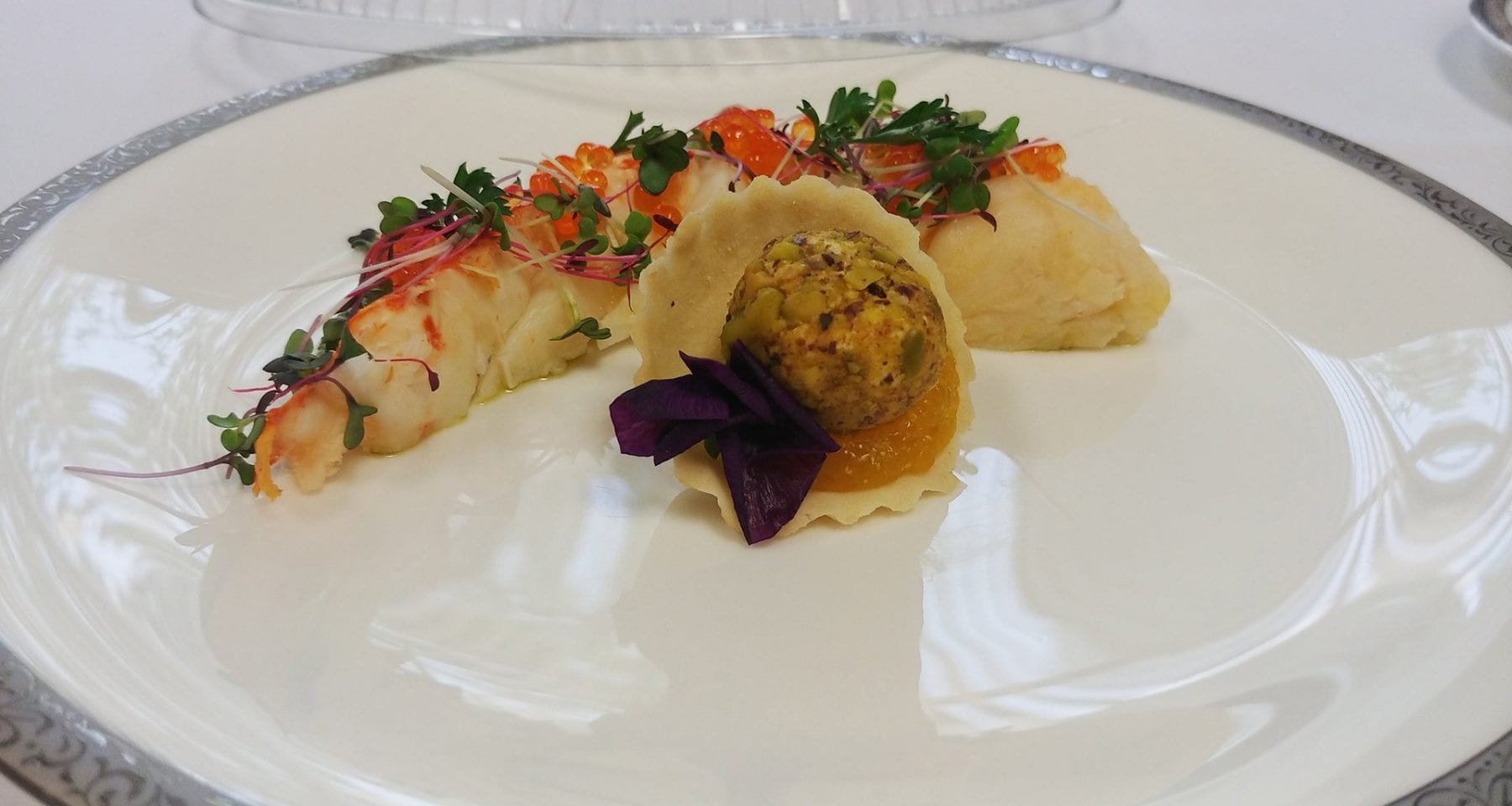 What a great idea, using the Pineapple as a presentation piece. Featuring Kiwi, Papaya, Mango, Cantaloupe and Dragon fruit.

Most of the beef served on Thai Airways flights comes from New Zealand, and about 70% of fruit, vegetables and other ingredients are sourced locally whenever possible. The company is signatory to an MOU with the Thai Marine Finfish Farmers Association that ensures its ability to serve high-quality fish regardless of cabin class — critically important considering that the company uses about 155 tonnes of white sea bass every year in dishes such as curries and other entrees.

I was pleased to discover that the dishes available in business class are equally appetising — so let’s take a look.

These beautifully presented Thai desserts caught my eye, made from a striking yellow bean paste mixed with sugar and gelatine. Absolutely beautiful, the attention to detail that goes into their creation is second to none.

Now let’s find out what you can expect to eat when flying with Thai Airways in economy class.

Travellers can also dine in Thai Airways restaurants in the Chang Mai, Phuket, Krabi and Bangkok airports, all of which serve up some unforgettably delicious meals. The Phuket restaurant recently underwent a facelift, and I was given a sneak peek at the modern interior, where patrons can enjoy meals that are reasonably priced for an airport location. Menu items include Khanom Jeen Namya Pu Bai Chaplu, Khao Pad Naam Prik Kung Siap, Khao Na Kua Kling Kradook-Aon Moo and Khao Na Moo Hong.

The restaurant is open daily from 0600 to 2100 and can be found on the third floor of Phuket International Airport. Diners will need to pass through security at level 2 departures and can then take the lift or escalators upstairs to find the restaurant immediately on their right.

It’s open daily from 0600-2100 and is located on the 3rd Floor of Phuket International Airport, you’ll need to pass through security on level 2 departures first, then take the lift or escalators upstairs, and you’ll see it right away on your right. 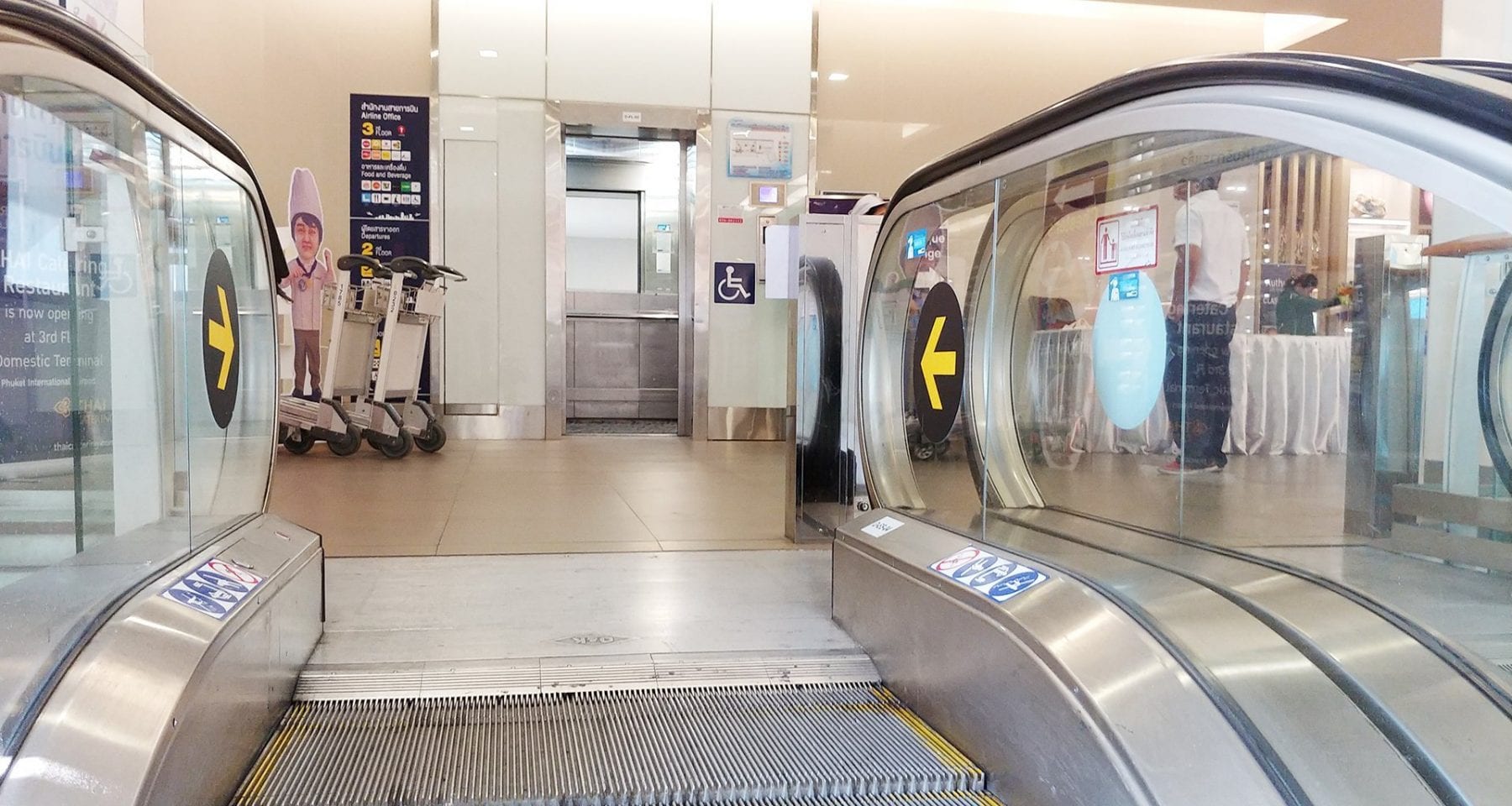 Here’s a sneak peek at the restaurant menu, with prices included.

Meals are made on-site daily in the newly renovated space. Just be sure to leave yourself plenty of time to go through security once more as you return to your gate. If you have some spare time at Phuket Airport, the Thai Airways restaurant is worth the visit.

Established in 1995 as an experiment, in a bid to curb losses stemming from inflight catering, Puff & Pie became so popular with customers that sales of its products exceeded the company’s revenue targets. Thai Airways owns 20 branches, and a further 20 are franchised — so keep an eye out for them when next you’re in Thailand.

Here’s a snapshot of my flights with Thai Airways in economy class from Phuket to Bangkok, then a few days later from Bangkok to Zurich. Before the flight, I visited the Thai Airways lounge at Phuket Airport — a small space that nonetheless offers adequate snacks and drinks.

On my flight from Phuket to Bangkok, the flight attendants served a cold refreshment and water. For a mere 1 hour’s flight time, I was impressed to receive as much food as I did. I don’t know the name of the dish — a burger of some sort, served with a refreshing salad. My meal was excellent.

My flight from Bangkok to Zurich departed at 0050, so I wasn’t expecting hot meal service. A mere 30 minutes after departure, I got it anyway. Within 5 minutes I received my meal, chosen from between a Western offering or a chicken curry with lemongrass. My choice, the chicken, was delicious and authentic. My meal tray also came with a side salad, apple cake and a bread roll. 20 minutes later, attendants offered tea and coffee, and within 40 minutes of commencing service, the crew collected my meal tray, leaving me pleased and satisfied.

For breakfast 1 hour and 50 minutes before we landed in Zurich, I chose the Western option. This second meal was acceptable — the eggs slightly hard but the sausage and hash brown quite good. In retrospect, I should have chosen the Thai option: I always find local menu offerings better than their Western alternatives on Thai Airways flights. The crew took about 30 minutes to complete the second meal service.

My thanks go out to Thai Airways for putting on a delicious spread at its headquarters in Bangkok — I appreciate the time and effort that the staff put into receiving me.

For more pics, check out the gallery below or watch the YouTube video. 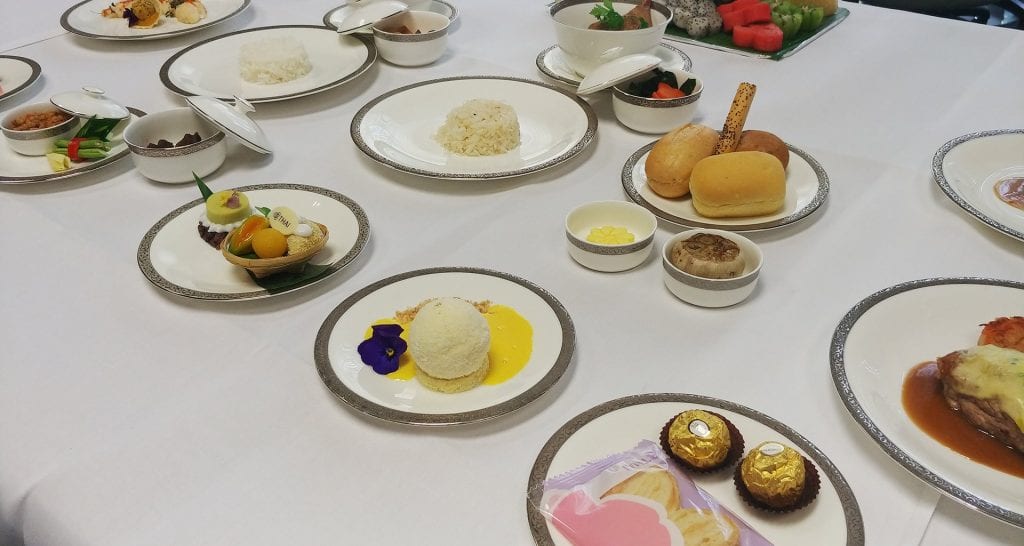 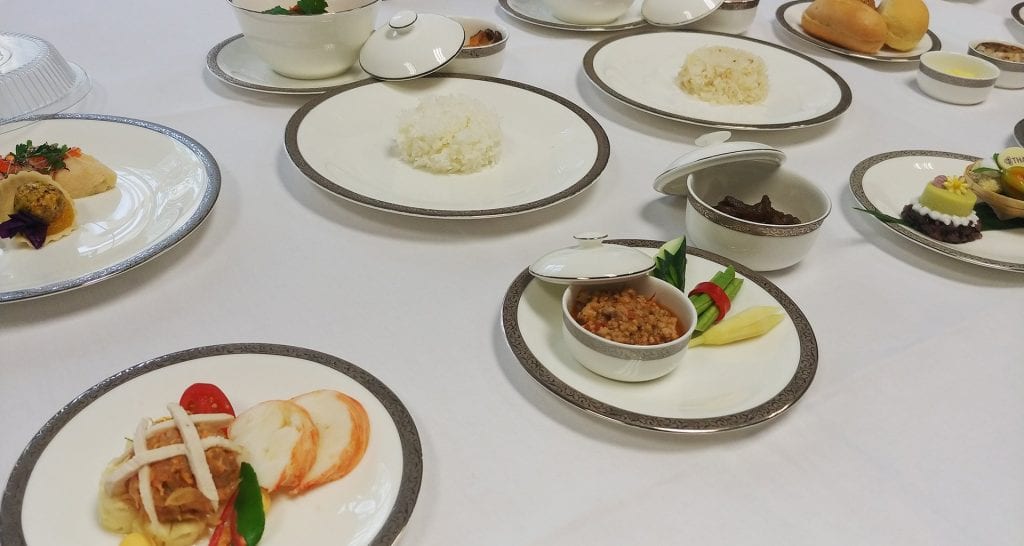 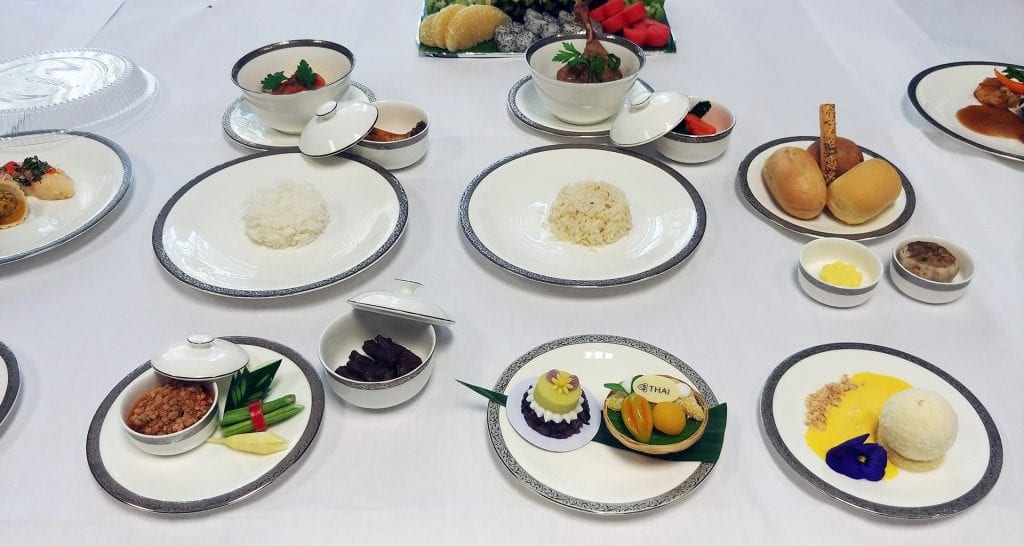 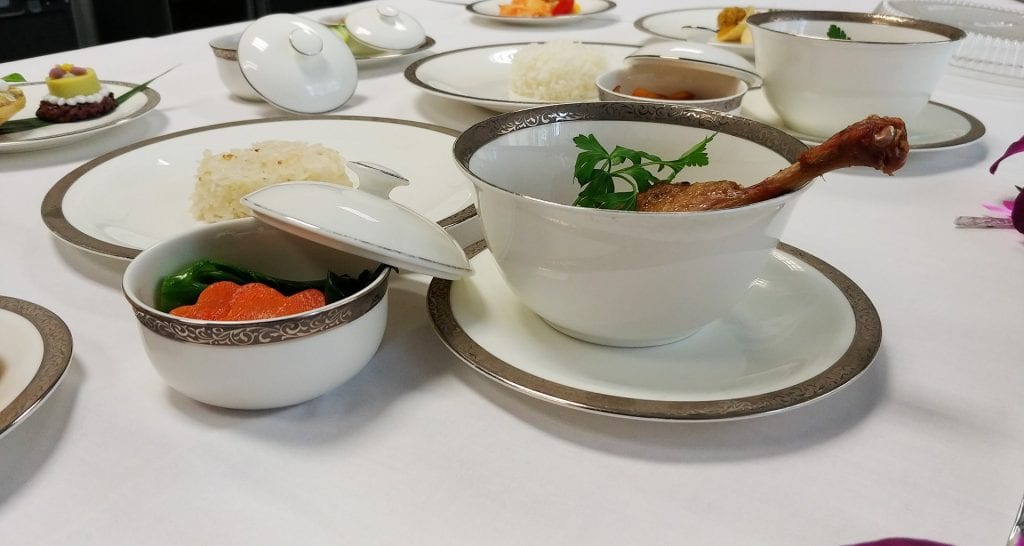