It was my first time on United Airlines in over 20 years, back in 1998 as a teenager I flew them from Melbourne to Los Angeles. My expectations were low, considering I just flew with Delta and experienced their fabulous new economy class inflight service.

United Flight 940 was to depart from Newark to London at 10 pm. Before my flight, I visited the United Club to check out the food and drink options.

There were a few things that were quite interesting though such as the bar area with bar staff taking all drink orders, a hot cocoa bar, tea and coffee stations and water stations scattered throughout the lounge. The lounge itself was rather basic, had a 90’s vibe to it, the food offering was simple, the only hot food available was soup, but the fresh salad bar, cut vegetables, hummus, cheese and sweet options were adequate. I plated up what looked appealing and was happy with the quality and taste. On the dessert side of the food buffet were cookies and brownies.

It wasn’t too long before my flight was boarding, so I promptly went to my gate. I was greeted by a friendly crew and took my seat in economy class.

This flight was the 7th I had taken that week, and I was once again lucky enough to have a spare seat next to me.

Before take off the purser made an announcement explaining to open your tray table if you wanted to dine. That’s the first time I have ever heard such a PA inflight but can understand why they do it as it was a nighttime departure. They probably wanted to avoid unnecessary interruptions to passengers who wanted to sleep.

I appreciated the thoughtful message on the inflight entertainment screen detailing the inflight service, and it set the expectations for the six-hour flight to London.

There was quite a bit of turbulence as we departed Newark, so the crew were strapped into their seats for an extra 30 mins.

Fifty-five minutes after takeoff, the carts moved thru the cabin in sync. Premium economy class passengers were served first, and a few minutes later, the carts made their way through economy class.

One hour and after takeoff I received my meal, my choices were chicken or pasta, I opted for the chicken.

It was your standard economy class meal tray; the chicken was covered in a four-cheese sauce with orzo, the chicken was swimming in cheese. The orzo was quite tasteless, and the main dish was unexciting. The barley salad was tasty, but I thought some oil or dressing might have made it more appealing.

The crew were quick to complete the service; within 10 minutes, they were back out in the cabin, collecting the meal trays and offering more drinks. After this, they provided a lemon sorbet, and then promptly turned out the lights.

It took the crew 35 mins to complete the entire service in economy and premium economy class. Very prompt indeed.

On select services United does not offer complimentary meals, so here’s a look at the onboard menu where you can purchase items if you choose to do so. 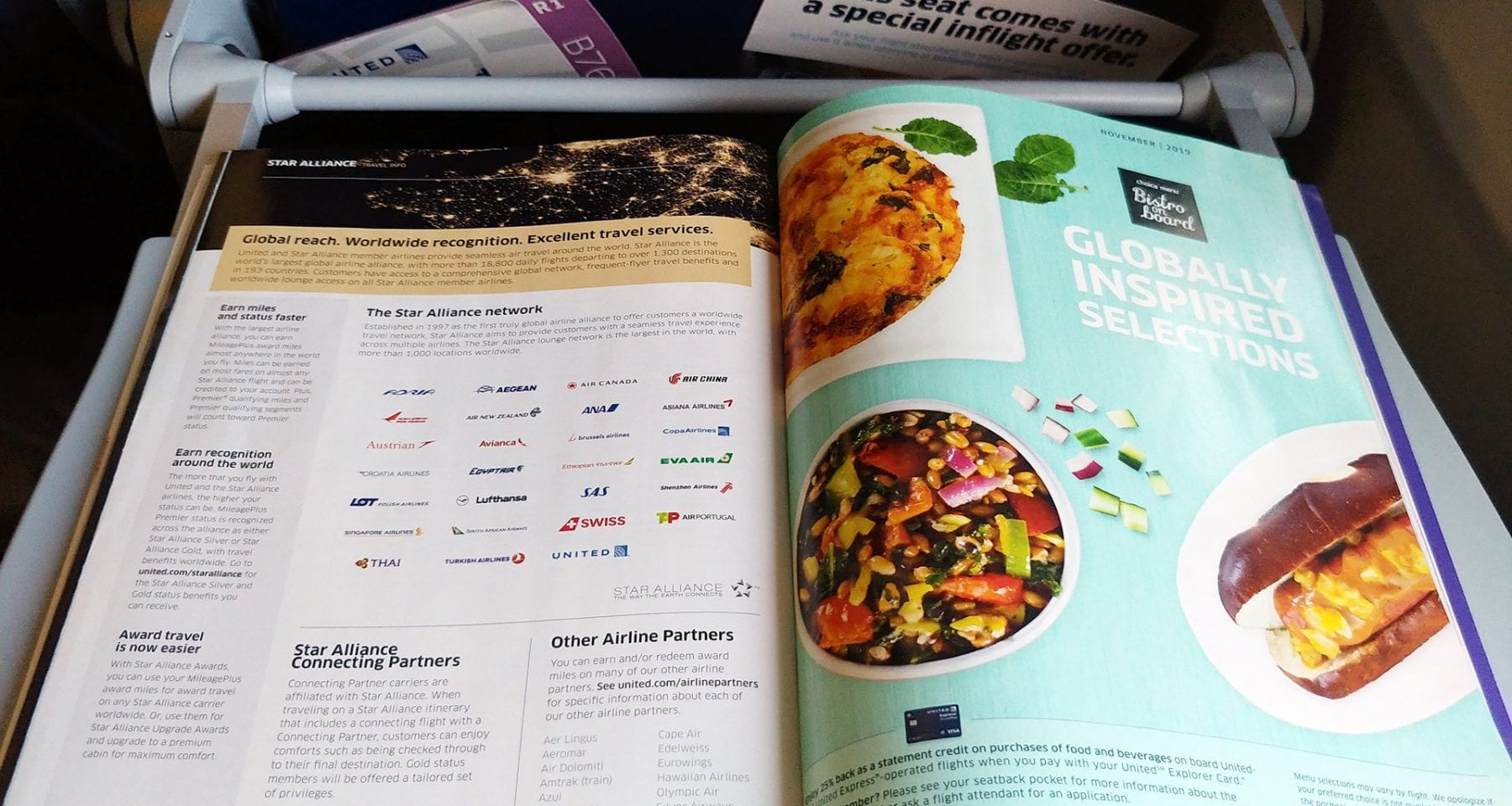 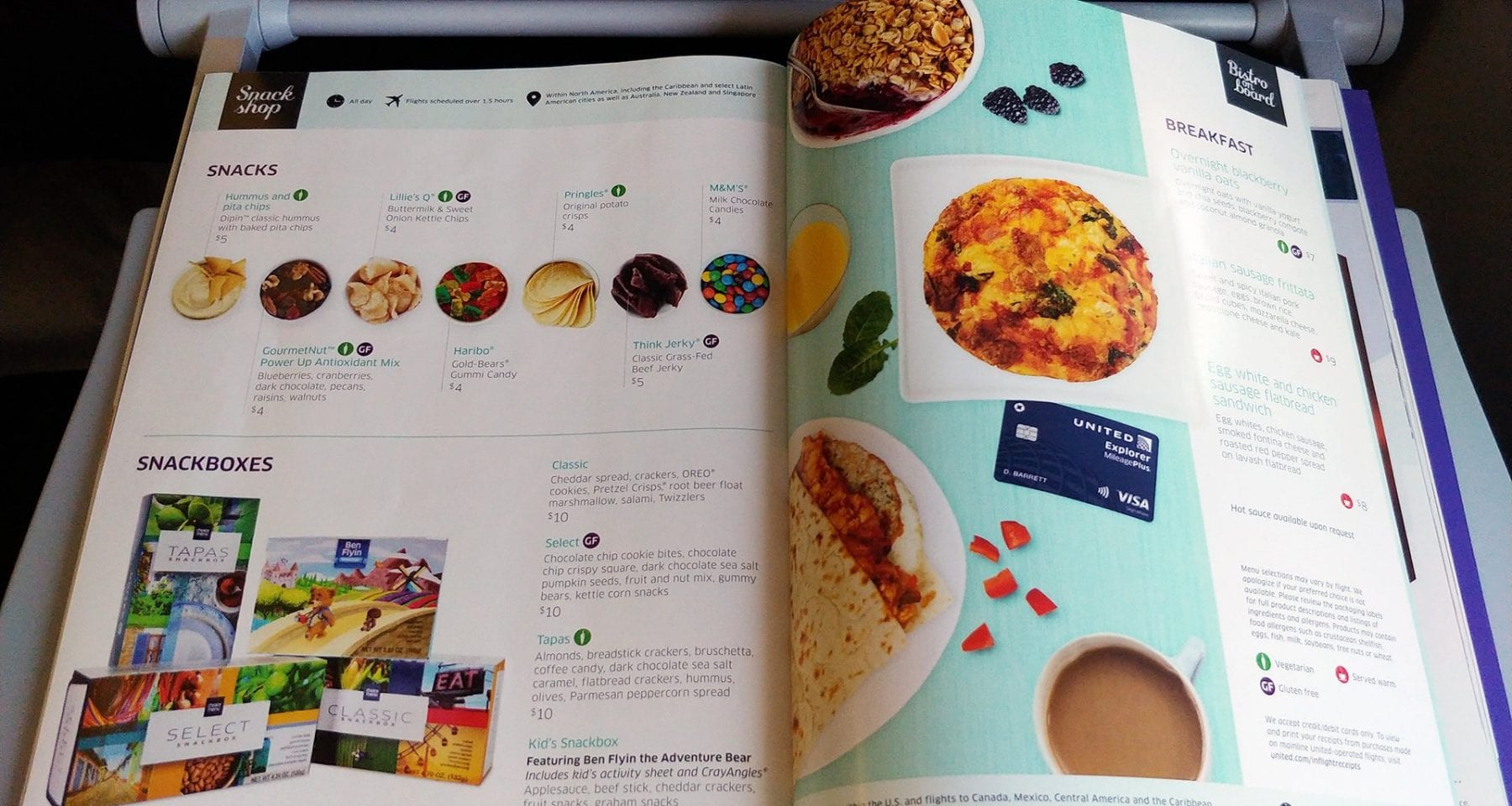 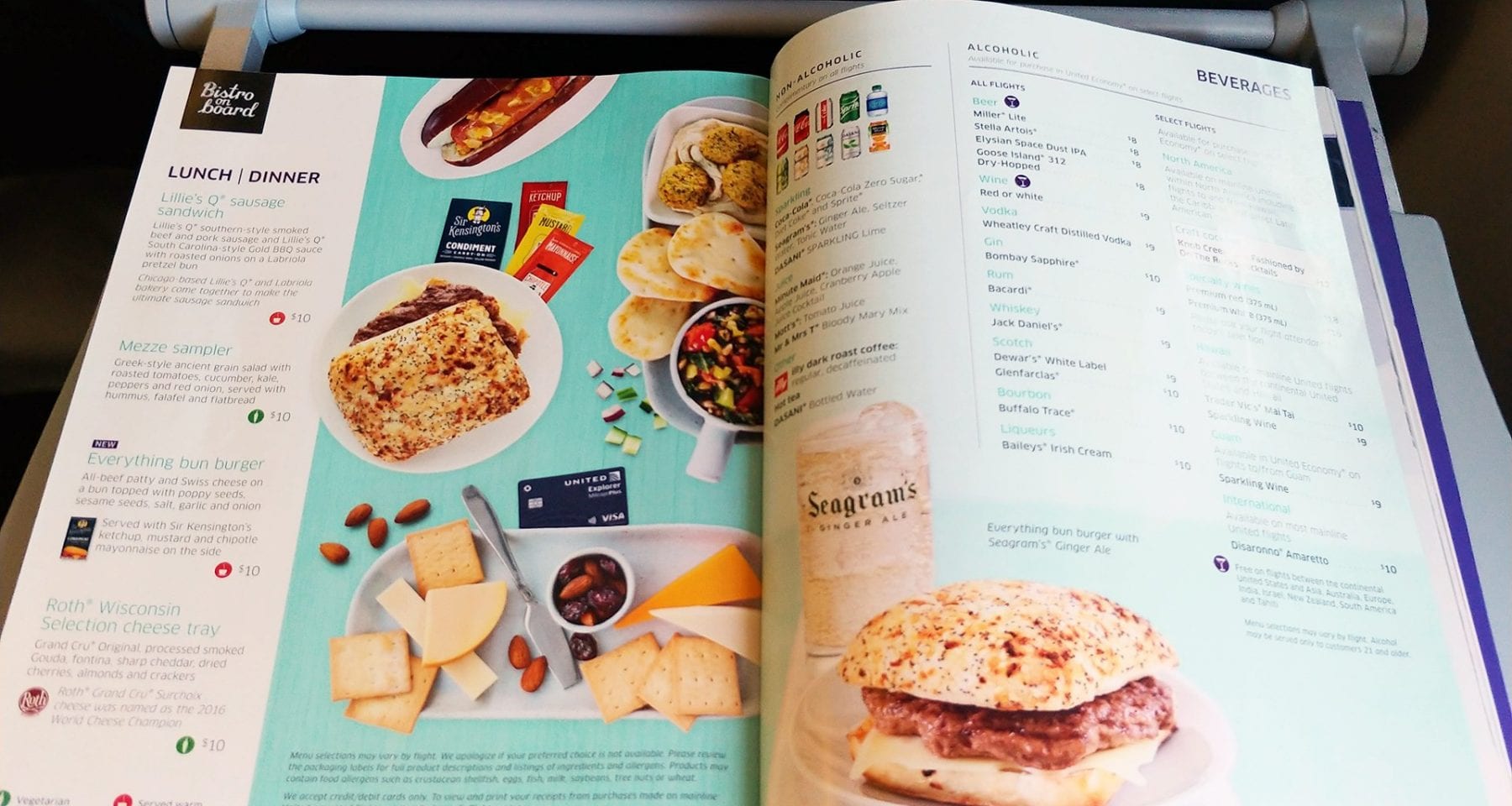 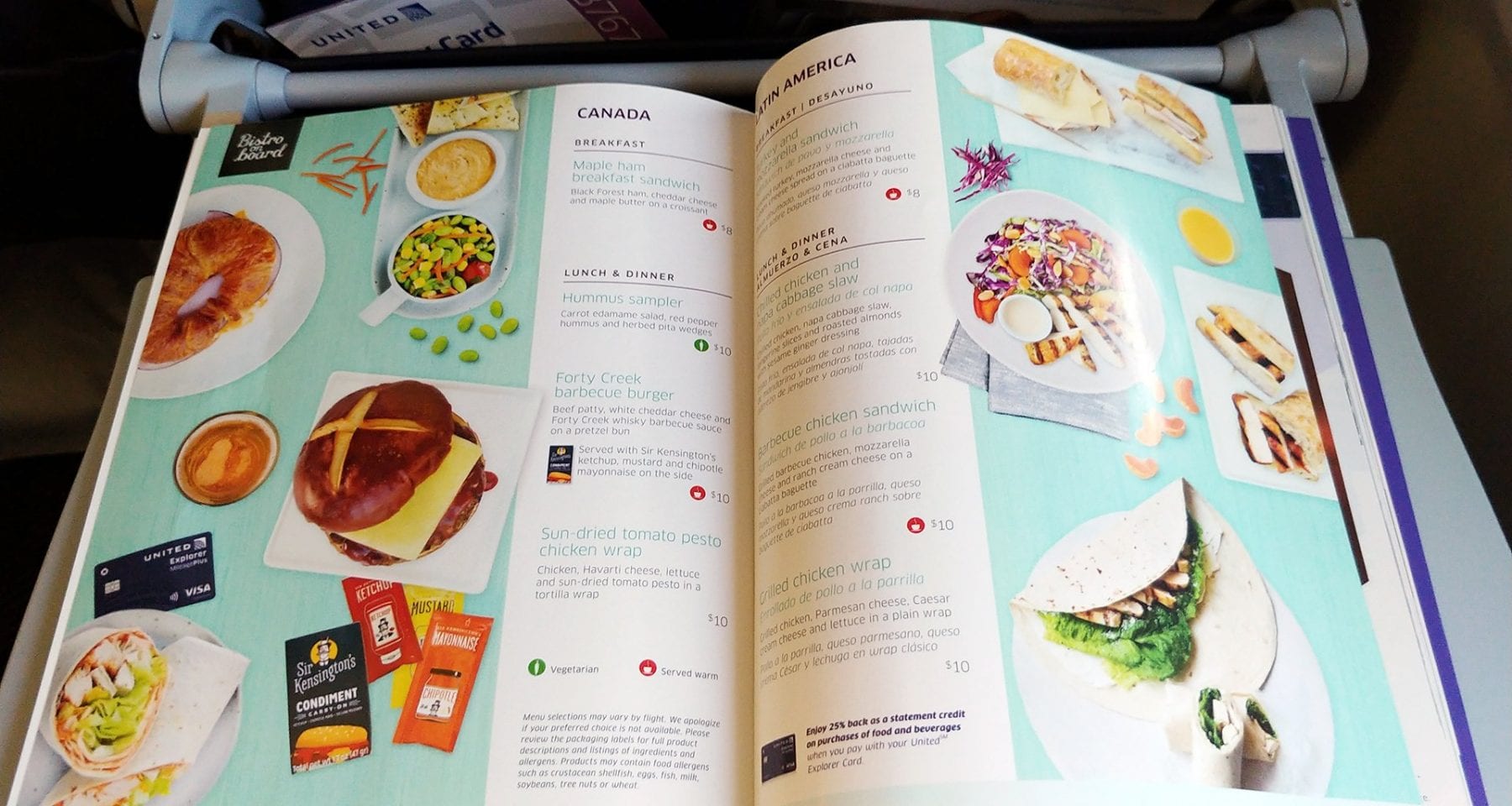 One hour before landing the second service began. Again the crew were quick to complete the service, as it was quite a simple service to complete. There wasn’t a choice; everyone received a tray consisting of a continental breakfast offering of Chobani yoghurt, a croissant and some Smuckers Jam.

Hot/Cold beverages were offered, and I selected an orange juice. I was quite full from the previous service and nibbled on the croissant a little, and it was ok. The presentation was quite basic, as was the packaging of the meal. Before long, it was time for landing.

When compared to the newly launched service on Delta, United economy is miles behind. However, it’s unfair to compare them as Delta has invested heavily in their new economy class experience. I have to say the cabin crew were professional, friendly and attentive, and overall the experience was a lot better than I expected. I found the meals to be slightly below average, and feel there is room for improvement here.